Demand the same on Air Asia 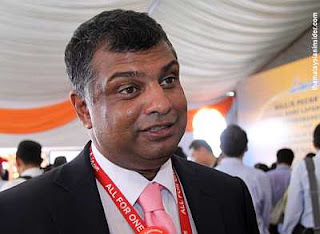 Tony Fernandez, who claims that being competitive was the driving force that made Air Asia for what it is, has just got a lesson of what real competition is all about.

It is about being professional, honest and deliverable.

For a long time, he has been lying to the public using marketing snazz of his so-called capability. To correct the public, Tony F brought Air Asia to what it is today through lies, deceit and negligence of Slumber Dol.

And, the local adverstising authority have not been doing their job to allow him to get away with his unethical RM10 gimmick cheap air fare advertising.

They could not even compete with MAS's new emerging budget airline, Firefly. To survive, Tony demand on MAS to close up Firefly. Competitive my foot!

In their recent deceitful acquisition of the Sydney route with the help hand of Danny Yusof from inside, Air Asia has just been taught a lesson:

The no-frills carrier is accused of failing to disclose the full price of fares on its website. 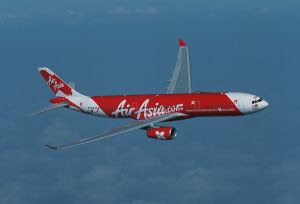 SYDNEY: AirAsia was Tuesday slapped with a lawsuit by Australian regulators accusing the Asian budget carrier of failing to disclose the full price of fares on its website.

The Malaysia-based airline, which flies international services out of Australia from the Gold Coast, Melbourne and Perth, with Sydney to be added from April, was named in documents lodged at the Federal Court in Melbourne.

The Australian Competition and Consumer Commission, the country’s consumer watchdog, claims some fares sold on AirAsia’s website do not display prices inclusive of all taxes, duties, fees and other charges.

“Businesses that choose to advertise a part of the price of a particular product or service must also prominently specify a single total price,” it said in a media release.

The regulator alleged the fares relate to flights from Melbourne to cities including London, New Delhi, and Hangzhou in China, from the Gold Coast to Ho Chi Minh City and from Perth to places such as Taipei and Phuket in Thailand.

The matter is listed to be heard on March 2 with the watchdog seeking an injunction “to restrain AirAsia from engaging in misleading conduct in the future”.

It also wants a court order “that AirAsia publish corrective notices on its websites regarding the conduct”.

AirAsia could not immediately be reached for comment. - AFP

The Sydney route was taken away from MAS through lies and deceit. Immediately following the collaboration, suddenly Sydney rote was not on MAS business plan when all along t had been a profitable route for MAS. This issue was raised to Managing Director, Dato Ahmad Jauhari during the press conference.

Ahmad Jauhari was also asked by the staff in a town hall meeting of the Sydney route JV. He denied it will be Air Asia. The following week, Tony F announced the JV between Qantas, Air Asia-X and MAS.

In a matter of time, MAS will be knocked out of this profitable route.

Taking a leaf from this experience with the Australian authorities, it is high time that the Malaysian authorities start to impose and the local consumers demand the same on Air Asia.

Malaysian should not allow these conniving businessman to continue to deny them of quality service. It is time he disclose his fares and rates and not allow customers to forever queue and wait.

Alas Malaysian ... this is what you get for paying peanuts, you get monkeys like Tony F.

Thanks to Amokh and Danny, the brilliant Medussa touch pair of Binasa Fikir, now controlling investment decisions in Khazanah, our Government will be investing RM1 billion in Air Asia-X that never made money.
at 1/24/2012 06:10:00 PM

there is a new tag-line for Air Asia:
"we apologise for the delays, any inconveniences caused is much regretted"

Down with deceitful companies said...

What will the government do. Where is Malaysia's consumer watchdog?

Here in the UK, there are laws prohibiting companies to deceive its consumers. What are the MP's in Parliament doing over there?

Everybody can Fly, but nobody LIE.

and i still cannot understand why malaysia airport berhad is still allowing airasia to use its facilities in spite of not paying the airport fees.which by the way have been collected from the passengers by airasia

During Abdullah Badewi as PM,Air Asia offer to take over rural sevice route in Serawak currently serve by MAS.After six month they told Pak Lah,thro Kalimullah,that they are loosing money.They said please give them licence to operate
Air Asia X to compensate the loses.Once licence was isseu to them,they abandon the ruralAir service in Serawak and give back to MAS.They give back the shit to MAS.
Once they operate Air Asia X,they started demanding from goverment to fly only profitable route run by MAS.Sydney is one of the route that they dream to have.The goverment turn down their request everytime they ask.
They change their strategy.They went to do share swapt with MAS.Now they have Sydney.They ask MAS to close Dubai route(the most busy route)and I am very sure Asia Asia X will take over.

Who are you to say such things to Tan Sri Tony?

Do you know that our DPM appointed him and Tan Sri Azman to sit on the panel to improve our education system.

The future of our country depend on more people like them than you.

I bet the DPM must have been shoved the names of Tony F, Amokh and Zarinah by the civil servants, who thinks in such predictable fashion without any inkling of information of how terribly incompetent, dishonest and unethical these three are.

I guessed as a servant to Tony F, Amokh and Danny, you are as stupid as his deceiving marketing strategies. Imagine hearing Tony F telling the world that Malaysians ever willing to take risks for any cheap fares. I hope they brought him to back to his knees and realised lying doesn't pay.

Way to screw people over and over while making millions to buy football and f1 teams.

Tony is copying the way Southwest Airline is operated..i.e. as a low cost carrier....but what Southwest do..and is important for a low cost carrier..is by being short haul carrier...and Air Asis X just did the opposite..and now they are crying foul over many routes which recently cancelled due to its unprofitability...while Southwest CEO is soooo customer centric....Air Asia has always been sooooo profit oriented....

Voice, heard that AirAsia will fly to Jeddah soon. Now everyone can do hajj?

Be grateful to him for offering us a "cheap" fare.

At least he did not charge us for using his toilet on board and the oxygen we breath while flying in his aircraft.

Unfortunately for us, we Malaysian dont understand about business ethic.

Many cases have brought to the tribunal consumer court on Air Asia again and again.

When AA lose the case, they just pay the compensation and business as usual after that but the consumer ministry did nothing to Air Asia to curb it from happening again.

Hope Ismail Sabri will do something about it. Dont just go after the small traders only.

You shd make a report to suhakam n have peanuts n banana farming.

Anything eaten by monkeys shd not be eaten by human

I got censored by ABITW in another posting on MAS-AirAsia on the grounds of irrelevance.

So, AirAsia got censured by the Australian authorities. It fixed the matter and moved on. The Aussie authorities are a lot more professional (i.e. they are not out to deliberately victimise anybody on grounds of ethnicity, for example - Tiger Airways got pulled up pretty sharply in Australia for alleged safety infringements, yet no one in the Singapore establishment complained) than certain people would have us believe.

Putting down AirAsia is going to resurrect MAS? You gotta be kidding, mate - the deep doo-doo in MAS runs a lot deeper, and a lot earlier, than the competition from AirAsia.

Point in question: when MAS cut back it's routes to the USA to only the KL-Los Angeles route, did anyone complain? Did anyone ask how it is that SIA can have profitable routes from Singapore to Los Angeles, San Francisco, Houston, New York/JFK and New York/Newark in the US?

Nope, everyone gave MAS the benefit of the doubt, big time!

And if SIA's low-cost offshoot, Scoot, is going to compete on the Singapore-Sydney route, do we hear SIA whingeing about it? Nope again, it's just competition - which you can't run away from, despite the fondest hopes of MAS sympathisers!

"AirAsia's customers get a ticket via this Internet machine ... and they then get sent ... you call it email?? Gee whiz, that's a marvelous development, Wilbur. What if they are due a refund? I see, so AirAsia haven't cracked the technology for that." Love this anti-AirAsia blog http://airasiaannus.blogspot.com/2010/07/airasia-online-booking-upgrade-are-they.html

When Firefly stopped its popular operations to Sabah following the stupid share swap, Air Asia 4th quarter result rose with an increase in passenger volume... they did it at the expense of MAS. That is crony business for you and the top man just kept quiet.

And we in Sabah suffer for lack of choice. Where is the competition Fernandez? Deceitful indeed!

Tony Fernandes thought he could deceive the Australians like he does with Malaysians! Ha Ha Ha... serve him right.

An unethical businessman has no place in the international community.

Making money through deceit will not last and not blessed. The Al-Mighty indeed acts in mysterious ways.