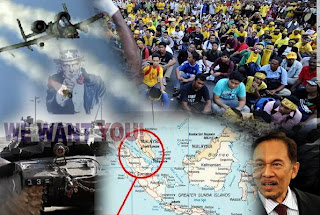 Ambiga claimed Bersih 3.0 is a people movement for electoral reform. It is not a people organisation but partisan motivated.

Neither was it genuinely about electoral reform. It is about regime change and the regime chaneg will be by undemocratic means and with foreign subversive forces that are no more covert.

If it really about electoral reform, it does not matter where Bersih 3.0 will hold it's rally as long as they get the media coverage. The important point is to get the message through.

If Bersih 3.0 is a people movement, as claimed by Ambiga, it is supposed to be driven by NGOs. Ambiga claimed to be supported by 81 NGOs but 61 NGOs are not registered organisations.

It is supported by fly-by-night organisation which are propably the same people with the organising committee members and those 10 registered NGOs.

If it is a people movement, it must be apolitical.

True, Ambiga call on both side of the political divide to help her cause for electoral reform but her's and demonstraters call, chant and rhetorics in their speech are anti-Barisan Nasional.

Benji Lim openly raised in Anwar Ibrahim's press conference that Bersih 3.0 was hijacked by opposition politicians and he could response properly and threw him out.

Ambiga responded by claiming ignorance and said she will look into it. But, she went around during the demonstration protected by Unit Amal.

Who is she trying to fool? Unit Amal is synonymous with PAS for purpose of demonstrations.

From the first Bersih in 2008, the ownership of Bersih is with PAS's Mat Sabu. He remained to play a major role to lead the PAS crowd gathering at Masjid Negara.

Barisan Nasional could not support Bersih 3.0 for many legitimate reasons and Pakatan Rakyat should not have supported them too.

Subsequent to Bersih 2.0, Barisan Nasional conceded to look into the electoral reform demands. A Parlimentary Select Committee of 3 BN MP, 3 Pakatan MP and 1 Bebas MP was formed. All issues and suggestions from all parties were looked into.

Out of 8 issues raised in Bersih and Bersih 2.0, seven were addressed. Strangely, Bersih 3.0 demanded the same 8 issues. They are not thinking this time, are they?

The single request rejected was the 21 days campaign period. Why would they need 21 days when they hold ceramah non-stop since 9th March 2008, a day after the 2008 general election?

Too much politicking and campaigning only raise public temperature. Politicians can take the exchanges but the public will turn emotional and a similar 21 days campaign resulted in 13 May 1969. It is no threat but fact.

Back to the Bersih 2.0 demands, Pakatan Rakyat MPs were together in PSC helping to draft the proposal for Parliament to approve.

However, they decide to make an issue of the electoral roll to justify holding another Bersih demonstration. They claim they are more than 42,000 unknown names in the electoral roll. The issue can be long and winded to discuss but it is already off the list.

EC claim that the onus to up-date the electoral roll falls on the voter. Ambiga and Pakatan MPs and leaders conveniently in unison, insist EC should do it. EC would only do so if empowered by law.

Like was mentioned earlier, it is a long and winded.

The long and short of it is without an IC, one cannot vote. Given that there could be errors in the electoral roll. Voters need to produce IC to vote. No one can have two IC.

Suppose because of human error, former servicemen and former police are regitered at two different places under two different ICs. They cannot have two ICs. One IC has to be returned before they can get their civilian IC.

Nevertheless, the PSC, which was represented by both side of the political divide, instructed the EC to clean-up the electoral roll and have given them a certain time frame.

That time frame has not expired but Bersih 3.0 already marched and clashed with police on April 28th, 2012.

Off course, as a lawyer, Ambiga has her reason or excuse or "legitimate basis", to do so. She said she does not want to deal with EC, who are civil servants or peon as many of the Bersih 3.0 demonstraters call them.

She claimed she wants to deal with politicians. And she has not engage with EC since the last Bersih 2.0. But the politicians have already taken actions. Naturally, her answer is she does not agree and dispute their actions.

Obviously, Ambiga is talking like a politicians, an opposition politician. She have criticised UMNO on many occasions. She does not want a solution except her own and do not believe in the process of democrasy unless the minority gets they way.

Our message to her is run for election and make sure her party of choice run the country. Another important point she need to understand in realpolitik is that she must have influence in her political party of choice in order to get things her way.

As the coalition party leading the Government, Barisan Nasional have give their trust to the civil servants.

As a party that understand governing, after having lead the country for more than 60 years, BN understand that the implementation of policies or court decisions or Parliamentary approvals are done by civil servants.

The independent party that is empowered by the Seri Paduka Baginda Yang Dipertuan Agong to administer the election is EC. The EC is also within the system of Government.

It can be concluded that Ambiga and the opposition never had any intention for a electoral reform. They were using it to cause a riot.

If one notice, Bersih, in particular the first Bersih and Bersih 3.0 had other agenda attached to it. It was only about having clashes with the police. That way it serves the purpose to paint a bad picture of police and Government.

Indirectly, the ruling party gets the blame and bad rap. That is the dirty politics that Bersih 3.0 it self is against. Same with spinning accusation and slander without facts and spreading it all over.

The Mole had written a summary to explain the real motive of Bersih 3.0 entitled "Bersih, a US tool for regime change?"Indeed, that is what it is all about and Tun Dr Mahathir have said it already before.

KUALA LUMPUR: As ties between Bersih and non-governmental organisations (NGOs) affiliated with the US government are brought out into the open, concerns about such organisations and their ties to Malaysia's opposition coalition have at least one journalist examining just how apolitical Bersih really is.

Writing for Montreal-based website Global Research on April 29, Nile Bowie highlighted the support given to both Bersih and Pakatan Rakyat by various American NGOs, and said, “While concern over electoral corruption and the various legitimate grievances of Bersih supporters may be entirely justified, the coalition’s association with opposition political parties and groups financed by the United States government suggests subversion.”

“The Bersih Coalition has also received support from the US-based Freedom House, an NGO that receives direct funding from the US State Department,” he said.

Bowie acknowledged warnings by former Prime Minister Tun Dr Mahathir Mohamad that foreign NGOs were actively working towards regime change in Malaysia because of the government’s hard line on Israel and criticism of US foreign policy.

In March, Dr Mahathir had highlighted (in his blog here) a crackdown on foreign NGOs by the Egyptian government, and named several groups including NDI, the International Republican Institute (IRI) and Freedom House, which he said were funded by the US government.

“US intervention in movements to overthrow the governments of countries that do not share its aspirations is quite clear,” Dr Mahathir was said (as reported by The Mole here).

“Of course in Malaysia it is also funding NGOs that are committed to bringing about ‘Regime Change’,” he added.

Dr Mahathir had previously said the US and Israel were supporting Anwar Ibrahim as their “candidate for building a puppet government”.

“For a long time now they have fostered a close relationship with Anwar,” he said.

Shortly after Mahathir wrote about Anwar’s ties to US organisations, Malaysian bloggers highlighted letters which bore Anwar’s signature and which were addressed to the president of the National Endowment for Democracy and also to currency speculator George Soros.

Another blogger (Sel13.com here) said Anwar had connections with the Konrad Adenaeur Foundation (KAF) and the National Democratic Institute for International Affairs (NDI), which the blogger said have involved themselves in Malaysia's election process.

The blogger highlighted an Umno press conference during which it was claimed that KAF and NDI "have introduced a 'hate campaign" to antagonise the people against the country's leaders and raise issues that are not relevant. They also do not hesitate to use religious sentiments to arouse feelings of hatred among the people."

"The hate campaign that was born from the ideas and thoughts of KAF and NDI are dangerous and are by nature subversive and subtle," the blogger wrote.

“Following his stint as Deputy Prime Minister, (Anwar) Ibrahim served as Chairman of the Development Committee of the World Bank and International Monetary Fund (IMF) in 1998, while appearing on the payroll of Dick Cheney’s Foundation for the Future and George Soros’ International Crisis Group,” Bowie said, adding that Anwar had also “served as a panelist at the National Endowment for Democracy's ‘Democracy Award’”.

The close ties between Anwar and Bersih, Bowie said, make the latter anything but apolitical.

“While the demands of the Bersih coalition appear to be coherent and apolitical, the convergence of its leadership with the opposition political establishment provides Anwar Ibrahim and Malaysia's opposition front Pakatan Rakyat with the means to mobilise demonstrators under the benign common cause of ‘clean and fair elections’,” he said.

Bowie said the violence that took place at the recent Bersih rally was bad for both sides, and could ultimately enable the opposition to grab power from the current government.

“As the United States shifts its military focus to the Pacific Region, Anwar Ibrahim’s adherence to western political institutions will likely warrant the continued nurturing of unrest in Malaysia until the opposition successively usurps power,” he said.

Most opposition leaders and supporters would try to swipe aside this foreign link between Anwar Ibrahim, Pakatan Rakyat and foreign-linked local NGOs with these foreign "agencies" as UMNO's hocus pocus politics to scare the voters or in fancier term, UMNO's seige mentality.

The difference with the past is that the Internet have revealed all these links and made it open. One website very dedicated to this cause and for it's incisive research is AIDC. Swiping it aside is all that they can respond. Neither could they dispute it now prove it wrong.

Malaysia's independence is really under siege and the price jewel is the control for the Straits of Malacca.

Problem with such revelation is the public do not follow and diligently trace everything you.

They take the lazy stance of not believing what they do not know but are lazy to find out.

Yet they refuse to believe those who know.

However, after following AIDC and their well research revelations, I am convince.