Question liwat in the midst of lying and off you go! 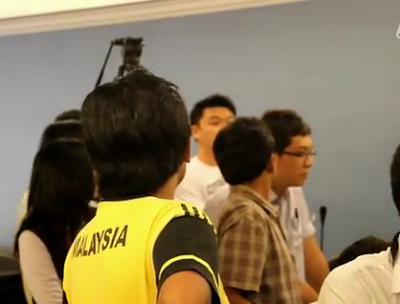 In his press conference yesterday, Anwar denied he signaled the crowd to break the police barrier. He claimed the signal was to negotiate with the police.

Let's deal with that later.

During the press conference, a young man raised issues of safety and hijacked by opposition before he was whisked away.

This is incident is similar to the Wikileak forum in London with Julian Assange where Anwar requested Raja Petra, that initiated the forum, not allowed to participate.

This is yet another proof of Anwar as a dictatorial leader who cannot accept and face dissenting views, even from common folks like film Director Benji Lim.

The video in Astro Awani was clearer. In the meanwhile view the one from KLPos first:

Bersih organiser promised it to be a peaceful demonstration. But Anwar had no consideration for the safety of the demonstraters when he encouraged them to break the barricade.

The young man was whisked away when Anwar couldn't give a proper answer to his claim that Bersih 3.0 was "completely hjacked by the opposition."

That is democrasy ala Anwar.

He calls for accountability but he has no accountability of himself. Since many believed his lies, it only encouraged him to continuously lie. As Mat Sabu use to say himself, Anwar will be a worse dictator than as alleged of Dr Mahathir.

This incident is a fine example.

PETALING JAYA: Opposition Leader Datuk Seri Anwar Ibrahim denied Monday that he had instigated his supporters to break through the police barriers at Dataran Merdeka on Saturday.

Instead, he claimed he was trying to get the crowd to disperse and move back after he and Bersih co-chairman Datuk S. Ambiga had finished giving their speeches at the rally in Kuala Lumpur.

Anwar also dismissed claims he was gesturing at PKR deputy president Azmin Ali to break through the barriers near Dataran Merdeka.

"I was gesturing at him to negotiate with the police," Anwar told a press conference at the party headquarters here.

This particularly video is being shown all over of him waving his hand to the crowd to keep moving.

Noticeable is Azmin and the rest waiting for orders. After he gave a signal, which is likely only to be understood by them, they and the crowd understood it as rush to break the barricade to the left.


And the video below, before he signalled the go ahead to Azmin and the Indian fella, Anwar signalled the crowd to move on (to the left towards Dataran Merdeka) then take a turn to the right.


Three was no instruction to turn only right and disperse as he claimed.

Do those signal look like negotiating with the police?

Why was it he did not put both hands up to halt the crowd when they were shouting "Masuk! Masuk!"? Sorry, would that mean do not negotiate with the police then?

In the aftermath of the rally, when protesters clashed with the police, videos have been making rounds in the social media, blogs and news portals, purportedly showing both Azmin and Anwar gesturing at their supporters to break through the metal barriers.

However, Anwar defended the action of the protesters who went against the court order and barged through to Dataran Merdeka, which had been sealed off since Friday.

"Even if some of the youths had broken it, I will defend that decision.

"As a responsible leader, I asked them to turn right and disperse," he said.

This is doublespeak for go ahead and break the barricade.

Anwar will say he did not ask them but why would a responsible leader defend his followers when they defy his instructions?

Party vice-president Tian Chua, meanwhile, claimed the barriers on the other side of Dataran Merdeka had been breached earlier, even before the ones near Anwar and Azmin.

Chua said, however, that breaching the barriers near Dataran Merdeka was still not excuse for the police to run several blocks away to fire tear gas.

What Tian Chua meant to say here is that it is okay to break the barrier because it was already broken somewhere else.

His rights and freedom to assembly is subjected and limited by the law. Is that what the opposition struggle for the rule of law?

When it involves something they want, it is okay to break the law. They will then question whose law and whose court?

But when Anwar is acquited on technical ground for his sodomy case, they accepted the decision with open arm. Otherwise, they will claim it is rigged.

The atmosphere at the press conference turned tense when Anwar became evasive on certain questions about his role during the demonstration.

When asked to comment on Deputy Prime Minister Tan Sri Muhyiddin Yassin's call for Bersih and the Opposition to take full responsibility for the damages and injuries that occurred, Anwar said that the Umno leadership was disconnected with the aspirations of demonstrators who attended the rally.

Filmmaker Benji Lim, who had made his way into the press conference, created a stir when he got up and shouted at Anwar in the middle of the function.

"There was no leadership and no crowd control. It was completely hijacked by the Opposition," he said.

An altercation also nearly broke out when several party workers and journalists spoke to Lim, which ended with him shouting: "I'm a citizen too!"

Just wondering whether he had blamed UMNO for Benji Lim's outburst.

He could be a plain clothed policeman. See if he has a yellow band around his wrist.

My friend, Zaharin Yassin can shoot his own feet and say the darndest thing to get attention. A yellow band is too notieceable. The police are not that stupid.

Wonder, if a noticeable UMNO man like him was actually there with the crowd to observe what he had observed.

Another opportunistic spin for the otherwise blank opposition.

By the way, Anwar did his customary blame on UMNO. He said, “This is just Umno’s propaganda to cover up police brutality.”

UMNO do not need to do propaganda of highlighting the negative of opposition and covering the police brutality. Publicising the truth is sufficient.

This latest video from Sel13.blogspot.com is close enough to hear and see everything:

He is a danger to peace loving malaysians

come on la Haji, Hitler is more reasonable than the brader.

Remind me of NST under riongkali during dol time.

ask no question, one way comm only.

Bar Council is nothing more than an opposition tool. They should at least have the guts to admit to that.

Ambiga clearly have political ambitions, she knew and allowed her "cause" to be hijacked by Oposition. We've seen her pictures (big fat election posters) and her making frequent appearances alongside Opposition leadership. Obviously they are in cohoot. There is nothing noble here.

Anwar, his goon and his financier (no prize for guessing which towkay) had failed. Not only that, they should be put on trial for inciting violence and public disorder. I look forward to this day.

Police clearly is the victim here, there is no 2 ways about it. For that, the police and by extension the government won, Opposition lost.

As far as the chauvinistic chinkies is concern, it is time to wield the stick, enough carrot have been handed out. I honestly dont see any chance of Ruling party winning their vote. They want blood (UMNO and BN blood - for doing mostly what is right and necessary for this country) and nothing short of that will satisfy them.

Unless and until PM Najib and Dr M is in prison they will not cease their anti-establishment stand. Question is, is that what the majority of Malay want? clearly the answer is NO. With all this in mind, might as well invest whatever little resources BN have left into trying to win the heart and mind of the Malays and Indian vote. One practical step will be the reaffirmation of New Economic Policy. Since Malaysian Indian is economically a laggard, special consideration can be given for their inclusion.

Screw the chauvinistic chinkies and their stooges!!