Abdul Jalil Hamid, NST Group Managing Editor got himself with into mess with blogger The Unspinners here, who demanded his resignation for allegedly sabotaging the Prime Minister, by putting up a report in Sunday's Berita Harian of former PSD Director General, Tan Sri Abu Bakar Abdullah's grouse for being dismissed.

Jalil's damage control article today ignored the blogger and just hope to "... put the dark episode behind us". Unfortunately for Jalil in perhaps his first encounter with bloggers, to pun from the character Colonel Jessep played by Jack Nickelson in the 1982 movie, Few Good Men, he "... messed with the wrong marine, son."

The Unspinners is one influential pro-Government blogger he should not have messed with. Not only do they have reasonably wide readership as one of the top pro-UMNO bloggers, they seemed to have a wide network of information and deadly in their 'game', especially during by-elections.

These loyalist attitude emulates Col. Jessep and it reflects from one quote from the same movie:


"You *uckin' people. You have no idea how to defend a nation. All you did was weaken a country today, Kaffee. That's all you did. You put people's lives in danger. Sweet dreams, son."

Cpl. Barnes: I've got some camouflage jackets in the Jeep, sirs, I suggest you both put them on.

Cpl. Barnes: Yes sir, we'll be riding pretty close to the fence line. The Cubans see an officer wearing white, they think it might be someone they'd wanna take a shot at.

Jalil pretended to have a camouflage jacket. He thought by pretending as though the Berita Harian report did not exist and write his support for Dato Najib's decision would sufficient.


His damage control article this morning, below:


Of Accountability In The Civil Service And Putting People First

By A Jalil Hamid jalil@nstp.com.my

IT was a lopsided scheme that fortunately didn't see the light of day after all.

But it did cause a lot of grief to the country's 1.4 million-strong civil service until Prime Minister Datuk Seri Najib Razak intervened to put a stop to it.

The stillborn Skim Baru Perkhidmatan Awam (SPBA) for the public service was, to say the least, awful.

The salary scheme was never intended the help the lower-rung civil servants tide over the rising cost of living.

The quantum of the pay hike for the majority of the workers was, by all accounts, pittance. It was a slap on their face.

Rather, the scheme was designed by the top echelon to reward themselves with huge pay rises.

The joke then was that you don't ask the top-ranking officers to decide on their own remuneration package.

Little wonder then that when the scheme was eventually made public, the main trade union, Cuepacs, cried foul.

It wasn't a just solution for the majority.

It was instead designed to reward those in high office at the expense of the low-income group.

The flak over the SBPA also posed a huge political headache for the Barisan Nasional government ahead of the general election.

The government could not afford to unsettle the civil servants.

Najib in March took a bold step to scrap the SBPA, much to the relief of the civil servants.

In its place, he introduced a much improved Sistem Saraan Malaysia (SSM) salary scheme.

It was more equitable across the board and not as despairing as the SBPA proposed by the Public Service Department (PSD).

Subsequently, there had been calls for the chief secretary to the government, who is the head of the civil service, and director-general of the PSD, to take the responsibility for the botched-up SBPA plan.

Commentators went on to say that the plan had left a bitter taste, gave rise to much hostility and negativity against the government.

In fact, it was a direct defiance of Najib's 1Malaysia philosophy, under which the rakyat comes first.

Cuepacs and the civil servants in general can now look ahead with the new leadership in the civil service, following the departure of Chief Secretary to the Government Tan Sri Mohd Sidek Hassan and PSD chief Tan Sri Abu Bakar Abdullah.

The government is also undertaking a complete overhaul of the civil service, with the setting up of a new panel headed by former PSD director-general Tan Sri Ismail Adam.

Those in the public service can now look forward to a better and a more rewarding career as the country marches towards meeting the Vision 2020.

We can now put the dark episode behind us.

Jalil only addressed the defying senior civil servant silently revolting against Tan Sri Abu Bakar's dismissal and the by-passing of seniority in the promotion of the Chief Secretary. But, he ignored the blogger's anger with him for letting the public know of the opened Pandora Box.

Jalil ended up in a memorable moment of the movie in the final court scene: 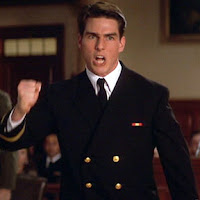 Lt. Kaffee: I want the truth.

Lt. Kaffee: I m entitled to the truth. 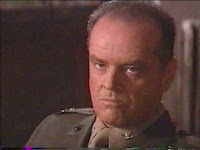 Col. Jessep: Son, we live in a world that has walls, and those walls have to be guarded by men with guns. Whose gonna do it? You? You, Lt. Weinburg? I have a greater responsibility than you could possibly fathom. You weep for Santiago, and you curse the marines. You have that luxury. You have the luxury of not knowing what I know. That Santiago's death, while tragic, probably saved lives. And that my existence, while grotesque and incomprehensible to you, saves lives. You don't want the truth because deep down in places you don't talk about at parties, you want me on that wall, you need me on that wall. We use words like honor, code, loyalty. We use these words as the backbone of a life spent defending something. You use them as a punchline. I have neither the time nor the inclination to explain myself to a man who rises and sleeps under the blanket of the very freedom that I provide, then questions the manner in which I provide it. I would rather you just said thank you, and went on your way, Otherwise, I suggest you pick up a weapon, and stand a post. Either way, I don't give a damn what you think you are entitled to.

And damn well, he was given The Code Red as The Unspinners exposed Jalil's alleged lackdaisical attitude to, not only maintain Kalimullah's men still inside but rehired one that left. They alleged that Jalil also was working with The Malaysian Insiders to spin a leak. [Read The Unspinners here.]

Jali will have to answer to those allegations eventually but not through another column piece and not with the public. One only hope the end is not another quote in the movie from the opposing prosecuting military lawyer, Captain Ross:


Capt. Ross: Your boys are going down Danny (Kaffee) ... I cant stop it anymore.

Unlike the other Danny that had his last day on Friday evening, this Danny narrowly escaped court marshall and came out victorious. But is not Tom Cruise in this episode.


Will be back with Debunking the Scorpene Scandal.


PAS, DAP and PKR is trying to take advantage from the lead from the Berita Harian report. 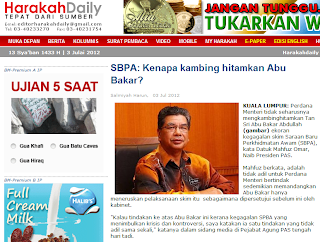 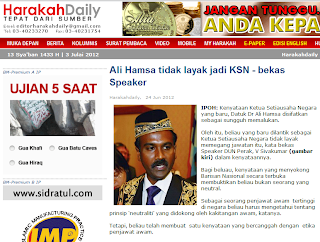 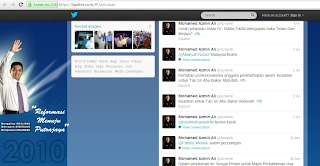 Now Jalil really did it on the PM if there is a mutiny in the service. There is already indication:

You quiet a movie and music buff eh...

What you talking about?

Don't make us laugh! Najib is sabotaging himself everyday with his hollow remarks and stupid statements!!!

so the NST guy gives some space to the ex-public servant to air his grouses? and you guys have a problem with that??!

a little bit of disagreement or contrary view you people get upset and start b*tching about.