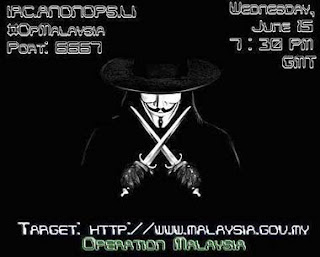 The issue of civil society groups receiving foreign funding has been a major point of discussion in Malaysia during recent times, causing controversy and drawing criticism from activists to members of Parliament alike.

Some activists tend to view Putrajaya’s investigation into rights advocacy groups like SUARAM (a noted recipient of foreign funding) as a desperate attempt to stifle dissent and attack civil society. Former PM Mahathir Mohamad’s has repeatedly warned of a foreign-funded destabilization campaign aimed at regime change in Malaysia – a claim that has been generally dismissed by Bersih goers and the like.

With the nation’s 13th General Election looming, some see talk of “foreign plots” as tired rhetoric, while others fail to grasp the deeper machinations of foreign influence and do little more than finger pointing at political opponents.

In this instance, the pages of a leaked US military document provide valuable insight into the nature of “foreign plots” potentially aimed against Malaysia. 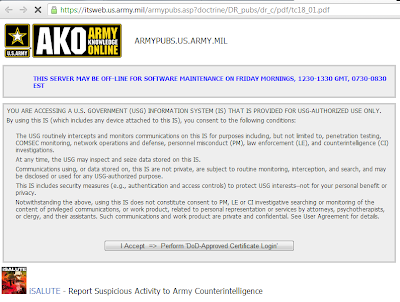 TC 18-01 SPECIAL FORCES UNCONVENTIONAL WARFARE” is listed on the US Army’s official website and can only be accessed by authorized officials within the American government (a leaked copy has been made available and can be viewed by clicking here. [1]

The document is significant because it provides a step-by-step definition of Washington’s “irregular warfare” and unconventional warfare tactics.

The manual illustrates the sheer impunity with which the United States conducts its foreign policy, aimed at illegally interfering into the political affairs of foreign nations with an aim to destabilize and reorder them to further American economic interests; Dr. Christof Lehmann describes the manual as:


“…a step by step guide of how to create, manipulate, co-opt and make use of a countries population, persons of special interest inside the country as well as expatriates, organizations inside as well as outside the country, towards a subversion. Beginning with manipulating dissent into demonstrations, the polarization of a population, riots and armed insurgencies that require action by security forces, and psychological warfare by means of media, step by step, in logical sequence, towards a full scale war, based on humanitarian principles and the pretext of bringing democracy and freedom.” [2]

The targets of the above mentioned irregular warfare operations are those states that have been unwilling to align themselves with American diplomatic and economic interests or semi-compliant states that are strategically located and abundant in natural resources.

The manual describes meticulously orchestrated covert operations that are conducted in phases; beginning with psychologically influencing the target population through foreign-funded dissident news media organizations. Subsequently, targeted nations are infiltrated to provide training and equipment to dissident groups, until a political transition is imposed, by force if necessary.

The manual is classified “Restricted” with a “Destruction Notice“, and for obvious reasons – its pages lay bare the illegal and brutal nature of US foreign policy by means of supporting insurgent groups that would otherwise be called “terrorist organizations” (emphasis added):


“DISTRIBUTION RESTRICTION: Distribution authorized to U.S. Government agencies and their contractors only to protect technical or operational information from automatic dissemination under the International Exchange Program or by other means. This determination was made on 1 August 2010. Other requests for this document must be referred to Commander, United States Army John F. Kennedy Special Warfare Center and School, ATTN: AOJK-DTD-SF, 2175 Reilly Road, Stop A, Fort Bragg, NC 28310-5000.

DESTRUCTION NOTICE: Destroy by any method that will prevent disclosure of contents or reconstruction of the document.

FOREIGN DISCLOSURE RESTRICTION (FD 6): This publication has been reviewed by the product developers in coordination with the United States Army John F. Kennedy Special Warfare Center and School foreign disclosure authority. This product is releasable to students from foreign countries on a case-by-case basis only.

The Commander, United States Special Operations Command (USSOCOM), defines [Unconventional Warfare] UW as activities conducted to enable a resistance movement or insurgency to coerce, disrupt, or overthrow a government; or occupying power by operating through or with an underground, auxiliary, and guerrilla force in a denied area. The intent of U.S. [Unconventional Warfare] UW efforts is to exploit a hostile power’s political, military, economic, and psychological vulnerabilities by developing and sustaining resistance forces to accomplish U.S. strategic objectives. For the foreseeable future, U.S. forces will predominantly engage in irregular warfare (IW) operations.

The ongoing conflict in Syria and the unrest that overthrew Muammar Gaddafi in Libya in 2011 are examples of the model proposed by this document being successfully utilized.

In both countries, American organizations such as the National Endowment for Democracy and others both financially and rhetorically supported political opposition and activist groups. When protests in those countries gained momentum, reports of violence surfaced, often in the form of sniper fire, targeting both security personnel and civilians.

In Libya, rebel groups were armed by Western nations despite confirmed reports of jihadist and extremist groups being the central component of the armed resistance. As a result, these armed militants did indeed topple the Libyan government, and have since been involved in; racially motivated mass killings and the recent murder of US Ambassador Chris Stevens and four other American personnel in Benghazi. [3]

The same tactics have been used in Syria, where jihadist groups have received weapons from US allies such as Saudi Arabia and Qatar, and have reportedly used terrorist tactics such as bomb making and extrajudicial assassinations. [4 [5]

The “Phases of Unconventional Warfare” are described in the manual and exactly match the US protocol undertaken in both Libya and Syria:

Malaysia is not Syria or Libya; the social and political systems of these countries and their resistance movements are highly dissimilar and only so much can be taken from comparisons of this nature.

Even so, it is essentially confirmed that the agitation Malaysia has experienced is not intended to promote a genuine democratic framework; its purpose is the gradual installation of a national government that is friendly to American interests by coaxing social unrest and shaping popular sentiment.

Just as described in Phase 1, “external sponsors conduct psychological preparation to unify population against established government,” it can be gathered that this first step has already been attempted. 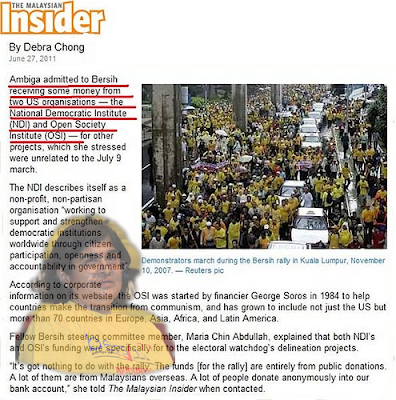 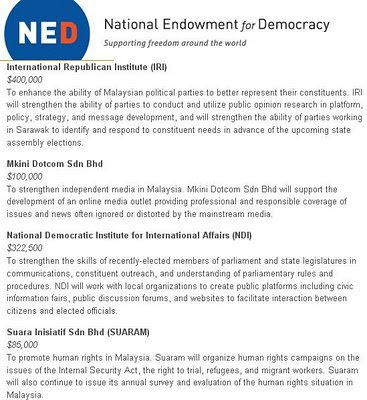 Knowingly, or unknowingly, these organizations have received financial support from the US Embassy due to the controversial political discourse they espouse. Of course, the expression of dissent should never be denied, and although the Najib Razak administration has begun to move away from Mahathir’s administrative model by relaxing controls on expression, many still feel more can be done.

If the United States is pursuing the kind of policy described in the Unconventional Warfare manual, one can understand how foreign-funded rights advocacy groups may be perceived as threatening to Malaysian authorities, regardless of the politics and values they preach.

Ostensibly, Malaysian authorities are concerned about the violence and insurrectionary behavior that have accompanied foreign-funded political movements in other countries once momentum built around them. Malaysia would not likely fall victim to an insurgency campaign anywhere near the scale seen in Syria.

However, it would be unwise to dismiss the possibility of seeing the kind of violence that took shape in Thailand during the political unrest of 2010 if foreign elements continue to pursue “irregular warfare.” The possibility of political instability coming to fruition during the general election period may factor into explaining why the current government has not yet declared them.

The International Republican Institute (IRI) is chaired by US Senator John McCain, an ardent supporter of American and Israeli militarism, and annually receives $802,122 (RM 2,544,670) from the NED for its Malaysian projects.


“They have a clear destabilizing tactic; they are carefully conditioning the public to hear some ‘breaking’ news of election fraud. The media will have a field day taping the ensuing clashes between pro-Kremlin and nationalist youth being dispersed by special police. This kind of footage would dilute any remaining trust in Russian elections.” [7]

To dilute any remaining trust – that is the principle objective when one attempts to “conduct psychological preparation to unify population against established government.”

Elections are seen as an opportunity to challenge the legitimacy of a political candidate or party, primarily by accusing the electoral system of being unfree or somehow outside of international norms.

In the Malaysian context, ruling authorities have acknowledged that more could be done to reduce voting irregularities and have begun to work toward such ends. 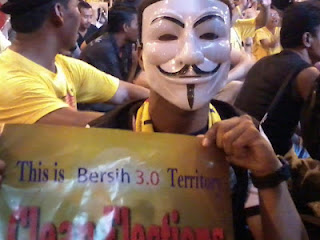 To accuse Malaysia’s electoral system of being illegitimate is a cinematic exaggeration, a myth pushed by foul Western endowments and foundations. Intelligent discontent is the mainspring of civilization, it is irrefutably valuable and channeling it comes with individual responsibilities.

When foreign governments attempt to harness other people’s dissent for their own objectives, it is the greatest attack on dissent itself.

Nile Bowie is a Kuala Lumpur-based American writer and photographer for the Centre for Research on Globalization in Montreal, Canada. He explores issues of terrorism, economics and geopolitics.
at 12/04/2012 02:30:00 PM

Rather interestingly, quarters which claim to be anti-imperialist yet are willing to accept funds from these U.S. imperialist agencies.

Wow the UMNO is probably formed by a group of morons. With that "little money" from foreigners, UMNO cannot even counter attack effectively. UMNO got lots more money at least RM40 million from Musa to starts off.

But even if the allegation is true. It is worth accepting the money from foreigners. UMNO had been robbing the rakyat for too long especially the Malay in the name of defending Malay. The Malay is the greatest sufferers from the UMNO ruling for last 55 years. The corruption and cronyism by UMNO is making the country less competitive and degrading the rakyat's quality of life. UMNO must go, it is a sin against God and your conscience to vote for UMNO again.

i think only a moron of the most stupidest preportion cannot understand that icac has cleared musa aman long before it was made an issue by theopposition.

these idiots prefer to believe the wayang of rafizi trumpetblower cows.

great that they finally admit that they are traitors willing to invite foreign power to recolonise the country.

"But even if the allegation is true. It is worth accepting the money from foreigners. "

" The corruption and cronyism by UMNO is making the country less competitive and degrading the rakyat's quality of life."

Have you even lived in the 80s? We are competitive now, GDP rising, growth is tops, 3rd largest IPO, not being a slave to IMF like Anwar wanted.