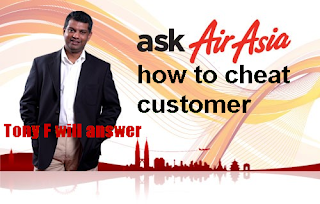 The Melbourne Federal Court confirm what we have been saying all along.

Not only Air Asia cheated the Malaysian taxpayers by robbing the routes of the national airlines, they cheated their customers with false advertising, sub-standard service, inconsiderate inconveniences, miserly cost cutting, refusal to adhere to schedule, etc.

It's okay for some customers because they like to feel they are getting a bargain when in fact, they are also cheated by the surcharges and end up being more expensive.

Read the Bernama report which may not find it's way into The Star because Tan Sri Tony Fernandez is a member of it's Board of Directors, below:

MELBOURNE (Dec 18, 2012): AirAsia Bhd has been slapped with a hefty fine for not including taxes and other charges on its website.

The budget airline was fined A$200,000 in the Melbourne Federal Court today for contravening the single pricing provision of the Australian Consumer Law, said the Australian Associated Press (AAP).

The Australian Competition and Consumer Commission (ACCC) said the case followed a 10-month period during which the www.airasia.com website did not display some airfare prices inclusive of all taxes, duties, fees and other mandatory charges “in a prominent way and as a single figure”.

Justice Tracey said unless the full price is prominently displayed the consumer may well be attracted to a transaction which he or she would not otherwise have found to be appealing and grudgingly pay the additional imposts rather than go to the trouble of withdrawing from the transaction and looking elsewhere.

He said the company would also obtain an advantage over competitors who are compliant. He accepted a court undertaking from AirAsia restraining it from engaging in similar conduct for three years.

“This ACCC action vindicates the importance of all inclusive pricing.

In case, you miss this piece of news that came out last month on Novermber 23rd, 2012 in The Sun and now no more available on their website, we reproduce it below:

PETALING JAYA (Nov 23, 2012): AirAsia Bhd has been granted with an air operator's certificate (AOC) by the Department of Civil Aviation (DCA) to fly for another five months -- instead of a two-year period -- for not meeting regulatory standards, said sources.

The current AOC is valid until April 2013.

Sources told SunBiz that AirAsia had only obtained a six-month AOC -- an approval granted from the DCA to an aircraft operator to allow it to use aircraft for commercial purposes -- after periodical audit findings by DCA showed shortcomings in AirAsia's flight operations procedures and practices including flawed communications between flight operations and pilots, an outdated manual and flight operations not in keeping with the manual.

The six-month period allows for AirAsia to work with the DCA to bring its flight operations procedures and practices up to mark.

It is also understood that AirAsia's head for flight operations has been changed due to the action.

Three key posts in an airline are nominated with the approval of the DCA, namely the head for flight operations, engineering maintenance system and crew training.

"The fact that they have not grounded AirAsia aircraft shows that it's not a serious safety issue, but this action still serves as a warning," one source told SunBiz.

Scheduled commercial airlines based in Malaysia are awarded two-year renewals of AOC by DCA.


In other markets, depending on the track record of the airline, AOCs can be valid for up to five years before a renewal is due.

While the audit is a biennial affair, the DCA conducts inspections on airlines at least once a year.

According to another source, a two-year renewal is given if airlines meet standards set by the regulator. Otherwise they are given a period of time, depending on the issue, to comply before a renewal of AOC is given, or it is revoked entirely.

In the event of a withdrawal of an AOC, the airline can work to meet standards set and re-apply for an AOC which will have to be approved by the Cabinet.

AirAsia and DCA officials did not respond to questions sent via e-mail, as at press time.

An industry observer said it is unlikely that AirAsia will let the situation progress to an outright withdrawal of AirAsia's AOC, ultimately grounding its flights.

"They (AirAsia) will definitely address whatever issues DCA have and make sure they bring in the right people and fire the wrong people, because too much is at stake."

He added that while the action taken by DCA is unlikely to have any financial impact on AirAsia as a company, it may impact its reputation as an airline and its ability to secure the best deals for financing in the future.


Do you feel safe?

Maybe some still feel so because conveniently, Tony F had The Malaysian Insider and AFP helped Tony F with their version of the news by citing some ill-intention by DCA. [Read TMI here.]

It is nothing they claimed. Perhaps in Air Asia's business model, safety is not of real concern and aviation industry is too overzealous with rules on big vehicles floating on air without any pillars underneath.

But yet the public entertained opposition's Nurul Izzah and Rafizi nonsense in making an issue using trumped fact and stories on DCA's radar system.


Hehehe ... now didn't we tell you all this while. Admit it!

But noooo ... these supporters of Air Asia will continue to defend them as a good airline, well managed and efficient despite it is now legally confirmed as a cheat.

They will still like to believe every lies and publicity stunts that Tony F shove down their throat. To argue their case, they will highlight all the shortfalls of MAS. Off course, they will believed every lies expressed by every conniving parties that ripped it off but blame it on others.

It is okay. No need to spew your anger with those repetitious arguments in our comment box because suckers are born everyday. 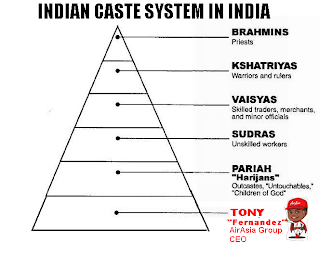 If you suckers continue to be apologetic, then Air Asia and every other service organisations will continue to suck you dry with their sub-standard services.

Rather than argue, utilise those grams of matter in-between your ears so that you are not cheated. At least, have the guts to speak up and show your collective power as consumers to stand up against their crap.

Even low caste carrier have a minimum standard of ethic and service that should be adhered to not cheat it's customers and put their life at risk. However, it can't be this low though ...
at 12/19/2012 09:00:00 AM

The second good news I had today. You should widget the cheat report permanently at your site. Tak payah, as you say, ulang lagi.

I wonder when will the ministry of consumers affair of Malaysia will start to take action against Air Asia. Try change your flight schedule, you will be forfeited of a lot of items you had paid earlier, made to pay them again. These are your seat booking fees, flight insurance, service charges etc. It is day light robbery, only you cant do much about it. When will the ministry come to our aid!

Tony F and Air Asia remind us of the notorious KL mini bus and their operators.

Yet people still ride due to its only cheap option available.

Since Air Asia is in the business of cheating people of their money and life, why bother of this orang putih.

Better go for 3rd world asian country where it is easier to cheat, corrupt and plunder.

Ismail Sabree should open up a tribunal pengguna counter at KLIA 2 -next to Air Asia office.

Do Tony F dare to kutuk the Mat Saleh Judge on this case.

Remember when UK and Europe start charging pollution tax on all airlines, he just keep silence and quietly pull out his air asia x from UK and Paris.

of course they cheat because otherwise how come they can give such low prices.is time for your poor asian to use the boats again and leave flying to who can afford it.

Anyone seen the VCD on MAS air steward sex exploits?

As far as sex is concerned, MAS is definitely at the top.

MAS is sucking the Govt monies (everyone's monies) which is more painful then pinching pennies from everyone flying Air Asia.

Go eat your heart out.

Hi, I'm a frequent flyer of AirAsia. If you check on MAS's online booking, MAS did the same thing as AirAsia did years ago.

Finally...people are seeing Tony F is a bloody SCAMMER (got my money cheated off from one of his service line and never dare to reply back) !!! Like a Chinese saying :
"Paper is never meant to curb fire!"

If AirAsia is pariah, then our Government civil servants even more so. Those who do their job half heartedly on tax payers money are Pengkhianat negara. So what do we do? Lynch them? We also close one eye la. Sebab they're untouchable.

Same as Tony. Tony is powerful. Tony got friends. So how? Just the way it is la. Why nobody dare to touch him? Come on Voice. For a crook, I wonder why he got Tan Sri. What message is being sent out here? I don't want to say more. Nanti pulak kena tuduh saya ni penderhaka.

Yes, I was once shouted at (tengking) by an Indian stewardess at Kota Kinabalu. I was just about to send sms - we were just boarded the plane and the plane was still idle - and this very arrogant Indian steardess shouted at me "if you want to use the phone, GET OUT OF THIS PLANE!"

Now I dont fl AirAsia anymore since there are other much better airlines that go to Kota Kinabalu from KLIA.

Bye bye AirAsia for being very very rude to your valuable customers...