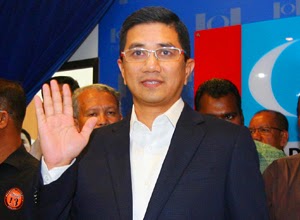 Leaving the last Part 2 for two days allowed for further development on the PKNS issue.

Tan Sri Khalid Ibrahim continued with his cost saving bullshit to say he is tightening PKNS control. He already tightened control when PKNS was under a barrage of attack prior to GE13. Any blame of losing control is no more just Othman but more him.

They will be listening to PKNS staff and not PKNS Holdings staff side of the story. Expected issues raised would be duplication of work, high pay but outsource work, and suspicions of cronyism.

However they should hear from the former PKNS Holding staff of PKNS staff's own sordid stories too.

Khalid tightened control on the PKNS GM, when then Encik Othman Omar was getting too close to his rival Azmin Ali. He was in same age group and good looking handsome men tend to flock together. 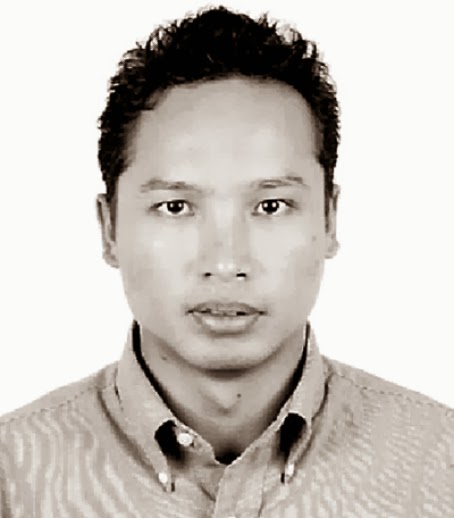 Khalid only realised too late that Osman had taken in Azmin's speech writer, Nurul Muaz Omar as PR Manager.

Maybe there are few other Azmin's boys but Othman insist to take in professionals to make his job easier, deliverable met and if KPI met, hope to renew contract.

The existing PKNS staff just do not cut it to do purely development work. And more so for high end and high quality development.

Othman took in his former team from his previous projects, and an ANSARA by the name of Azlan Jamil as Senior Corporate Manager. He gets a fat RM23,000 a month salary but PKNS staff see his job function is not clear and specific.

They claim to want to be a top developer and no more do social welfare work but  spent such money on football. Yet claimed RM7 million paid to PKNS Holding contract staff was excessive.[Read Edge here.]

In Part 1, we wrote of Rina Sharif being approached for advise on how to sack Muaz but was told it cannot be done. Now she ended up being sacked en-bloc. 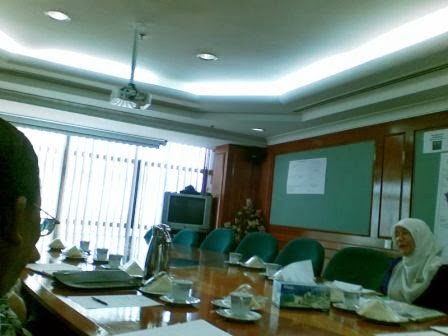 We also wrote about two PKNS staff by the name of Siti Zubaidah and Roslan meeting Faekah Husin, Khalid's feisty PA. They suggested to her to sack all staff of PKNS Holdings. Are they concerned about PKNS?

Not much is heard of ex Auditor, Roslan Mohamed but lots is heard of the Kontroller Northern Region based in Shah Alam, Siti Zubaidah Abu Bakar. Ever wonder why the need to have regional offices complete with Accountant, Managers, Engineers and staff when it is all in one state of Selangor?

Siti Zubaidah was investigated by MACC for having an ATM belonging to a contractor. Money is not transferred to her but only withdrawing an ATM. Smart ... difficult for MACC to prove but why Khalid and Othman kept quiet without any in-house disciplinary action?

Covering up for a staff from the presumably corrupt BN Government? Off course not, they would have went for her. In their second term, blaming BN is no more legitimate. So why no action on corruption? 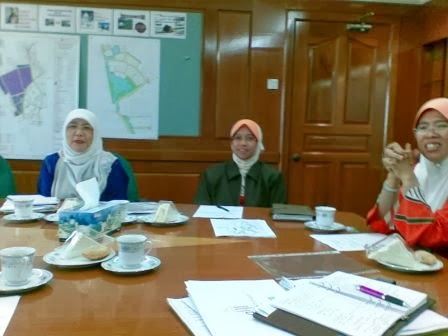 She aspired and has taken over Chairmanship of PKNS FC and eyeing Financial Controller post. Obviously sincere, isn't she?

Siti Zubaidah was the person that Faekah Husin believed and took her advise to sack all PKNS Holding staff. 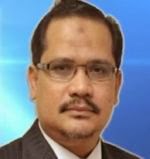 The new General Manager for PKNS, Azlan Alfiah had no plans to sack the 23 or 19, depending on who reports. Azlan was the CFO of Kumpulan Darul Ehsan Berhad and worked under Raja Idris Kamaruddin. Name familiar?

During the week before the long weekend of February 1st, there was a ceremony to sign and cite the pledge of integrity by all management and staff of PKNS and PKNS Holdings.

Why would they want to do that if Azlan Alfiah had planned to sack all of them lock stock and barrel? Maybe it is to give a false impression but that is in politics.

In corporate life, they do not waste time to do the unnecessary. On top of that, Azlan had been in communicado with several key people to know PKNS's financial and project status. He even had planned and told few of his plan to promote some.

The sacking is neither planned by Azlan Alfiah nor Othman, but planned by Faekah. Upon the advise of Faekah, Khalid called up Azlan over the long weekend to instruct him of the plan to sack all.

He must have returned back to KDEB to prepare the letters and got some staff fro KDEB or Kumpulan Peransang to prepare the documents. When he came in on his first day on the job on February 3rd, the sacking letters were finalised.

It was signed by Datin Paduka Azlina Zakaria, the Chairman of PKNS Holding and Financial Controller of PKNS and delivered to the sacked staff and management on February 4th.

Azlina is another interesting character. She is dubbed "Mak Tiri" of PKNS for her role as hatchet woman. Heartless and no racial bias. concern. She whacks everyone; JV partners, chinese taukeh, Malay sub-contractor, and staff.

Tan Sri Kadir Sheikh Fadzir, who joined PKR to save his JV projects with PKNS, yelled her, "Apa punya Melayu??!!".

She was seconded from Worldwide Holdings and had returned back. Now the corrupt Siti Zubaidah is salivating for that job and seeing PKNS as goldmine for her family fortune. 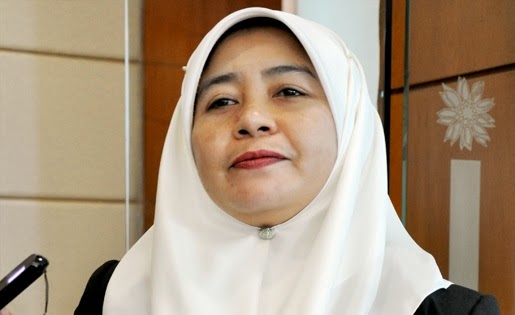 Faekah was instrumental also in alerting Khalid that Othman is closed to Azmin. It was her deft touch to get Khalid to use Othman for one last time before he ends his contract on January 31st. The ploy to transfer Othman to State Secretary Office was bullshit. He was on his way out.

After what happened and many controversies, Othman was never going to get renewed. It will be written later. Before he leaves, Khalid used Othman to hit on his own friend, Azmin. Those in the PNB of old knows how ruthless Khalid could be.

Our friend, who left Guthrie with bad blood with Khalid, realised it does not end there. Wherever he goes for interview, Khalid's words reached earlier to block his rice bowl.

At one time, Tan Sri Abdul Rashid Hussein made him wait for 6 hours for an interview before cancelling and not rescheduled. Rashid moved to Anwar and that was a fatal move. Rashid and Khalid went back a long way.

Back to Faekah, such is her willingness for Khalid. Their partnership together is see as both Bonnie and Clyde and Ventriloquists with their puppet.

Khalid has a speaking disability. He stutters and gets mocked as Khalid Gagap on the Internet. So Khalid will only give official-like comments but leave to Faekah to say more than that. He may have given her the greenlight to quarel and take on any of his detractors, even Azmin. He doesn't say so officially but he does not stop or complain of Faekah actions.

Her position is merely as Personal Assistant but she seemed to be making decisions for Khalid. If the British are still around, she would be the British Resident that offer advise which the Sultan must accept and Menteri Besar just execute.

The British have long gone and Anwar has aspiration to overturn the Constitutional Monarchy. He would have preferred calling Faekah as Governor.

It is the talk among the 23 sacked PKNS Holding staff that Anwar described Faekah as Selangor Governor in his meeting with some of the sacked staff. However, he tried to qualify by saying Faekah was close to the family then but not any more.

Despite his bitching of Faekah, Anwar did not step in to help the sacked staff and still left it to Khalid.

The comment was interesting. It is puzzling as to why he would want to bad mouthed someone insignificant in both party and PKR government hierarchy like Faekah?

Is he trying to absolve himself from being seen as working with Faekah and Khalid?

Anwar did not say to them that Faekah worked under PKR President and Anwar's "first" wife, Datin Seri Dr Wan Azizah.

She was seconded to Khalid and remained in contact with Wan Azizah. Wan Azizah-Khalid-Nurul attempted to block Azmin's advancement by pitting Dato Zaid Ibrahim against Azmin in the PKR party election.

It was strange because Azmin is but a spoilt loyalist of Anwar. In the end, Zaid lost but Wan Azizah remain President and Nurul became Vice President. All the quarrel but in the end, the Keluarga 69 still control PKR. 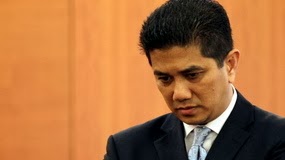 Remember in Part 1, we wrote that Azmin did not know about the Kajang Move but Rafizi, Khalid and Faekah knows. You could guess from who Faekah and Khalid got to know.

Why did Rafizi knows but Azmin was not told?

For one, it is to solve the Khalid-Azmin public spat. Second is about Anwar's premiership plan. However, there is the suspicion is that Azmin is beginning to be a pain in the butt with his demanding ways.

Political writer, Yahya Ismail is detracting Azmin with comments that Azmin was bleeding from his arse whenever Anwar visited him as student in the US.

We heard a different version of the bleeding arse story. Nevertheless, he is making PKR bleed slowly but surely in their arse.

It cost PKR in Sabah. It destabilise Selangor administration. Anwar wanted to be PM but now he has to settle for second best as MB of Selangor. This is to name a few.

Some of Azmin so-called supporters are beginning to get pissed with him. Recently AMK leaders were snubbed for supporting Anwar's plan to takeover MB of Selangor position.

Our reading is Anwar and PKR generally is losing patience with Azmin and his feet stomping demanding ways. He is supposed to be his loyalist and not have an aspiration himself.

Lately Azmin has confided of seeing himself as future PM too. Anwar will not make it due to old age but he see himself making it.

Anwar with Khalid and Faekah via Wan Azizah together with other leaders, thought to be Azmin's staunch supporters but losing confidence with Azmin, could be hatching a plan to knock Azmin off.

Wan Azizah have been quiet, Nurul is quiet because of the divorce, and Saifuddin Nasution is quiet too. Still water does not mean there is no crocodile in the Sarawak river.

Although it is widely believed that Wan Azizah will be passing the Presidency to Anwar, they could be hatching something as one for the road to their mortal enemy.

Hell hath no fury like a woman scorned. The Islamic empire fell to pieces because of the woman's vengence.

What is heard is that they will weaken Azmin by pitting Saifuddin against Azmin for Deputy President post in the upcoming PKR party election. In PKR, Saifuddin carries more weight and respect than Zaid Ibrahim.

Azmin disobeyed and broken his mother's heart. Muslims believe Allah will punish an anak derhaka in this mortal world. Could it be it is time for Azmin to face the divine retribution by seeing his political ambition stunted?

There is more sordid stories on PKNS and PKNS Holdings staff and management. It will prove that Khalid and PKR is not as great as the public think they are. All rhetorics.

Just as bad as BN and if not, worse by their open public spat and at times immature behaviour. Maybe will continue. Jeng jeng jeng ....