Either Nazir apologise to Arul or ... 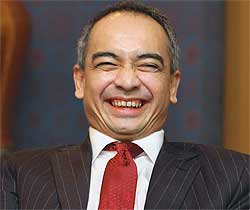 ... he is just another childish and selfish Mr Bean look-a-like.

Rocky Bru wrote that he does not expect Nazir to be put under inquiry for his "bastardly" erroneous Instagram message as what happened to Badlisyah Ghani, the former CEO of CIMB Islamic for highlighting inconsistencies in an exposure by Wall Street Journal.

Rocky suggested that the least he should do is to apologise to Arul Kanda.

That is if he is a truly gentleman with aristocratic upbringing. Someone so spoilt as a youngest child and with a big ego will never apologise.

As far as Nazir emulating Badlisyah to resign, we have been saying so for quite sometime. Nazir made a wrong call in Indonesia that cost the bank. Instead of quiting, he promoted himself and left behind shit for Tengku Zafrul to clean. [read past posting here].

So do not get upset for this name calling. It is justified.

Badlisyah was told to remove his FB posting on reason he should not be committing on a technical matter. As bank CEO, he has some familiarity with remittance instructions. It is something he can commit. Instead of going through the inquiry, Badlisyah had other plan and decided to quit.

Now, on what then basis should Nazir be committing on 1MDB?

He is not involved in any investigating authorities; be it police, or Bank Negara or MACC. Neither is he a member of the Attorney General office to vet through the case. He is not on the Board of Directors of 1MDB.

As a citizen, he has said enough. But instead he acting as an irritant.

Should he wish to make allegations, he should be specific, make a police or MACC report, and put up the proofs.

Should he be interested in politics, again he could resign from his corporate positions and most welcome to enter the ring or turun padang.

Otherwise, he should stop his spoilt kid tantrum for losing out on the first 30 year bond deal to Arab Malaysian or his request to be Minister of Finance refused.

Quite sure, the usual response would be to defend him and question who we are to question him. Maybe we have sufficient years of living and observing. At least, we have met and spoke with two or three of the brothers as to form an opinion.

We have been asking ourself: Can Nazir make it out there beyond the Malaysian shores?

If he is not Nazir Razak - with a brother who is PM, father a great former PM and strong aristocratic family connection from both sides of the family, can a chap, who started out as a broker hawking family connection to make all those government linked deals, made it to where he is today?

Otherwise, he is just a penghulu son with the advantage to be a juara kampong. No where compared to the Indian boy from Machang Kelantan that slug his way up.

AK the lad fron Machang Kelantan who grew up in Taman Raja Shariman Sitiawan and later moved to RMC Sungai Buloh and then LSE the grand defender of Dato Seri Najib and the attacker of the architect of Ketuanan Melayu.
There is so much to admire how that man controls all the right wing types... Even you and Big Dog and Rocky.. really classic.

now why pick on Nazirs post as being a personal attack on Kekanda Arul. Arul did not undertake any of those moronic transactions it was undertaken by his predecessor. Arul is just providing cover..
strange you see this as a personal battle between Nazirs and Arul?

Anonymous said...
This comment has been removed by a blog administrator.
7:41 PM

You can be a classic yourself. You said we are right wingers under control of AK the defender of Najib. AK too is the attacker of ketuanan Melayu.

For raising that which side are you with now, for or against ketuanan melayu, khairy anney?

Don't get into a DAP-esque style of argument that seek for the absolute consistency and zero possibility of hypocrasy. We are clear and consistent in our position. Why should we answer to anyone or giveaway everything we know.

Anway .. just forget about it. If you really need to defend that spoilt brat, save your energy for the next posting.

Touché...
On second thoughts and after good nites rest, I do agree with the thrust of your message. kind of silly of me to stand in the way of your post which for all means and purposes is factually correct.

Btw, I will be ceasing from further comment on 1MDB and will be focusing instead on thethe Seventh Sister.

Whack Nazir.. yes sir by all means.
Btw .. I will be refraining from further comment on 1MDB and Kekanda Arul..

Anonymous said...
This comment has been removed by a blog administrator.
9:57 AM

You say you are consistent , no , not any more , you are balanced in your writing 7-8 years ago , not taking sides but on merit of the situations . Now you are akin to a mercenary blogger , but none the less , the quality of your writing is getting lot better .

Thanks for your observation. Sure hope you be more specific. Easier to explain.

Deep inside we feel no different. We even dare take a major departing stances, plural. Maybe that is not in sync with you thus the mercenary observation. Maybe not.

We have not diverted from siddeq amanah tabligh fatanah. Amar makruf nahi mungkar. Its just we are not as reckless as before and more measured. Wiser with age perhaps?

Do follow our issue on Datok Keramat land. Is that what you meant?