Passport fiasco: Who to blame? 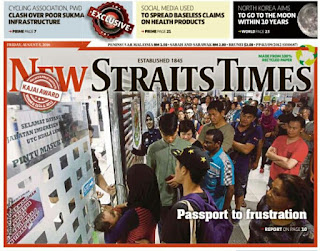 It is not true that NST, Berita Harian and Utusan Malaysia blacked out news on the passport issuance fiasco at Immigration. So for the moment, it rules out any blame on anyone linked to these few mainstream media.

In the meantime, the public are already laying blame to the current and previous Home Minister. However, before pursuing a favourite Malaysian pastime to assume and presume blame or "gullible"  behaviour to ignore facts and pass judgement, read an account of this fiasco at Rocky Bru here.

So let's start by seeking information on the Malaysian passport. One can read in Wikipedia here so only relevant information is highlighted.

Processing of Malaysian passport applications and renewals is very rapid, with new passports usually issued one hour after payment for normal cases.[1]

The introduction of passport renewal kiosks (KiPPas) at Immigration Department branches across the country allow passport applicants to apply and pay for their passports without queuing at the passport application counters.[2]

So why does it takes days of queuing from the wee hours of the morning just to get into the wait list for the day?

More so with a biometric passport system in place. Wikipedia wrote:


Malaysia was the first country in the world to issue biometric passports in March 1998, after a local company, IRIS Corporation, developed the technology.[3] In December 2002, thumbprint data was added to the biometric data on the passport chip. Similar technology is used in the Malaysian identity card, MyKad.

There is more on the technological development in Wikipedia. But the question is: should Iris be blamed?

On March 2014, Bloomberg made a  rather damaging report on Iris:


Biometric Passports Born in Malaysia No Cure for Human Error

The electronic travel documents are embedded with a chip storing the holder’s personal information: a facial photograph, height, weight and sometimes fingerprints and scans of their iris. The information on the e-passports, first developed by Kuala Lumpur-based Iris Corp., can be verified with a government database during checks at immigration control points.

It could be the case of orang putih being jealous of Malaysians ability to develop a technology before they do but there were cases in the past of lapses in security at the Malaysian airport that saw foreigners able to sneek into the country.

Whether it was at the time Iris technology was used or not, it does not matter but it highlights human error or negligence remains relevant. 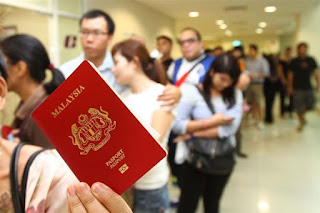 Iris was given the contract to supply after developing the technology. However, in early 2015, Iris contract was up for renewal and there was a tussle for it. Focus Malaysia reported:

Datasonic Group Bhd and Iris Corporation Bhd are battling it out for a new lucrative government contract estimated to be worth hundreds of millions to supply Malaysian electronic passports. Currently, Iris holds this e-passport contract and it is learnt that Datasonic might just succeed in wresting it from Iris as the contract is believed to expire in June.

According to sources, while the e-passport contract will only expire in June, Iris has already fulfilled the supply and implementation of secure chip technology solutions under the contract period.

It would not be a surprise that the lobby for the contract would have raised the issue in the Bloomberg report and lay various other complains on Iris's system. By December, The Star reported the following:

KUALA LUMPUR: Datasonic Group Bhd has clinched a RM318.75mil contract from the Government for the supply of Malaysian passport chips.

In a filing with Bursa Malaysia, Datasonic said its wholly owned subsidiary, Datasonic Technologies Sdn Bhd (DTSB), had accepted the letter of award (LOA) from the Home Affairs Ministry for the supply of passport chips.

That takes off Iris off the blame for the current fiasco. The supplier for the Malaysian passport chip today is Datasonic. They are supposed to be able to supply 12.5 million chips but why only 500 a day?

Iris can claim that when they were the one supplying the chips, there was no problem and within an hour passport are issued.

Not only that, The Star reported some months ago:

In a filing with Bursa Malaysia, the secure ID and chip-based card provider said its wholly owned subsidiary, Datasonic Technologies Sdn Bhd (DTSB), had accepted the letter of award (LOA), under which it is required to furnish a performance bond for RM2.23mil valid throughout the five years.

So the question is why Datasonic could not fulfill their obligation?

If they are not capable to do so, then the blame should go to Ministry of Finance. They are the one to decide and award contracts.

However, it is not so simple. Ministers merely chair the Tender Board meeting to decide but the decision is a collective one.

Thought the process was discussed long time ago in these two postings in 2013 here. Malaysian may have missed those postings or they never realised there exist a Malaysian blog named ABITW.

By the way, as update, the system was supposed to be delivered by December 2015 but it did not happen. After given extension, it still could not be delivered and surprisingly given another 14 months extension. Hello MOF! Calling calling MACC ...

As far as the Datasonic problem, concerned parties including MACC should come in. Was any politicians or government servants involved in a hanky panky that "encouraged" them to missed out on some legal or technical issue that result in the current fiasco?

After all, it was Iris that developed the technology.

This blog will not speculate because the last time questions were asked here based on publicly available information relating to a proposed fuelcard contract involving Datasonic, TV3 carried news of Datasonic plans to sue The Malaysian Insider and this blog.

Lucky thing, there was no contract awarded to anyone so there was no basis to claim TMI and ABITW caused denial of contracts to them. Otherwise, writers of this blog will be exposed.

Nevertheless, this passport fiasco has already reached crisis proportion. There must be a sense of urgency in addressing this problem. It is impossible to claim there is no solution. More so, it could cause further erosion of votes to BN among the urban middle class.

Najib should step in. If Iris or/and Datasonic or/and any other parties was/were responsible for this fiasco, they or their agents or proxies should be blacklisted from further government contracts. They have been a public nuisance!

Let me tell you something.

For the last 13 years my job scope is to travel within Asia pacific. This means every week im in and out of KLIA.

And every week, for the last 13 years, the constant observation i can make at the immigration point is that the machines are always problematic.

In the first few years, ok acceptable to have execution issues.

But up till today? Unacceptable.

So who is to blame ?

Now add that to that now current passport fiasco. Im lucky i got my passport replacement a day before Immigration department decided to switch the system.

Maybe someone is trying to send a 'message' to Najib.

"You should have not transferred me from the MACC to Head Immigration".

Me thinks; Now both these 2 Government agencies are in shambles and cannot be relied upon (tak boleh diharap) by the Rakyat.

Yes I agree. 'Najib should step-in'. Give petty jobs like, selecting clothes for Cabinet members to wear during Merdeka Day, to other lower ranking officials.
You as PM and FM, have a lot of work already. Stop all those popularity seeking sting, like visiting schools and orphans or presenting Zakat handouts. It not your job, anyway.

I thought your write-up on the profile of Datasonic should be sufficient to unravel the issue. As it is the usual suspects come to mind: people who are incapable of fulfilling their technical commitments but have strong political connections are the usual winners where government contracts are concerned. Just look at all the other contractors who have not performed and you will in most propability find the answers.

The problems were brewing way before the transfer announcement. Merely coincident. At least an macc man could now apply his investigative skill to solve problems than tangkap orang.