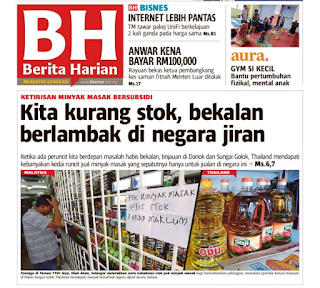 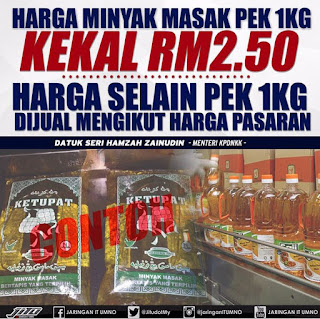 No doubt there are corrupt Ministers and politicians. If the Minister is at fault, know first what is their responsibility? What can they do? What specifically did they do?

Definitely they cannot do everything to be blamed for everything. Someone must have collaborated.

Another equally important question is: who are responsible for implementation? Who was responsible for operations? Who was supposed to do monitoring and control? And who to do enforcement of law and regulations?

If something go wrong, where did it go wrong and who was in charge and directly responsible?

Things go wrong when there had been interference on the procedures, process and authority. Someone given the burden of authority and responsibility failed. Check and balance in the system encroached upon.

Did anyone bother to find out if there had been any interference or manipulation of the SOP? 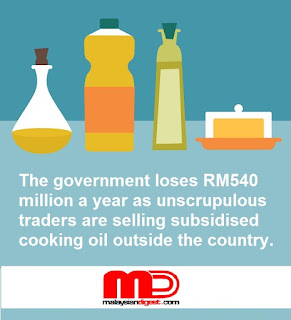 As a palm oil producing country, the benefit was shared with the people by making it cheap for consumers through government subsidy system. At one time, Malaysia survive is a low cost producer nation so subsidy on goods particularly food and fuel was necessary to keep cost of living affordable and low.

However, Malaysians being Malaysians, there will always be that someone out there taking advantage of the situation. Dave Avran wrote in What's cooking Doc? that some 45,000 metric tonne of subsidised cooking oil, over the local consumption of 40,000 metric tonne, get smuggled out of the country every month.

The subsidised cooking oil is sold at market price and that cost the country a whopping RM540 million a year. As a result, it become costly for government to bear and everyone suffer because the greed of the few.

Back in 2014, this blog pursued the issue of diesel leakage and the accompanying fuel card contract. Billions may have been lost a year and the diesel budget increased from RM10 billion for 2010 to RM25 billion for 2015.

There were syndicates of big time players that could afford to have tankers to export subsidised diesel.

The diesel was obtained through network of petrol stations. Illegal pipes can be seen jutting out near the jetties for diesel to be funneled away. Tankers can be seen queuing in the high seas ready to load and leave.

In the postings [read here, here and here], it was revealed that be it, port authorities or APMM or marine police or KPDNKK, enforcement agencies and authorities were on the take to look the other way and allow this economic sabotage on the country and people to happen. 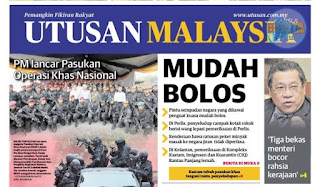 Before anyone do a blame on this blogger or twist it to some political agenda, re-look this 2015 posting here on an NST report of a Special Branch report claimed 80% of agencies involved with the border are on the take.

The biggest MACC raid of Sabah Water Department highlighted a glaring fact. Corruption cannot happen if civil servants are not involved. Though the suspicion is on KKLW and the then Minister, Dato Shafie Apdal, the first line of corruption and power abuse at the civil servants level have to be ascertained first. 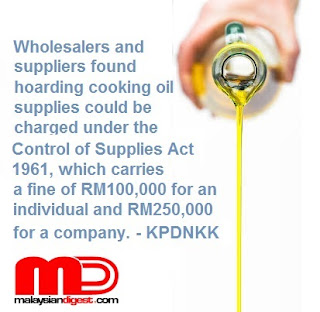 Pondering over how 45,000 metric tonne of cooking oil could be illegally smuggled yesterday [read Bigdog here], the revelation was alarming.

Cooking oil is not as lasting as diesel that can be hidden in bunkers and exported to far away places. It requires a more delicate handling than the easily pumped diesel. Unlike CPO, it cannot use large storage.

The volume of 45,000 metric tonne is a huge, to quote Donald Trump. It shows the operation is widespread and cannot go un-noticed. At 45,000 metric tonne a month, the smuggling activities must be glaring and obvious. It means authorities like KPDNKK turned a blind eye to allow it to build up over many years.

Since writing about the diesel smuggling many years ago, the last check shows the Director of Enforcement remained the same person. As the saying goes, Ministers come and go, the civil servants are here to stay.

The corrupted ones would stay on forever to pan the gold mine. The codeword used among civil servants is they found their lubuk. 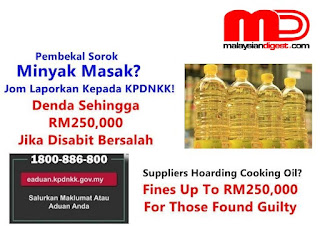 Authorities cannot claim to not know. Smuggling operations need containers, boxes, factories equipments and transportation. There is only so many palm oil refineries and the industry knows all the players. They are aware of any abnormalities in the market.

Unusual activities cannot be undetected. For instance, it was once reported that food manufacturers abused the subsidy system but has any major factory or palm oil producer charged? 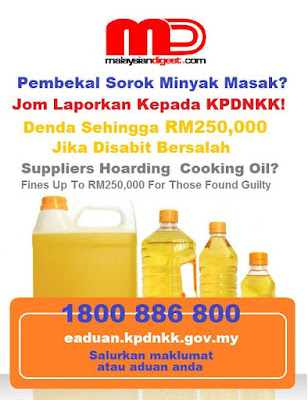 Another of equal importance: how many consumers or common Malaysians folks reported these illegal activities to the authorities? One can argue that certain authorities will not do anything about it but did they report?

Know of friends involved in food industry that when asked to share information to whistleblow on the abuse of the issuance of Approved Permit, refused to tell anything. But upon retirement, cakap banyak! Sembang saja ....

Remember that no Minister or even wife or family of Minister could get kickbacks if the civil servants do not collaborate. The Ministers have certain power but if civil servants dare to resign in protest and speak to the press to uphold integrity, Minister or politicians cannot help themselves on public fund and subsidy.

Some KSU and Directors are known to do stood up against Minister or not collaborate. Unfortunately, it is for the wrong reason and there is usually self-interest.

When Sabah Water story broke, Dr Ali Hamsa was quick to say projects more than RM500 million will require MACC and Auditor General involvement in the tender process. Why only now? Why did KSP slashed MACC's budget and their human resources sliced thin?

It is only Ali covering up the weakness of civil service. If there is a system in place and PTD Mafia of KSN and KSUs are honest and serious, there is no need for MACC and Auditor!

It is an acknowledgement that civil servants cannot be entrusted with authority and responsibility. If the public is not comfortable to authorise politicians, then under what system can there be without any person being entrusted responsibility?

For that matter, everybody - politicians, civil servants, industry players and public - should be responsible. In one way or another, everyone  closed their eye, ear and mouth to allow the abuse to happen and prolong. This is something that directly affected our daily life but all of us kept quiet about it.

Yet we scream over issues which are not understood and clear. At the same time, allow themselves to be manipulated by the corrupt and power crazy to perpetuate legacy and dynasty.

All of us will have to bear the inconvenience and additional cost. Maybe it is time to consume less oil and resort to grilled and steamed food preparation. Healthier ...
at 10/27/2016 12:35:00 PM

The govn of the day is the civil servants employer. If the employer fails to instill good values and governance, should the employees bear most of the blame? For the past several yrs, the govn has been giving special bonus, raise, etc. In the private companies, bonuses and increments are only given if the performance are satisfactory, so what mix signal is the govn giving?

The reality is both are complicit to prop each other!

I agree with this article wholeheartedly. The civil servants are not doing their job, and now even worse. They are now leaving it entirely to MACC. And every year the states bestowed them with honorary titles which they dont rightly deserve. Its downright shameful.

“Success is incorrectly gauged by many people as being dependent on how much wealth one has accumulated. So the most wealthy are looked up to as the most successful. This is the first line of Satan’s attack because once we don’t even know what success is, he hardly needs to do much more to keep us climbing up the wrong ladder. We want to earn more than we can spend, buy more than we can eat, build more than we can live in & aspire far longer than we will live! So who is considered successful?” (Mufti Ismail Menk, August 13, 2011)

Jakim instead of trying to rename every food items in this world should spend its RM 1 BILLION budget on educating the Melayu that spending that corrupt money would not get them 72 virgin in the thereafter.

But then again, with that corrupt money, they can fuck more than 72 virgins... so why wait it they die. Hahahaha.