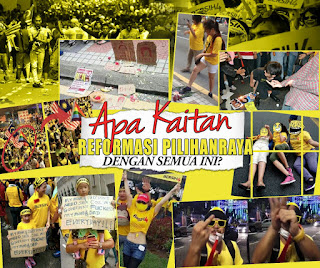 Everytime there is an election coming, they will have a Bersih demonstration. Let's not beat about the bush to claim it is peoples' voice.

At every demonstration, they will keep uttering the same demands in which have been fulfilled. There is a system in place and if any weakness, it is not systematic in nature but execution issues.

As far as election process is concerned, it is fairly tampered free. If there had been any problem, it is non-systematic in nature like people, machine or maybe natural catastrophe.

Recently a member of the opposition; namely former EC Chairman, former Vice President of Perkasa and now Vice President of PPBM, Tan Sri Rashid said the election process during Mahathir's time was fair. After many Bersih and upgrading, it must be super fair by now.

Bersih does not serve any purpose at all. It a political manouvre to start a perception momentum against the ruling government.

The synonyms for demonstrate turns up a whole list of words but most closest to described the Bersih demonstration planned for tomorrow should be exhibit, and show and tell.  The Malay word for demontration is "tunjuk perasaan" which is expression.

If that is the purpose, there is no need to do in such big numbers of turn-up. A certain numbers and some media coverage should be sufficient to get message through.

No need for massive numbers which disrupt traffics and traders like Syed Akbar who complains repeatedly of Bersih demonstration affecting his jewellery business on the most busy day of the week. Will he be consistent to oppose Bersih 5.0 this year now that Mahathir call on Malaysian to attend Bersih 5.0, while he is off to Sweden?

Some will argue that the more the numbers the louder will the message and the more urgency it will get attention. True but after sometime, it is no more the message any more. If turns out violence, what message can it get through?

The demand for Bersih 5.0 are clean elections, clean government, uphold parliamentary democracy, right to dissent and empower Sabah and Sarawak.

The reply would be: 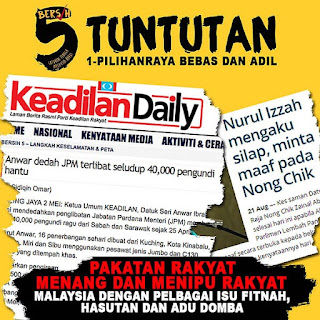 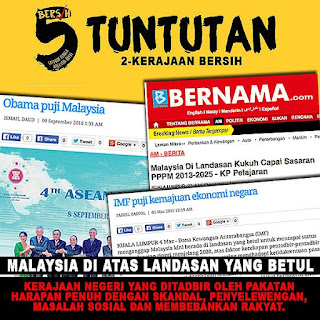 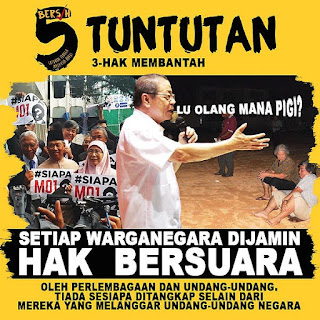 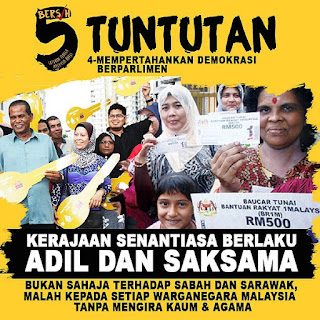 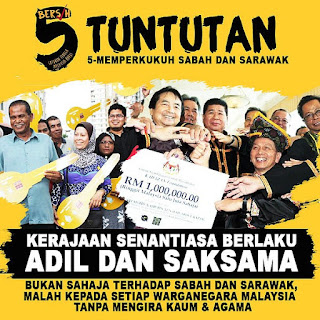 As far as the 6th demand, will Mahathir agree?

Some suspect he is off to Sweden to get political asylum. Tan Sri Pairin Kitingan announced that the RCI on illegal issuance of IC to foreigners in Sabah has completed its work and heard some of the reccommendations are severe!

UPKO has just challenged Shafie and his Warisan new political party, a Johnny-come-lately into the Sabah for Sabahan struggle to review the Malaysia Agreement 1963. to state their position on which Prime Minister, Dato Najib agreement for a review.

Their reaction to Kitingan's soon to be recommendation would be interesting.

Really, what purpose will Bersih serve? Do one get things done through such expression? The policy maker cannot do anything based on anger, hatred and noises.

A reader wrote to FMT:


The real work isn’t in the streets

Protests are a great way to dramatise a statement, but are the right people getting the message? 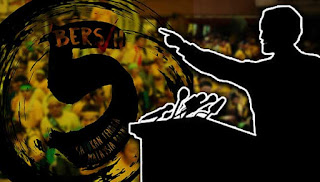 As Bersih 5 approaches, there is a fear that the protest would turn ugly. Months of agitation and outright violence from Sungai Besar Umno chief Jamal Yunos and his Red Shirts against Bersih have led us to expect a confrontation tomorrow. At the very least, emotions will run high even if the police succeed in preventing contact between the two groups.

Regardless of what may happen, there remains an essential problem which has yet to be solved. While mass demonstrations are certainly eye-catching as far as statements go, the true problem lies in the disconnect between the city and countryside, between the urban and rural votes.

The lesson we’ve learnt from the last two elections is that the high moral arguments and the accusations of corruption have not moved those whose concerns are an economy that seems ever more intent to abandon them.

A protest does not accomplish anything towards educating the masses as to why they should be concerned with corruption and international scandals involving numbers they cannot even imagine. The real work, as it has always been, lies in the toil of helping every Malaysian become cognisant of the role his vote plays in ensuring good governance. It lies in teaching voters that a vote is something that should not be sold for money, that voting is not only a right, but a responsibility that every eligible voter must exercise.

That is certainly a much harder task than gathering a group of protesters from among those already committed to the cause. One suspects the ranks of Bersih may be swelled this year by those tired and frustrated by the hooligan antics of the Red Shirts, but the additional protesters will still be from the same core of opposition supporters and civil society members.

Members of the liberal elite tend to be far presumptuous about the support given to them. That is why the voting pattern does not change. It is said that the elite fears the ignorance of the masses and the masses fear the indifference of the elite. In the wake of the Trump victory and Brexit, the truth of that statement must be something for the liberal elite to ponder as we head into yet another election with a weak, fractured opposition and an incumbent that keeps close to the down-to-earth concerns of the rural masses.

It is certainly hoped that things will be kept under control tomorrow. Violence has no place in a civilised protest, and no one wins by resorting to it.

Because that is what it is all about. To sum it, to change government has to be done through elections and to get their numbers. Dato Najib has clearly said that he will not withdraw from pressure of street protest.

He should not do so because he was constitutionally elected. He has more supporters in Parliament than the presumably the representatives of Bersih has. And we should not allow such political culture to set in.

The outcome of the Trump-Clinton elections tells us that it is not just liberal agenda that is the criteria voters consider to select leadership of the country. Yet this people keep regugitating the same old rethorics.

Don't worry your head over the matter. Everything is done according to SUNNAH.
Here's what Dr.Mazar says about BERSIH tomorow;

I agree with your statement:
"At every demonstration, they will keep uttering the same demands in which have been fulfilled. There is a system in place and if any weakness, it is not systematic in nature but execution issues."
-------------------------------------------------------------
The Bersih organizers should make an evaluation of what they have achieved so far before embarking on the 5th rally. Most items with regards free and fair elections have been addressed or of no real concern to begin with. They should acknowledge these. Also, they should condemn those who undermine the electoral process by misleading the public with allegations that the election has been rigged by use of phantom voters (as if there so many Malay looking Bangladeshis), switching votes by turning the lights out (people attending need only to turn their handphones and room will be lighted) and throwing ballot boxes into swamps (without first burning them).