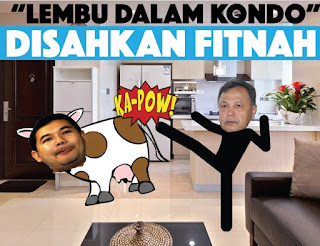 MP for Pandan and PKR Sec-Gen, Rafizi Ramli was ordered to pay RM300,000 to Salleh and his company plus cost. His BAFIA case is still on-going and does not look to be in his favour.

Within 48 hours, the unrepenting slanderor and compulsive liar was fined by a Session Court for RM1,950 for his involvement in the post-GE 13 Blackout 505 rally in 2013 and is already back to his own self with another sensational slandering.

He made an issue of Riza Aziz's presence on board of PM's official jet for his official visit to China that it was picked up by foreign press.

PM is entitled to invite any person on his official jet. More so, as Datin Rosmah's Special Officer, Dato Rizal Mansor explained, there is an official invitation from the host.

It is a non-issue and not unusual as Dato Marina Mahathir was seen with Tun Mahathir in a China official visit in 1985.

To return the nitpicking, Tun Siti Hasmah should not accompany most of Mahathir's overseas trip but to make way, he assigned her as official doctor and maybe got paid.

Considering the investment China made in Malaysia, the issue raised is petty. It is Rafizi's issue yesterday against Tabung Haji that should be looked seriously. 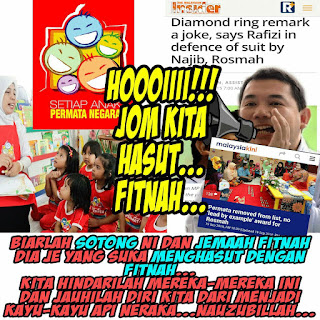 It is seditious and insidious. Someone should make a police report and investigation commenced immediately.

It was reported by Malaysiakini yesterday: 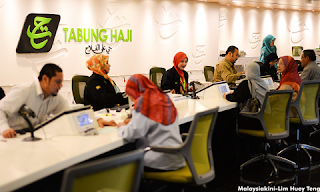 PKR vice-president Rafizi Ramli has claimed his analysis of Tabung Haji's financial statement ending Dec 31, 2015 showed the pilgrimage fund would not have enough money to pay its depositors should they withdraw their funds all at once.

"An analysis of Tabung Haji's repayment capability showed if all depositors were to withdraw their deposits together on Dec 31, 2015, Tabung Haji would be short of RM3 billion to make the repayments," he told a press conference in Parliament today.

Read on in Malaysiakini here.

Rafizi is not dumb to know that even Banks and Financial Institutions could not meet such commitment in the event depositers withdraw en masse.

But still he raised the same issue to deceive the naive depositers into thinking Tabung Haji is in financial trouble.

He has been at it on Tabung Haji, YAPEIM and various Islamic financial institutions to instill public distrust and create lost of confidence.

Earlier, Mahathir diehard journalists and bloggers created the same issue with Tabung Haji with regard to a strategic and good bargain piece of 1MDB land. One of them was rewarded a RM10,000 a month salary from a gambling company to afford two new personal vehicles.

Banks maintain about 20% or slightly less of their total asset in liquid near cash assets to meet any immediate cash needs.

They too do not have sufficient capacity to meet any request for total withdrawal by depositers at one go.

It take sometime for other assets such as property, loans and advances, and investment to be liquidated or unwind. Rafizi's statement is ridiculous expectation on Tabung Haji.

Such massive withdrawal only occur in a phenomenon called run on the bank.

It usually happen during financial crisis that resulted in severe lost in confidence and depositers rush to withdraw their money.

In Malaysia, it happened to Malayan Banking in the 60s and on the DTC during the cooperative scandal in the 80s. Government was forced to takeover Maybank from Tan Sri Khoo Teck Puat and MCA politically suffered till today. 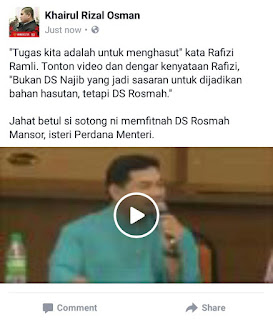 Rafizi will try to excuse himself as though raising issue of public concern. However, his intention is crystal clear to undermine public confidence in Tabung Haji with the hope to cause a run.

He failed in his first time on Tabung Haji through NOW but no serious action have been taken against him yet.

Only recently, it was reported that his so-called whistleblower NGO but more a political slandering think tank is under investigation. He is screaming malice but SSM's reply said it has the power to raid without notice.

In addition, he has gone nitpicking on Tabung Haji's other investment and making mountain out molehill to claim losses in specific project at certain operational subsidiary.

Were the state companies loss free when he was working at Selangor Economic Adviser office?

These days any action against the other side will be spinned as why not 1MDB. Same excuse opposition is using to oppose the law to regulate political funding.

And that is exactly the same psywar game to prop up sentiment and justify the destructive actions against public institution.

A run on Tabung Haji will have serious consequences on Malaysia's financial system and our reputation as a leading global centre for Islamic finance. It takes a lot of effort over many years to attain such status.

Actions of Rafizi and the previous bloggers tantamount to betrayal towards their faith, if munafiq or fasiq are too extreme an accusation.

Government have a commitment to guarantee every deposit of Tabung Haji. Most likely, Rafizi's insidious intention is to put the government in a financial bind in view of the tight budgetary constraint.

It is most irresponsible of this leader admired by the new generation of voters for his vocal brevity! 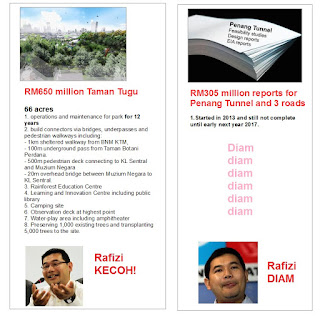 For depositers of Tabung Haji, they are not required to pay witholding tax on the profit.

An account and deposit with Tabung Haji is required to queue for the opportunity to perform Haj. The thousands gullible ones found themselves forfeited out of the waiting list.

Slandering or misrepresenting the truth in any allegations against Tabung Haji or other Islamic institution should be seen as treasonous act on the ummah and nation.

Serious action must be taken on this unrepenting slanderor politician. In his public allegations of alleged wrongdoing of government, he constantly twist fact, spin stories, fabricate data, and conjure up untrue allegations to manipulate public sentiment against government

Over the course of his political career since resigning from Petronas and subsequent employments, it can be summarised that 90% of his allegations are not truthful and even the ones with some pinch of truth are usually blown out of proportion. 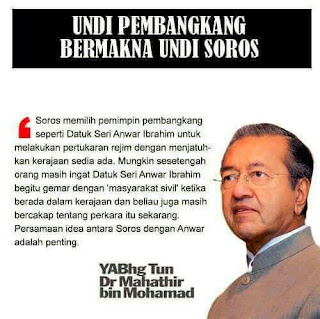 This is not healthy politics and both the public and authorities should punish practitioners of such destructive politics.

It is as bad as supporting Bersih 5.0, in which documentary proofs recently revealed them working hand in glove with George Soros.

The public should be reminded of Mahathir's vocal attack against Soros and foreigners interference in Malaysian politics.

That was the era before he betrayed his own Mahathirism principles for sake of Mukhriz. 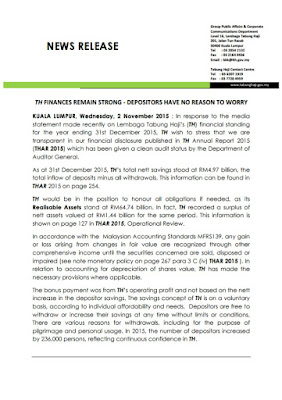 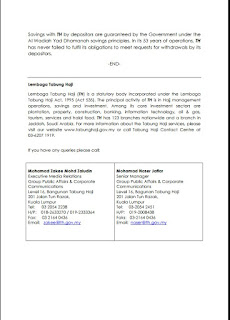 Seriously, ICAEW should review Rafizi's accounting qualification. His allegations made in public reflects badly on the quality of their accredition.

I'm not a fan of Rafizi too... but when Reza was seen with the entourage to China, it just don't bode well for the good image of our PM and the country.
And... people would not make a big fuss about it too... if Reza is not implicated in DoJ's Kleptocracy Assets Recovery Initiative... asset forfeiture civil suit with Jho Low.

If not because of 1MDB-Jho Low's Billions of debt, its rationalization plan and its yearly interest of RM2.3 Billion, nobody would have any worries about "investment China made in Malaysia".
Of-course... the source of Chinese funds are not raised locally in Malaysia. Unless of-course, if Najib is willing to use monies from PNB, KWSP, TH or Yapiem... yet again.
The Rakyat would not like to hear news such as.. sale of 60% Bandar Malaysia, being paid in 2022... again.

You have lost the plot. It is not najib's jet. Get your facts in order. I come by everyday because i am a student. My lecturer told me to look at the quality of a "team" that has no skill, no ability, no rationality or in short "pure inbred idiots" as my lecturer puts it but makes good dough.

Suggest you get your lecturer to correct your comment first before posting.

Can't understand you. Believe me there is no plot. Riza's ride is hardly the issue and petty only school kids ponder over.

You are not a fan of Rafizi but argue like him. Why raise of using TH or Yapeim money when it has yet to happen.

Making such speculation can be misconstrued as negative and best way forward is to do nothing.

Dont worry about the KARI thing. At least he is not hiding. You should worry as to why DOJ made no stmt since 28th.

Has FBI got the AG lynched, pun intended or now in hiding?

We should make an open challenge to Lapiji to withdraw all his money in Tabung Haji. He raked good dividen from TH and at the same time sowing doubt on the institution in order to gain popularity among his zombie supporters.