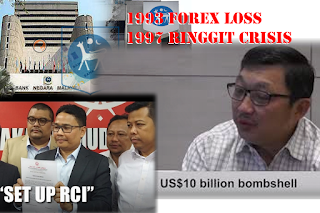 Prime Minister's Office announced a Special Taskforce, as approved by Cabinet as opposed to some former Attorney General chimply formed one, to investigate the foreign exchange losses by Bank Negara Malaysia as announced in 1993.

The taskforce should comprise representatives of various government agencies as well as highly respected individuals who were experts in certain fields. The Chairman is former Chief Secretary, Tan Sri Mohd Sidek Hasan.

This Tun Dr Mahathir era PTD man better not do a Sir Humphrey Appleby to cover-up his fellow civil servant. He was given the term of reference "to make recommendations and suggestions as soon as possible for the consideration of the Cabinet for follow-up action to be taken, including the setting up of a Royal Commission of Inquiry, if necessary, based on the outcome of the probe."

To do a taskforce first, it is better than doing an RCI immediately. It is not just a matter of finding whose at fault but also, it is a precautionary move. Who knows Dato Abdul Murad could be setting up a trap or talking to cover himself?

The Mole commentary here cautiously warned Murad maybe under investigation for money laundering or other offenses in BNM relating to his role allegedly managing one of many Dato Seri Anwar Ibbrahim's political war chest.

Furthermore, there must be precaution from revealing information that could jeopardise the country's interest as the sequel commentary yesterday here.

The commentators noticed a "yuge" jump in "gold and foreign reserves from RM46.074 billion for 1992 to RM75.309 billion for 1993. It could mean there was an outstanding exposure of at least RM29.235 billion worth of foreign currency."

Did BNM overstated the reserves?

He believed that "Hedge fund traders might have sensed the reported foreign reserve was overstated." It made the country vulnerable to a currency attack in 1997, a mere 4 years after BNM admitted to the losses. If it is true, then it is unfair to blame George Soros. It is BNM's own fault!

In his analysis, the losses at today's exchange rate could be up to RM70 billion.

But the consequential devastation to the country should include "the economic loss from the sale of government assets, the economic crisis as a result of the forex loss, and fallen entrepreneurs, businessmen and industry captains of the era."

The estimated RM70 billion figure was more than amount revealed by Murad and UMNO Youth Deputy Chief of RM30 billion (at the exchange rate then).

Part of it was probably hidden through deferred expenditure in which the losses could have been amortised over 10 years till 2003. More than 13 years has passed, thus it is save to reveal. Most likely the "statutory of limitation" on OSA has lapsed for Murad to talk.

The figures revealed  by the BNM annual accounts are on net basis. The true figure has to be investigated by the taskforce.

Only publicly known was BNM sold MAS and MISC shares.

In a corporate exercise, it would usually involved revaluation of asset. Government asset are not subject to annual snooping around of valuers at places they should never ever be there. Was it done?

The MAS shares was sold to Tan Sri Tajuddin Ramli for RM1.8 billion at RM8 per share at a time the shares were trading at around RM3.50.

In his view, it is extraordinary to sell such high premium without control. Likely part of the bargain is for a buyback. In his memoir, Mahathir claimed of no such arrangement. It makes no sense. He lied as usual!

While Tajuddin purchase of MAS was fairly transparent, the writer claimed the MISC share sales were not transparent. It was sold to KWAP, resold to Mirzan and likely a buyback also by Mahathir's favourite bailout bank, Petronas.

He commented: "It is somewhat embarrassing but the private sector was brought in to bailout a government institution. The extent of bailout in that era was more than what is already known."

Since there was cover-up of the true losses and the modus operandi to salvage the negative capital BNM, and the perpetrator was shielded and honoured with a Tan Sri-ship, there could be more.

Zeti was quoted by FMT here for saying, "The central bank has in place the most rigorous risk management and governance structure to ensure something like that never happens again.

"After that event, tremendous discipline followed."

Since it is a distant past and likely safe to reveal what already was "completely investigated" and subsequent finding by Sidek Hassan team.


The devastation was more than any politics of the day. It is too late for retribution. Time has passed. However, the perpetrators should be made known.

They should not be given the opportunity to repeat their reckless act. The wrong person should not continually be blamed. The country should not be burdened by the ghost of the past. It is time for correction.

The past should not continue to drag the country from moving forward.

There are many of those whose wealth and life were miserably affected and could never recover from the reckless indulgence of the Mamak Tan Sri and the Mamak he may have directly answered to.

It is no joking matter and some former editor should not try to deny what was an open secret to the global foreign exchange market of the time.
at 2/24/2017 12:45:00 PM

you and those people should be worried
ever wonder why all people are willing help investigate that?
could be they are doing some kind of porker face, but u should be actively thinking

why oh why, these people are very willing to help?

we all know these few stuffs u said, are supposely to nail him. what if u cant nail him and then something else came out? i mean, u know, could be a worm of can of someone else?

murad should know, he is playing with fire. fire burn stuff. most probably when the fire gets too hot and start burning stuff, murad should know these people will leave him burnt. these people, they dont know how to make friends. every move they make, they create more enemies than friends.

rakyat is asking, what the need of the roadshows? if he is to be found guilty, then just do whatever the rules say. u people said u want to thoroughly investigate, so just lodge a report and start investigating. roadshows? rakyat know what is going on to be honest.

Sources claimed Tun M was impress with program trading and gave the go ahead.

Same like he thought he could make money from commodity trading by cornering the tin market. Just like the hunt brothers lost heavily for similar attempt on silver, he and malaysia lost too. It led to maminco.

Madey did't learn too about program trading was one of the reason behind the sharp fall on black monday 1987.

Stubbornness is the signs of a person with inferiority complex but hidden in his hype of greatness.