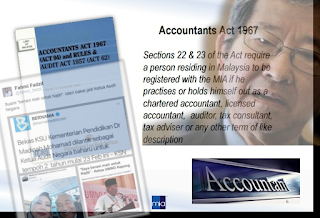 Till the court make another decision on the definition of public officer, a clearer demarcation on the legal authority of politicians vis-a-vis civil servant will have to wait. It is an important decision in the light of high officials in government being charged for corruption and money laundering.

The latest warning from MACC Chief Commissioner, Dato Dzulkifli could mean a Member of Parliament will be charged soon. Still waiting on the development of the investigation in Malacca and Selangor.

Since the statement by Dato Johari Ghani on the bloated civil service, public discussion has not subsided. The latest appointment of Tan Sri Dr Madinah Mohamad as Auditor General of Malaysia to replace the retiring Tan Sri Ambrin Buang has its significance with regard to the commonly heard complain on civil service incompetency and efficiency.

A political issue was raised by PKR Communication Director, Fahmi Fadzil on the political statement made by her husband, Datuk Ridzuan Abdul Hamid, who is the UMNO Kepong Division Head in the midst of Tun Dr Mahathir's failed coup using 1MDB to topple Dato Najib at the UMNO General Assembly n 2015.

What is interesting is their MP for Kepong from DAP, Dr Tan Seng Giaw came to their defense. [Read in Sundaily and Mkini]. However, Fahmi Fadzil and echoed by Cynthia Gabriel of C4 have valid issue on her qualification

Dr Dzulkifli of PAN is not right to say nothing wrong with her qualification and it is not a question of accounting, but integrity. To question the integrity of government by associating her husband, it is merely politics in play.

Dr Tan has a valid point as there are such examples of husband's political leaning and opinion has no bearing on the wife's professionalism. A case in point is the Secretary General for MITI, Tan Sri Dr Rebecca Fatima Sta Maria and said to be critical journalist husband, S. Jayasankaran.

The likelihood is Fahmi Fadzil is questioning the appointment as though he favoured a replica of the  retiring Tan Sri Ambrin Buang.

Ambrin had been critical of wastage in government and the AG annual report was something politicians look forward to highlight weakness with the other side. Seldom the case the weakness mentioned is unverified and ignore the explanation made to the auditors.

The anti-Najib and opposition had pin much hope in the AG's report to PAC on 1MDB but it was put on OSA status. The information leaked and promoted by opposition suffer the same problem of making unverified assertions.

Fahmi's interest is political and rhetorical thus of limited relevance to real matter of governance and administration. But putting politics aside, Fahmi and Cynthia point on Madinah's accountng qualification could be stretched to Ambrin. 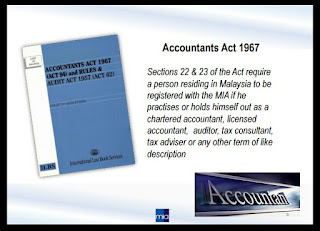 According to the strict interpretation of Accountant Act 1958, both Ambrin and Madinah do not have the professional qualification to carry the title of Auditor in their position.

Ambrin has a Bachelor's degree in Economics from UM and Masters in International Business from basketball famed University of South Carolina. Madinah's qualification is a first degree in Political Science from USM and Masters and Doctoral degree in Human Resource from UPM.

Both are considered a career public administrator, a typical PTD jack of all trade and master of none. A degree in religous jurispudence or Usuluddin and the right phone call can get anyone into Intan and the special track up, PTD.

If they have some level of aptitude, attitude and "pandai main politik pegawai kerajaan", they could be  Treasury Secretary General or Chief Secretary to the Government.

At a time the country should be moving up the competency curve and moving abroad to compete in the world, our government is administered by insufficiently qualified and technically deficient administrators.

These politicians worried of Madinah appointment has basis to be concerned because these PTD top administrators are only those capable in the organisational politics of government or in the crude description, "mereka yang pandai bodek boss".

There are capable people and some are appropriately placed like the CPA qualified Accountant General.

By right, instead of the walking on air and distanced from operational reality Keling, it is people like him that should be the KSP. Tan Sri Dr Irawan Siregar messed up the GST implementation by the incompetence of the reknowned corrupt Customs Department.

Distinguish between Indian and Keling, please. Don't be racial.

Unfortunately, the suitably qualified are seldom inappropriately placed. The KSU replacing Madinah at the Ministry of Education is Dato Seri Alias Ahmad.

Why is someone with Masters in Strategic and Defense Studies, a diploma in Intelligent and Security from Taiwan Military College, Taipei and Certificate in Emergency Responses from College of Emergency and Disasters Responses, Yorkshire be transfered out of MKN to do Education?

Before Dr Dzulkifli can talk of integrity, he has to understand that qualification and relevant experience is priority. This is an area that highlight the glaring weakness of the PTD system. It could be the root cause of the malaise and corruption in the civil service.

Madinah ni crony ALi Hamsa. Alias put aside for another crony Ali Hamsa. What is this with these mamak. Can they stop with their cronyism PPl can see!!!

BTW, Accountant Act for ublic practise. Does not apply to gomen. But you got your point on this generalist administrator PTDs. They are of no use but merely creating another layer of bureaucrasy. A waste of public money.