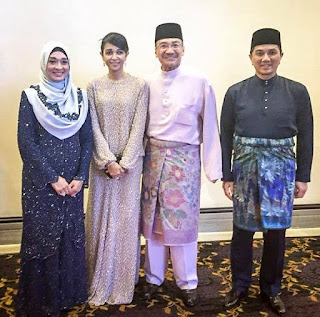 Yes, Dato Seri Anwar Ibrahim may not be PM. Neither will Tan Sri Muhyiddin.

Must say, many would agree with the view of FMT’s TK Chua, Msia Insider's James Chai and Kim Quek, and M’kini’s pro-DAP Gunasegaran. The current politics is revolting. Country is going to the dogs – everything is down or will go down further, but cost of consumer goods are up.

More so, it is frustrating for this blogger, who warned of PPBM gameplan codenamed as Game Changer back in April, but live to see it happen. It made Anwar’s failed 916 and Sabah’s long history of frogging as child’s play.

Though many Malaysians are concerned with the state of the nation, the majority could still be in the old habit of finding escapism by looking in awe at the destructive politics of Tun Dr Mahathir. He has always been a politician first and never really the serious nation building statesman. His hands has a reverse Midas touch, including destroying his own efforts.

Cutting through the chase, the A and H in the acronym MAHATHIR to succeed the acronym RAHMAN of UMNO PMs will likely be Dato Seri Azmin and Dato Seri Hishamuddin Hussein Onn.

The steps are not known, but most likely, Mahathir will find reasons to close UMNO 2.0. According to sources within PPBM, there will be some kind of merger to transform PPBM into UMNO 3.0. Raja Petra has wrote of UMNO 3.0 before. MCA and DAP leader now begin to see it.

Behind every of Mahathir's move is money. So UMNO 3.0 could be wiping out the last trail of evidence in UMNO 2.0 of the robbing of UMNO 1.0 by Mahathir and Daim. 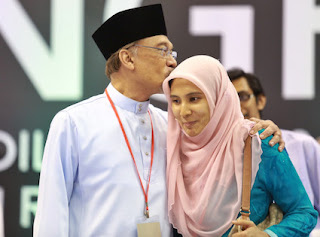 By now, it is almost pointless to discuss why it is not Anwar Ibrahim. It is a foregone conclusion the moment Rafizi lost PKR’s Deputy Presidency. Larry Sng and father Dato Sng Chee Wah's tricks at Julau could not stop Azmin's last dash in Sabah and Sarawak.

The only last hope for Anwar is Lim Kit Siang’s threat to leave PH in the event it deviate from the Malaysia Baru aspirations. And, PAN will act as a truly DAP's poodle.

Right now, there is a power struggle in the making within PKR and Latheefa Koya’s indirect attack at Anwar and Nurul Izzah is Azmin’s offensive at work.

However, Nurul’s decision to quit could be more than the rhetorics she claimed. Heard it is sulking due to family matter and not internal PKR power struggle in the making. Nothing to do with KJ pursuing another daughter of a PM-in-the-making.

The power struggle could be Azmin’s attempt to find a reason to leave PKR. He and his people denied it, but during PKR party election, talk was Azmin's other option is to join PPBM in the event he lose. 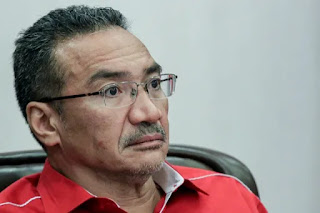 But why Hishamuddin as DPM in the event Azmin succeed Mahathir and promised no harm on Mahathir, his children (and grandchildren) and their wealth in Malaysia and abroad including at P Ramlee’s imaginary nation of Gohead Gostan?

Well, not because Rafi Awang Kecik hate him and made some truly revealing expose, which few knew of, in his Facebook.

Maybe it is part of the deal for working to disrupt UMNO from within. Though Hishamuddin denied several times, he is the hand working to convince 40 UMNO MPs to support Mahathir. Zahid failed to read the ground that UMNO is more comfortable with Mahathir than Anwar.

It is not far fetch because Hishamuddin has family link to Tan Sri Mokhzani Mahathir’s wife. Jani’s father-in-law, Dato Mat Abid is adopted into the household of Hishamuddin’s grandfather (father side), Dato Onn Jaafar. He is cousin to Dato Najib through mother side, their grandfather, late Tan Sri Noah.

Che Alwi Ahmad confirmed to Joceline Tan of Azmin's presence at the gathering held at Hishamuddin’s house. It confirmed Hishamuddin's collusion with Azmin. This is an open secret and became public knowledge when he attended the wedding of Azmin’s first child.

This formula is logical because Azmin is more capable of leading PPBM than Mukhriz. To Kedahans in the know, Mukhriz couldn’t care less and Mahathir is known to have told visitor seeking his audience that Mukhriz is a weak leader.

If Mahathir was to meet his maker soon, and the possibility is always there at this late of age, more so, he fell during his official visit to Brunei, PPBM will instantly fragmentalise under Mukhriz. 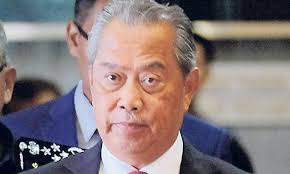 This discussion left out current PPBM President, Muhyiddin. The general belief is he will not remain in the position of President in view of his Pancreatic Cancer and chemotheraphy treatment he is undergoing.

Mukhriz is heard yearning to return to a Cabinet position and his city lifestyle in KL. The rumour is Mukhriz's targeted Ministry is Home Ministry and that had slighted Muhyiddin.

Unless Muhyiddin found some miraculous cancer treatment and as Home Minister, it is unlikely to be Cannabis treatment (could he?), Muhyiddin is out of the picture. If he is frustrated for missing out the number 2 position several times in the past and did not attain the number 1 after being Najib’s number 2, think of Anwar.

Maybe it is too early to discount Muhyiddin, but bear in mind, the migration of members out of PPBM before GE was due to disagreements with Muhyiddin and the anti Muhyiddin group could still be within PPBM.

With the statement of Rafizi and Johari Abdul including the possibility Nurul's resignation is genuine, is it a white flag and for certain that Anwar is out of the picture?

How will the numbers stack up?

According to a former Johorean wakil rakyat, Hishamuddin has 35 seats in-hand. Add that to PPBM 13, that is 48.

Azmin has 25 PKR MPs to migrate but the latest is said to be 20. That makes it 68, making PPBM the biggest block in PH.

Sabah and Sarawak need to be figured out.

The Sabah UMNO leaders expressed their position to support the current government. However, Mahathir already has Warisan. Not sure PPBM will move into Sabah. It could be suicidal, Mahathir knows.

But Mahathir did enter Sarawak but why Bintulu? Token as decoy or threat?

It is said Taib Mahmud will back Mahathir, but Abang Johari is close with Anwar. Whatever the outcome, GPS will decide based on consensus and could support whoever come out as winner in Semenanjung.

It means Mahathir may have some PAN MPs on his side. Remember Abang Mat was Mahathir’s mouthpiece to whack Anwar when he was in UMNO and labelled him Al Juburi.

7 from DAP to join Mahathir? 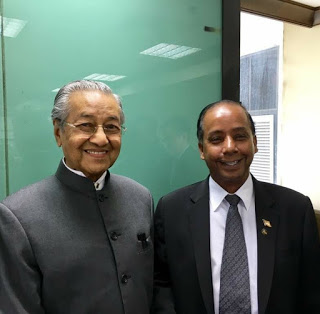 According to the Johorean source, there will be 7 DAP MPs jumping over to Mahathir.

After several weeks of pondering and inquiring, including with some DAP friends, it is not possible for any DAP MP to leave with DAP in the Government driver seat. There maybe anti-Lim family faction like those in Perak, but it is unlikely they will leave DAP and join Mahathir.

Never mind that Lim Guan Eng is upset and had to follow Mahathir’s directive to kow tow to China and allocate RM77 million to Felda. DAP can ignore Mahathir and resist him in cabinet meeting. They hold the levers of power.

Seeing Mahathir likely refusal to sack Waythamoorthy and the loud voices of DAP Indians like P Ramasamy, it is possible that the 7 could be coming from DAP Indians.

Not sure (more, not bothered to check) yet whether there are 7 Indian DAP MPs, but the Indian support could be the pull factor for Mahathir to secure for Azmin more than 20 PKR MPs from among Indian MPs. 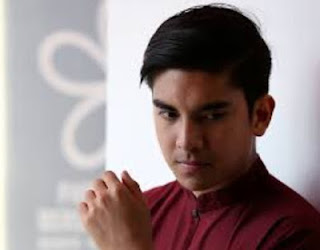 In the midst of the calls for Waytha's resignations, Syed Saddiq is not putting up an act for PM, but his and Armada’s demand for Waytha is politically motivated.

Saddiq is running to win a seat on PPBM’s MPT. Will he get the support of diehard Mahathirists in PPBM after ignoring the old man’s position on PTPTN and inability to read Mahathir’s game with Waytha?

The boy is just vocal but immature. He got too big-headed from the attention given to him from Mahathir, Daim, Muhyiddin, and even Anwar. However, he still get pushed around and still being treated as a kid by Mahathir’s officers.

He is far from able to understand the intricacies of the Game Changer strategy. The frogging plan was to happen before, during and after General Election. The intention was partly psychological and partly to let UMNO use their money to win the seats but only shift later to PPBM.

Both Mahathir and Daim are too “kedekut” (miserly) and will not spend their own money. When Daim gave RM30 million for PPBM campaign, he told sources that it is an investment which will not yield return. 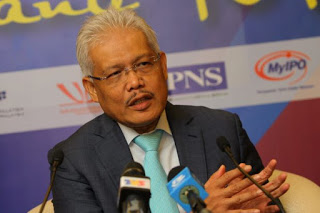 It was heard that money was brought in for GE by Daim through Brunei. It could partly explain the reason the Brunei Sultan was the first leader to pay respect to Mahathir upon receiving appointment as PM from Agong.

The money was meant to buy UMNO MPs for the Game Changer.

There were rumours claiming Yayasan Kepimpinan Perdana received €2 billon donation but its too obvious to be possible. A new blog claimed the money to buy is RM2 billion, came from Ting Pek Khiing, and Hamzah Zainuddin distributed it.

However, Ting is bankrupt, dead broke and businesses under receivership. He was even beaten up by creditors for non-payment of merely hundred thousands. Maybe he was merely proxy as he had always been. Remember the announced RM30 billion city on water in Langkawi?

Currently, the apparatus used to instill fear and get UMNO MPs to jump is investigation for corruption and money laundering by law enforcement authorities.

The late Sanusi Junid did say in a PPBM meeting and even outside for quite sometime that it is not difficult to turnover UMNO MPs. Threaten with AMLA. Najib’s amended AMLA was particularly useful.

However, Ku Nan's prosecution for corruption may have changed a deal made with Daim. It could be Lim Kit Siang and Anwar trying to hold back the tide. Among the MPs planning to jump, the charge put them in a state of confusion.

Mahathir is not lying or U turn or doing deception when he said they never expect to win.  The 13 Parliamentary seats was the best they could do, said a source in DAP.

Following the lower than their planned outcome, the Game Changer was put on hold but varied for use as defensive mechanism in the event of a challenge on the three MB seats held by PPBM.

Rembau Times claims that Umno will be back in power. these umno traitors are jumping at bad time

Dont discout Mohammad Hassan , UMNO acting President. He could be the H in that Mahathir theory....

And after next PRU lets see if Bersatu would have as many MPS after the cross overs... UMNO if not deregistered would have a bigger grassroot support and together with PAS may form a new alliance. The Malays are seeing reality for the first time and they do not like it.