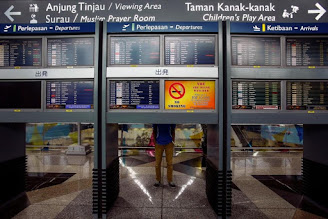 The government opened tender for the Integrated Immigration System (IIS) and in September 2018, announced receiving 30 bids ranging from RM1 billion to RM1.8 billion.
The single company contract attracted known local players such as Scicom, Datasonic, HeiTech Padu, etc.
The contract attracted public interest because the RM3.5 billionn Sistem Kawalan Imigresen Nasional (SKIN) concession awarded to Prestariang in August 2017 was to replace the frequently breaking down MyIMM. My Home Minister Dato Hamzah Zainuddin acknowledged the weakness of MyIMM.
SKIN system development commenced work, but PH government cancelled it. It will be 3 years in 2023 before IIS will be operationalise. The re-tender was criticised as waste of time and resources, and political witch hunting.
By third quarter, the winning bid is expected to be announced. Latest heard is some 10 names, later two more added, have been short listed.
Judging from the names, there is this gnawing suspicion that Dr Abu Hassan Ismail and Prestariang was made sacrificial lamb for certain self interest.
Frontrunner
Focus Malaysia reported recently: 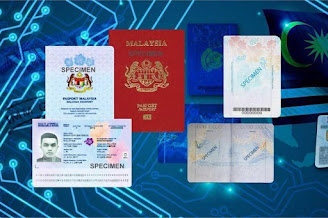 The RM1.5 bil National Integrated Immigration System (IIS) is expected to be awarded soon and the frontrunners have been identified.
The usual suspects include listed tech giants Datasonic Group Bhd, Scicom (MSC) Bhd, HeiTech Padu Bhd and Opcom Holdings Bhd. Thrown in the mix are Iris Corp Bhd and MyEG Services Bhd.
But there is also an unlisted company that identifies as a global integrated security solutions provider for governments and enterprises – S5 Systems Sdn Bhd. This was reported by FocusM in December last year.
Given that this company is privately held, not much is known about them. According to company filings, the ultimate beneficial owner of the company is an offshore or overseas entity NSA Technology (L) Inc which in turn owns NSA Technology Sdn Bhd, the parent company of S5 Systems.

S5 Systems’ directors are Syed Mohammad Hafiz Syed Razlan, Aaron Loke Khy-Min, Kurian Thomas Jacob Thomas, Effendi Ramli and Chan See Siang.
Syed Mohammad Hafiz is the sole director of NSA Technology Sdn Bhd. Both S5 Systems and NSA Technology share an office.
Syed Mohammad Hafiz’s father Syed Razlan Syed Putra Jamalullail is the younger brother of Raja Perlis Tuanku Syed Sirajuddin Putra Jamalullail. Syed Razlan was former Arau MP and he joined Bersatu from Umno on July 15, 2018.
Syed Mohammad Hafiz also owns a 0.42% stake in listed automobile leather seat designer Pecca Group Bhd.
But the trail stops there as NSA Technology (L) Inc is an offshore or overseas company. Its shareholders and owners can’t be ascertained except for a 2016 report that links NSA Technology Sdn Bhd to well-connected entrepreneur Johann Young. But company filings for NSA Technology Sdn Bhd do not reflect Young’s name.
This raises questions as the IIS is a matter of national security.
According to the latest filings, S5 Systems’ total assets stood at RM82.7 mil with revenue of RM116.8 mil and a profit-after-tax of RM68.3 mil for the financial year ended June 30, 2019.
For context, other frontrunners especially the listed companies have better transparency as they are subject to Main Market requirements and are under the purview of Bursa Malaysia.
Conversely, S5 Systems remains a relatively unknown company in the matter with no clear ultimate beneficial owner. This raises concerns that an important tender involving national security might be awarded to an opaque company.
At the time of writing, FocusM’s attempts to contact S5 Systems as well as NSA Technology were unsuccessful. – June 10, 2020

Who is S5?
S5 have been getting the attention or promoted by NST below:

IIS contract to be awarded in 3Q this year
By NST Business - June 30, 2020 @ 1:07pm
KUALA LUMPUR: The RM1.5 billion National Integrated Immigration System (IIS) is expected to be awarded in the third quarter of this year, sources said.
Talks have it that S5 Holdings Inc's unit S5 Systems Sdn Bhd has joined the likes of Iris Corp Bhd, MyEG Services Bhd, Datasonic Group Bhd and HeiTech Padu Bhd as bidders for the contract.
S5 Systems had the track record and position as a market leader in the provision of national security solutions, said people with knowledge on the matter.
The ISS project is essentially the new version of what was previously called SKIN or Sistem Kawalan Imigresen Nasional, worth RM3.5 billion.
According to the latest filings, S5 Systems' total assets stand at RM82.7 million.
It's net profit for the year ended June 30, 2019 was RM68.3 million on the back of a revenue of RM116.8 million.
It is learned that S5 Systems is eyeing a backdoor listing via ConnectCounty Holdings Bhd as the fastest means to raise more funds to fully complete the ISS project should it get it, and to secure more jobs from the government.
At the time of writing, the New Straits Times' attempts to contact S5 Systems and ConnectCounty were unsuccessful.
In a filing with Bursa Malaysia on June 16, ConnectCounty informed that it was in negotiations with the relevant party pertaining to the possible reverse takeover involving S5 Systems.
"The company has not signed any agreement on the said matter. However, it shall make the necessary announcement when there are further developments on this matter," it said, when clarifying an article on an investors' portal.
It was quoted in the article that ConnectCounty would be the next vehicle for the backdoor listing by S5 Systems.
Meanwhile, MyEG Services said it was taking a 10 per cent stake in S5 Holdings.
MyEG Services's wholly-owned My E.G. Capital Sdn Bhd (MyEG Capital) had entered into a share sale agreement with Merrington Assets Ltd early this month to buy 118 million shares or 10 per cent of S5 Holdings for RM90 million.
The company told Bursa that the planned acquisition was based on S5 group's track record and future prospects as well as the potential synergistic benefits arising from the acquisition and the favourable outlook of the digitalisation of government services.

The Edge wrote that S5 system approached all the other bidders and offered their biometric system. S5 is in a consortium with MyEg and Heitech Padu.
And, MyEG is heard to pursue the IIS contract through several routes and the suspicion is they are backing other shortlisted bidder too.
DNeX and Scicom is mentioned also as having a chance.
Datasonic?
Another company to be taken notice is Datasonic.
It has a secured position and expected to get extension for the passports and NRIC contracts with government with an additional contract recently.
The market is strongly viewing Datasonic as a frontrunner on the strength of their experience in biometric facial recognition for border control system, next generation system JV and online foreign worker online registration.
Government will be more serious in the use of biometric security system. More contract flow for Datasonic. 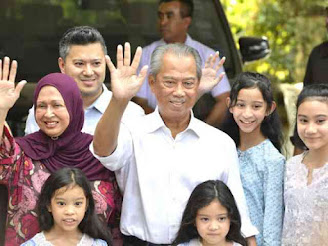 Talk within the political circle is that PM's son and/or son-in-law is/are active in the biometric and payment system businesses.
The manner pro-opposition mainstream media are raising issues it is as if PM's son and/or son-in-law is/are involved in the IIS tender. Is any of them behind Datasonic or MyEg.com or S5?
Illegal immigrants and fake NRIC became a public concern during Muhyiddin's tenure as PH Home Minister. It needs solutions.
Under Hamzah, the buzz among businessmen offering solutions is Home Ministry is off limit for others. It is PPBM's fishing spot.
Prestariang sacrificial lamb 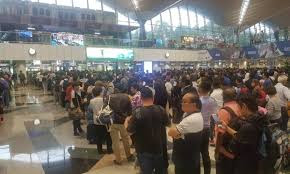 There was a system failure at KLIA and KLIA2 in August last year during one of the holidays. It resulted in massive congestion and airport had to go manual.
Pro-BN social media commentators speculated it was part of a PH scam to bring in illegal immigrant by disfunctioning the immigration system.
It seemed believable because PH government unilaterally terminated the 15-year RM3.5 billion SKIN consession awarded to Prestariang Berhad in a letter dated December 2018.
Prestariang were awarded the concession in August 2017. Coincidently there was congestion in the month and year the contract was awarded due to high volume of travelers for Immigration system to handle.
However, the congestion last year was due to airport network system failure. Nevertheless, the immigration system has since been under the radar of business media.
Prestariang suffered financially from the ordeal. Once a more than a billion ringgit capitalisation company, it is reduced to few hundred millions.
Founder, President and CEO Dr Abu Hassan Ismail lost his company. It seemed Prestariang could not recover from the surprise. Market speculated it was no more a viable ongoing concern.
There was resentment towards PH for killing off a rising Malay entrepreneur. And, public supported Prestariang's action to sue government for RM733 million in April 2019.
Prestariang took the mediation route last September as a hedge and there was a two hour mediation in court in late October.
Latest court decision indicated government will have to pay Dr Abu compensation. He could subsequently restart Prestariang by subscribing to a 15% private placement.
There was a debate in August 2019 on whether to revive SKIN or IIS. However, the then Home Minister, Tan Sri Muhyiddin Yassin ended any possibility of reviving SKIN as early as May 2019.
With the suspicious happening evolving around the IIS tender, were Dr Abu and Prestariang made a sacrifical lamb for Muhyiddin's family and PPBM?
at 8/04/2020 02:57:00 PM

I m sure you know blkg S5 to Adlan, menantu Abah.

S5 belong to Adlan, after a fight with the previous owner DS Johann Young. Adlan put Syed as proxy. S5 did not participate in the tender but been actively selling solution to the other bidders.

Based on 40 years experience, IRIS is the only company capable of undertaking this national job. Another major disaster if any other company is awarded this tender.