Khazanah's Nation Builder choice for Silterra is only one 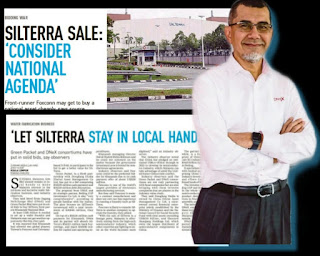 Previously, Silterra sales issue had been kept within the business column. In September, this blog took interest and fired first salvo at Khazanah Nasional.

Having consistently failed in any corporate recovery exercise which require operational turnaround, Silterra should be passed on to a more capable local as it is essential for the local semiconductor segment and elecronic sector.

The issue caught on in the social media and even received Dato Najib's attention in his FB. Thanks to the MP from Kuala Selangor, Dato Seri Dr Dzulkifli Ahmad, the issue received higher prominance.

Dzulkifli raised the Silterra sales issue in Parliament and received a positive response from Minister of Science, Technology and Innovation Khairy Jamaluddin. Extract from Bernama below:

On SilTerra, Khairy said the government was preparing a memorandum to make a stand on national interests before deciding on the future of the local semiconductor company.

Khazanah should take heed. Will PPBM Ministers in the PN government remain egoistic and stubborn  to continue asset sales program of PH and lack any ability to be innovative?

The fear is the only number matter thinking of accountants and Investment Bankers on the Board of Direcors of Khazanah may not have the nation building mindset to appreciate selling it to more capable local. 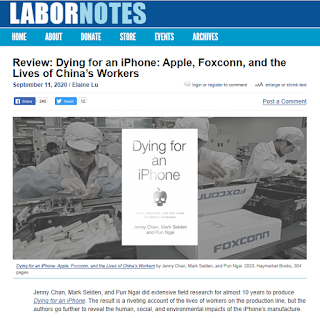 It would be sad should they swallow the generous offer from Foxconn.

To the Taiwanese, buying Silterra is a matter of their national pride and willing to name the price. A Taiwanese technology managed to be introduced into the Malaysian agriculture industry received much attention in their country.

Will Malaysians have any sense of pride in the ability of its people and company?

The popular iPhone that became the fad and much sought after for its latest releases is made on the back of the lives of China's workers. The brutal exploitation of workers which are expected to work 29 days a month with no talking or eating allowed, reported South China Morning Post.

Apple acknowledged Foxconn violated labour rules. Apple and Foxconn admitted abusing Chinese labour law to employ 50% of worker on temporary basis. It serve the company to keep labour cost as flexible in he face of low sales. BBC reported these workers are generally underpaid, forced to do 100 hours of overtime a month to meet peak production period, and no pay for sick leave.

Foxconn were able to get away with such abuse by being the main employer in a town in Shenzen. Foxconn City China employs 350,000 workers. The worse abuse were to part-timer from among students. Borgen Project reported these interns were paid measly US$3.15 per hour.

The sales pitch of Foxconn to the government would be impressive, promising high salary, and meets the expectation to provide jobs to take up the high unemployment. However, if the supposedly political adversary to China could get away with "murder" there, what more could it do to a lax enforcement Malaysia?

Foxconn's interest in Silterra is to built an adjoining plant to the existing plant in Kulim to manufacture iPhone. Are they bothered to assist the development of the local semiconductor industry? 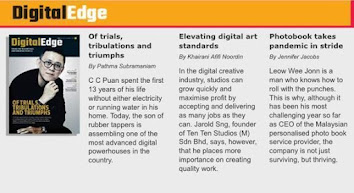 The role of Silterra was to develop the capability of the local semi-conductor industry has to be the prime concern of government.

Khazanah is the supposed custodian of technology in Malaysia. That was the original role Khazanah when it was established towards the end of Tun Dr Mahathir's tenure as #PM4. Selling it to a foreigner will not serve that role, bot even to the German X-Tab. They still need to answer to head office.

Clearly a local is needed as the local will be reliance on incentive from government, thus will meet the national expectation. 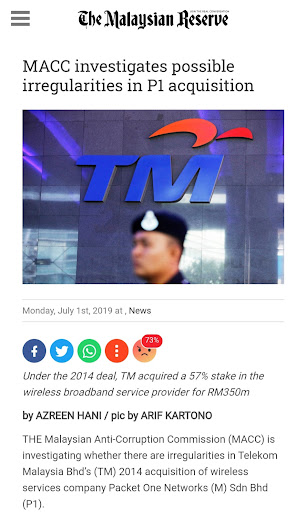 However, it will not serve the purpose to give it to a local with a questionable past, resorting to devious scheme of things for a quick easy money flip to the stock market, and suspicion of insidious insider dealing.

Having made aggressive promotion on mainstream media, Green Packet's CC Puan went aboard to unethcally reveal his confidential proposal to Khazanah publicly. [Link available in the posting here].  His latest is an aggressive self promotion cover story on Edge Digital here to neutralise bad publicity he received.

CC Puan downplayed the lingering bad publicity of MACC investigation on Green Pocket sales of P1 as part of his lifelong trial and tribulation to come out triumphant. He essentially admitted dumping losing momentum WiMAX to Telekom at allegedly overpriced sales.

Nevertheless, CC Puan is quite the typical Malaysian entrepreneur success story. The youngest children of rubber tapper amassed wealth from his initial employment and consultation work in China after graduating at age of 30 to take him to US Silicon Valley.

However, the Internet boom that went bust in 2000 brought him back to Malaysia. P1 was the biggest thing to him as it was the basis Green Packet got listed in 2005. It was sold to Telekom in 2014.

Green Packet have been exploring and "investing in digital services, with a focus on financial technology (fintech), artificial intelligence (AI) and the Internet of Things (IoT)" His attitude towards the Corona Covid pandemic is positive as he looking at opportunity to explore "low touch economy".

The go-getter is in pursuit of long list of endeavours that he may hardly sleep much to juggle his higly diversed interest. Silterra is a big endeavour that needs a dedicated team with the management skill and organisation to get it going.

Thousands of workers and staff livelihood is at stake. 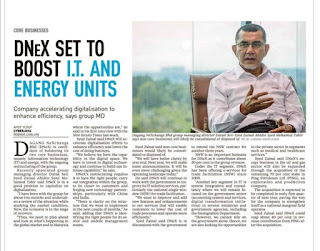 DNex, the original collaborator to turnaround Silterra was on promotion drive as new Managing Director, ex-Proton CEO and ex-Petronas described their corporate plan.

He touched on certain plans for Dagang Net involving SME, but the real attention is on Silterra bid. His pitch for Silterra is as per the extract from NST report below:

"We do have the turnaround expertise as we have managed to turn around Time Engineering Bhd, the old company of DNeX.

"We also partner with Beijing CGP Investment Co Ltd (Beijing CGP) that is willing to provide transfer of technology and ready market access to SilTerra," he told the New Straits Times (NST) and Berita Harian in an interview recently.

He said this would be vital as DNeX has the track record and capability with the partnership to turnaround SilTerra.

"We also want the bidding process to be based on merit including its contribution to the National Agenda – we believe we have the right partner, technology and market access. We have been working closely with the government to present our case.

"At the end of the day, it is up to Khazanah Nasional Bhd (the owner of SilTerra) to decide. We believe the board of Khazanah will make the right decision.

"We hope Khazanah considers us as a Bumiputera company with the capability and the right partner that can offer technology and market access as well as injection of funding. God willing, in the next two to three years, we plan to create more job opportunities and technology coming out with Malaysia," he said.

DNex remained upbeat on the semi-conductor business and it means, if given a chance, they know the pockets of opportunies available. Where their local competitor is flashing technology and fancy financial, DNex and their partner is committing RM1 billion into Silterra and with a serious plan. Extract from NST report below: 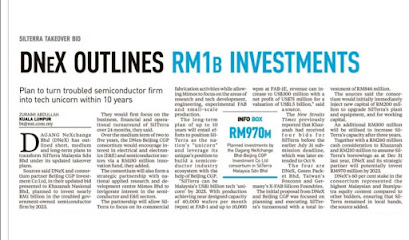 The companies would first focus on business, financial and operational turnaround of SilTerra over 24 months, they added.

Over the medium term of two to five years, the DNeX-Beijing CGP consortium will encourage interest in electrical and electronics (E&E) and semiconductor sectors via a RM150 million innovation fund.

The consortium will also form a strategic partnership with national applied research and development centre Mimos Bhd to invigorate interest in the semiconductor and E&E sectors.

The partnership will allow SilTerra to focus on its commercial fabrication activities while Mimos can focus its strength as industry enabler in the areas of R&D and tech development, engineering, experimental FAB and small scale production.

The long-term plan of up to 10 years will entail efforts to position SilTerra as the nation's Unicorn and to leverage on its unique's position to build semiconductor industry eco-system witn the help of Beijing CGP and its limited partners' network of semiconductor companies.

"SilTerra can be Malaysia's US$1 billion Unicorn for technology companies by 2025. With production achieving near designed capacity for SilTerra's FAB-1 of 40,000 wafers per month (wpm) and FAB-1E of up to 10,000 wpm, revenue can increase to US$300 million with a net profit of US$75 million at a valuation at US$1.5 billion," a source said.

Syed Zainal has been involved in Proton and Petronas. 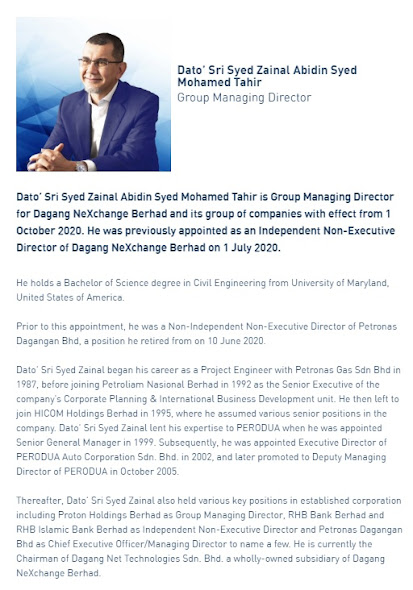 Syed Zainal understand the needs and challenges of national projects to make it happen. He has done it before and knows what is expected. Without the old man meddling and diverting focus, public company DNex with private shareholders would be more tenable for him.

Its up to Khazanah now. The choice is between a local nation builder or pure manufacturer or stock market flip artist or slave driver. The sensible choice is down to one.