Rivalry between Bersatu and Umno set to intensify 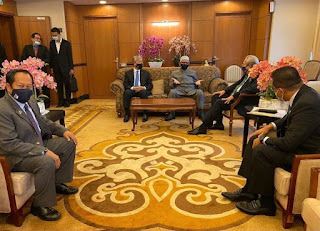 IT was a picture that was worth a thousand words.

There was an awkward air surrounding the presidents of the three ruling Malay parties when they met in the Prime Minister’s office in Parliament on Wednesday (Dec 9).

There was not much conversation in the room.

Things were certainly not fine between them and only PAS president Datuk Seri Hadi Awang seemed relaxed and comfortable.

The trio were there to sign the power of attorney for their respective parties to form a new government in Perak and put an end to the political impasse following the ouster of Datuk Seri Ahmad Faizal Azumu as Mentri Besar (MB).

The wounds were still raw and that might have explained the chilly body language between Muhyiddin and Zahid.

The political crisis in Perak has been a defining moment for the two parties.

It has blown wide open the rivalry between Umno and Bersatu and they can now stop pretending that they like each other.

After all, what Umno did to Ahmad Faizal was not even a stab-in-the-back, but a full frontal attack.

“The rivalry will intensify. The volte face by PAS must have come as a surprise for Umno but the affinity of PAS for Muhyiddin is clear by now, ” said lawyer and political commentator Ivanpal S. Grewal.

The widely held opinion about the Perak power struggle is that there were no real winners.

Bersatu lost face over the way its deputy president Ahmad Faizal was voted out during the state assembly sitting. It was such a public humiliation.

Forgoing the MB post was painful but the root of the problem lay in giving the MB post to the party that won only one state seat in the general election.

Bersatu had held the MB posts in Kedah, Perak and Johor after the general election. It has since lost all those posts but has the Chief Minister post in Sabah.

PAS was seen as the strategic one by refusing to be involved in forming the new government.

But the party tripped at a crucial moment. It was accused of snubbing the Palace after a PAS leader was reported as saying that the party had “cancelled” an audience with the Sultan.

It is not the done thing and PAS found itself excluded from the initial batch of state exco members presented to the Palace.

Its assemblymen have since apologised while its president is seeking an audience with Sultan Nazrin Muizzuddin Shah.

Umno, on the other hand, has been painted as the villain in the coup. The party was also perceived as having shot itself in the foot when the crisis dragged on without a solution.

But it was an undeniable show of force by Umno and a win whichever way one looks at it. The party, which has 25 assemblymen, had reclaimed the coveted post.

“It is back in pole position. What happened in Perak is also a reminder to parties out there that you may control important posts in the government but that cannot take you very far if you don’t have the grassroots network to advance your power and agenda, ” said Ivanpal, who was a political aide for a former Perak minister.

Zahid has not had an easy time as Umno president but his handling of the Perak crisis won him kudos from the Umno rank-and-file especially given that Perak is a complex state riddled by warlord politics.

But, former Kapar division chief Datuk Faizal Abdullah said: “Nothing wrong, it’s part of Malay manners to say sorry if we have hurt anyone. The important thing is Zahid got us what we wanted - the MB post.”

Taking back the top job is crucial to Umno’s plans to control Perak ahead of the general election because it means having the clout and power to manage and engage their grassroots.

That is what the new MB Datuk Saarani Mohamad is expected to do in the coming months.

But on the day Saarani was sworn in, the spotlight was on the Sultan who delivered an awesome speech that few had ever heard from a reigning sovereign.

“I have never heard my Sultan speak like that, it was a very strong speech, ” said Perak Umno loyalist Kassim Ismail.

Royals tend to beat about the bush with flowery prose but Sultan Nazrin was not holding back and had his crosshairs on politicians and their endless politicking.

Although the Sultan began by thanking Ahmad Faizal, many thought the speech was also a reprimand of the former MB especially when he spoke about how power and wealth can test the character of a person.

It was a stern and frank reminder to political leaders to do the right thing when entrusted with power.

“It was a royal take down on politicians, a sign that the royal patience is running thin. “What he said is relevant beyond Perak. He was telling the politicians to stop their political games. Their feet should be on the ground, not up in the clouds, ” Ivanpal.

The storm has passed but things are unlikely to be the same again between the two parties although Hamzah, who is also Bersatu secretary-general, is pressing for a grand coalition to be inked by Bersatu, Barisan Nasional and GPS.

Muhyiddin has not made a single public comment about Perak and there is a good reason for it. He needs to rein in the Perak upheaval as a state issue and to contain it from spilling over to affect party relations in other states

The seasoned politician understands that the clash in Perak is symptomatic of a bigger problem that has implications on Putrajaya.

His priority is to prevent another clash and to stay the course until it is safe to call for a general election.

He has the numbers again? 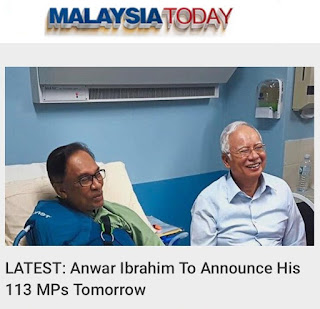 RPK, who has since slide to Tan Sri Muhyiddin Yassin and Pakatan Nasional to his old associate, Dato Seri Hamzah Zainuddin, publiched his article here with the picture of Dato Najib Tun Abdul Razak viiting Anwar at the hospital. His move is justified by PAS's stance to side more to Perikatan Nasional (PN) over Muafakat Nasional (MN).

It is an open secret that PN and the pro-Muhyiddin kluster picked on Najib for mere mentioning of PKR as one of the four strategic options available to BN in the light of various insidious moves by PPBM during the height of the buzz over vote of no confidence and Anwar's claim of having the number.

It was expected of Annuar, but not Ismail.

Political pundits linked it to the subtle intention of the comfortably positioned Ismail to raise issue the issue of Deputy Prime Minister for UMNO recently but squashed by Zahid.

RPK could likely be pulling Anwar's leg for his repeated "I got the number" hype, or continuing the propaganda Najib is willing to collaborate with Anwar and DAP to topple Muhyiddin.

Nevertheless, Fahmi Fadzil has denied of any press conference scheduled for Monday. Only Annuar still hyping it up to demand those 8 MPs to deny or make poliice report. The problem is what is the number: 23 or 11 or 8?

Another possible motive behind RPK's revelation is to detract attention away from the failed attempt for a Grand Coalition.

It was mooted recently by Hamzah Zainuddin, earlier by Annuar Musa and grand design of Publika Gang which included another member of the Publika trio, PAS's Dato Takiyuddin Hassan..

Next week, there is supposed to be a meeting between BN and PN on seat division for the 15th General Election. It is expected to be heated because UMNO may insist that they have sorted out the seat arrangement with PAS in MN.

Pro-BN social media are provoking for PPBM request their seats from PAS. Apparently in the agreement with PAS, UMNO will run at all the seats UMNO MPs frogged out to PPBM. UMNO is leaving for PPBM to run at seats they genuinely won.

It is believed the plan of Hamzah and Takiyuddin is to weaken UMNO by not allowing the possibility of UMNO winning a dominant number to allow them to take leadership of the ruling coalition.

Despite the announcement by Annuar, party insiders are puzzled. He has been dropped from the committee to decide on seat allocations and has no locus standi to make such announcement.

Within UMNO, Annuar is accused as collaborating in the plan with his open defiance to defend PN, ignore the back stabbing by PPBM in Sabah, and revelation of party secret in an interview.

Among Annuar's motivation is believed to safeguard his seat at Ketereh. A combined PAS and PPBM candidate could mathematically beat him.

The grand coalition is part of the recent announcement by Muhyiddin at PPBM's Annual General Meeting for the formation of Presidential Council of all political parties aligned with the ruling government.

It was shot down by UMNO as unnecessary as it is an open and direct attempt to push aside MN. PPBM was supposed to join the MN understanding but has yet to.

Takiyuddin was furious and tweeted there a contract, thus it has to be honoured. UMNO was merely dragging its feet with excuses to revise the pledge. UMNO was pushing to register MN, but Takiyuddin side of PAS dragged their feet.

To justify his false announcement for seat negotiation between BN and PN, Annuar claimed PAS is not going with MN and there will be no registration of MN. PAS reacted and Tuan Ibrahim denied. The ulamak and Publika gang at loggerhead?

On the other hand, PAS's Terengganu Menteri Besar Dato Dr Samsuri Mokhtar is more open to show his reluctance for MN in his state. It was his statement, "There is no "abang Long" in MN" after PAS retreat in Kuala Terengganu that led to MN eventually loss its relevance.

Its the Publika trio now and even there is a slow breeze of rumour blowing of Hamzah at loggerhead with Azmin. A PAS protest is rumoured at headquarter for Tuesday.