China is a superpower and it has and will behave like any other. It will do whatever it takes to build hegemony over what it considers its area of influence, even via corrupt means. - P Gunasegaran

P Gunasegaran wrote on the new ECRL deal in The Vibes last week.

Despite no proofs and new information, he insisted the original cost to build the ECRL put together by Dato Najib was meant to skim off money to pay for 1MDB debt. Its 3 years since BN government lost the 14th General Election, but no effort to use this allegation to ensure Najib eventually end up permanently in the slammer.

Instead, PH government went back and forth with the China government and contractor to finally cancelled it. Under PN government that is developing the perception as a mutant PH 2.0, they recently announced reviving the ECRL to the original Najib plan at lower cost.

Naturally, Gunasegaran is still not happy with the recent develoment. The reduced cost is not sufficiently significant and does not protect our national interest.

Foreign Minister Dato Hishamuddin's made a recent diplomatic embarassment to both Malaysia and China in his attempt to buddy up by calling his China counterpart "taiko". It does not bring about a significant decrease in cost and China's dominance in the local rail will continue unabated.

Wang Yi did not take the "taiko" call well as it is the address given to head of an underworld organisation. It is not a perception China wish for its international relation ... yet.

China the only winner in ECRL deal – P. Gunasegaram

It is not in the economic giant's interest to put Malaysia's welfare first; that is our job 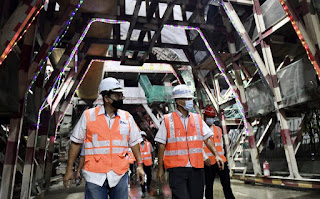 The ECRL, a deal made between the Najib regime and China costing some RM55 billion, first originated as a means to generate compensation of at least RM30 billion for Najib’s other creation, 1Malaysia Development Bhd, or 1MDB, with the connivance and knowledge of the Chinese government. – Bernama pic, April 8, 2021

WHETHER it’s ECRL 1.0, 2.0, or 3.0, one thing is crystal clear: the only winner from the East Coast Rail Link project is China, which will construct a needless rail link that will take many years to break even if at all – RM 50 billion down the drain.

The entire premise of the project hinges on transhipment – cargo from Port Klang being transported to Kuantan and in the opposite direction via rail, shortening the shipping route around the peninsula and saving freight costs in the trade between east and west.

Let’s remember that the ECRL, a deal made with China by former prime minister Datuk Seri Najib Razak’s regime costing some RM55 billion, first originated as a means to plug the hole of at least RM30 billion in Najib’s other creation, 1Malaysia Development Bhd, or 1MDB, with the connivance and knowledge of the Chinese government. Some history is necessary.

Najib’s government announced this deal in 2017, but it was clear that the project was not viable – the true cost of ECRL may well exceed RM100 billion, and it was clear in other ways that it was unviable as I explained in detail in this article and again here.

If we assume a required 10% rate of return on the investment of RM55 billion, then the ECRL has to generate an income, not revenue, of RM5.5 billion a year. Assuming income is even 20% of revenue, then revenue needs to be a massive RM27.5 billion! The impossible task ahead is illustrated by this: in 2019, PSA International, the operator of the main port in Singapore, had revenue of SG$4 billion (about RM12 billion) and a profit of SG$1.3 billion.

At that time, it was estimated that the ECRL was overpriced by as much as RM20 billion and this was confirmed later. Pakatan Harapan came to power in May 2018 with Tun Dr Mahathir Mohamad becoming prime minister. They promptly announced the ECRL would be scrapped, much to the delight of many Malaysians. 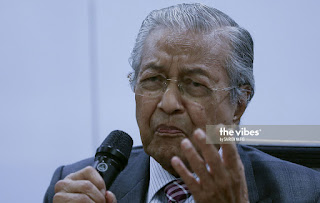 Tun Dr Mahathir Mohamad has said drawdowns on the loan for Malaysia to build the ECRL were kept abroad, adding this led to suspicions that some of the money was used to repay 1MDB debts and buy certain companies. – The Vibes file pic, April 8, 2021

But then things changed. Dr Mahathir’s crony Tun Daim Zainuddin was appointed chief negotiator with China for the rail project, which was suspended. He was earlier appointed head of the Council of Eminent Persons, which was more powerful than the PH cabinet.

About a month after PH took over in May 2018, confirmation emerged on how the ECRL deal was related to a plot to siphon money into 1MDB to close that RM30 billion hole. This was by siphoning off RM20 billion in advance payments from ECRL and nearly RM10 billion in questionable pipeline contracts, as I explained here.

As part of the deal, China agreed to provide financing for the project of up to 85% of the cost. Dr Mahathir told The Edge in an interview in May 2018 that drawdowns on the loan for Malaysia to build the ECRL were kept abroad, adding that this led to suspicions that some of the money was used to repay 1MDB debts and buy certain companies. The Edge further reported, quoting sources, that the cost of the ECRL project was inflated by around RM20 billion.

In the meantime, then finance minister Lim Guan Eng had in June 2018 confirmed that there were indications the two pipeline deals worth nearly RM10 billion were linked to 1MDB, saying that he had documents to prove that.

Despite such knowledge, Daim proudly announced a whittled down version, ECRL 2.0, which cost RM44 billion, claiming savings of RM21.5 billion in April 2019 some nine months after the ECRL was suspended. The previous cost of RM55 billion did not include a cost of RM11 billion for a link between Gombak and Port Klang, taking the cost up to RM66 billion.

Nothing changed – an unfeasible project was still going ahead at a considerable cost. No explanations were offered as to the substantial overpricing, much of the money already being transferred to China.

And despite the fact that Malaysian contract law allows a contract to be repudiated if corruption was involved in the contract, Malaysia never took that option, maintaining that compensation of RM21 million would have to be paid if the contract was terminated. It was, as I wrote then when Daim announced the deal, a cowardly, controversial, costly capitulation to China. 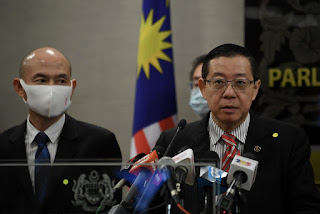 Former finance minister Lim Guan Eng has said there were indications that the two pipeline deals worth nearly RM10 billion were linked to 1MDB, alleging that he has documents to prove it. – Bernama pic, April 8, 2021

And now, there is ECRL 3.0. Basically back to the old realignment under the Najib government at a cost of RM50 billion, an increase of RM6 billion from ECRL 2.0’s RM44 billion. And the transport minister in the backdoor government swears this new alignment is the best for the country. Three governments under Barisan Nasional, PH and Perikatan Nasional could not make a proper deal for Malaysia in this lopsided transaction with China, settling for a project we do not need and having no guts to change it. How sad!

What is best for the country is that if this deal with China was never done in the first place. It was too early, needed too much traffic, was too expensive, and the existing roads are serving the east coast states well. A rail network could have been done for a lot less at a more opportune time.

We know why Najib did it – he wanted to cover the hole in 1MDB. We know why PH wanted to cancel it, but it did not when it had the opportunity, and whittled it down but offered no explanations of key controversies. Why? Now, the backdoor government has increased the cost by RM6 billion. 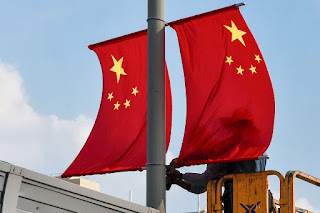 China as an economic superpower has and will behave like any other, doing whatever it takes to build hegemony over what it considers its area of influence, even via corrupt means. – AFP pic, April 8, 2021

The one entity that still benefits from all these is China – it still gets paid for building a rail network expensively despite attempting to prop up the previous government through corrupt, devious means, for which it should have been punished.

China is a superpower and it has and will behave like any other. It will do whatever it takes to build hegemony over what it considers its area of influence, even via corrupt means. It’s up to us – all Malaysians – to put the welfare of our country and Malaysians collectively above all else. It’s not in China’s interest to do so.

What’s clear is that three successive leaderships have all let us down, not just in the ECRL deals, but in corrupt, lacklustre, unimaginative, underhanded, and dishonest deals in almost every sphere of endeavour.

P. Gunasegaram has analysed, commented upon, and written on hundreds of deals in Malaysia in over four decades as a financial journalist and investment analyst. He knows a bad deal when he sees one – and this is as bad and despicable as it gets

Go to The Vibes here for the various links in the article.