Destini MRO: Why only shopping for companies now? 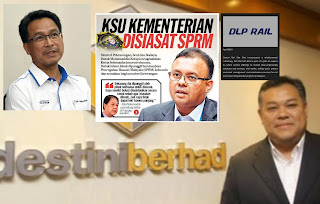 Since this blog's March 14th posting, "Railway union up in arms as KTMB awaits new Chairman", been pondering over the crux of the issue behind the Railwaymen Union of Malaya (RUM) concern or more precisely opposition to KTMB's MRO Joint Venture with Destini Berhad.
After a while, it was noticeable that the only significant media coverage was by Edge Online's Destini's JV announcement with KTMB in late February. The other being Union's reaction few days later to  oppose and call for MACC investigation.
No other media coverage and public discussion of the deal. Most glaring, but unnoticed by media, is the absence of announcement from KTMB or any media coverage from KTMB's side on the 70:30 JV favouring Destini.
It was neither mentioned in the poorly updated News section of KTMB website here nor Ministry of Transport website here. All silent .... none in their press release or announcement, and not even on their social media.
Strange, truly strange.
Keeping quiet? 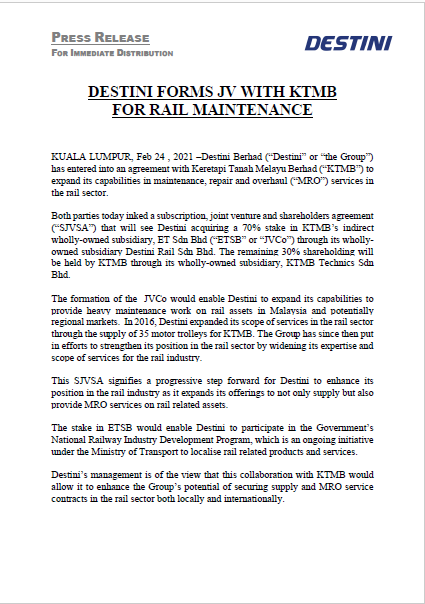 The coverage for a significant development in Malaysian railway development is only based on Destini's press release. 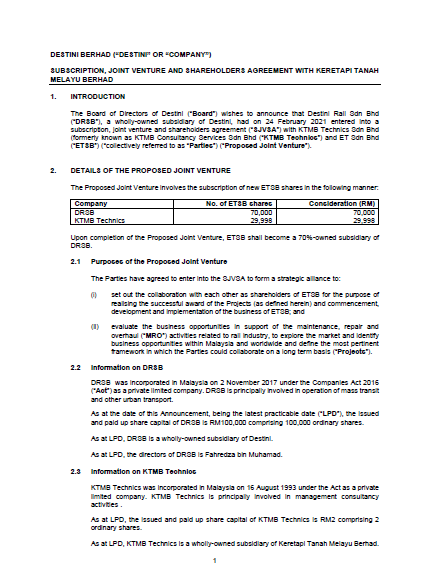 And, the required statutory announcement to Bursa Malaysia which basically say nothing more than the press release and news.
The fact that there is a Bursa announcement means it is genuine and Destini did not made up the deal. It implies the Union has something to complain about.
The hush hush by KTMB and MoT is a lead that it is intentionally intended to be out of the public radar.
Why Destini not gone to town with it? 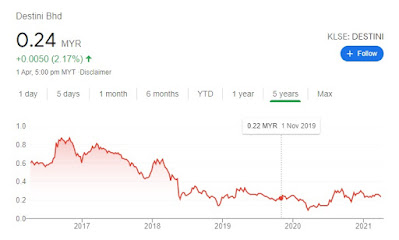 One would have thought a JV of significant corporate move by KTMB should be given wide coverage.
For Destini, which is in a financical mess and its shares languishing as penny stocks, they would want to revive market confidence towards the company with this potentially substantial corporate venture. 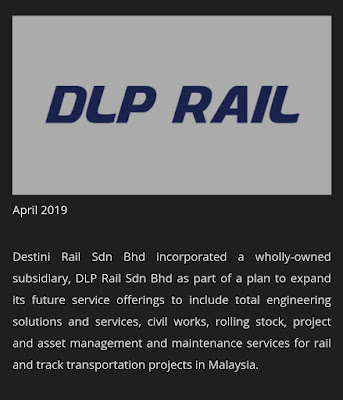 For Destini to have secured a significant deal after having incorporated DLP Rail in April 2019 in the midst of PH ruling the government, the UMNO politician backed company with strong link to PN government and access to Prime Minister should be boosting their Midas touch. 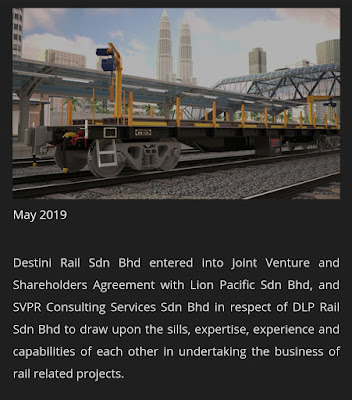 Destini should have a story to tell.
There is the story of Destini's collaboration in their JV with Lion Pacific Sdn Bhd and SVPR Consulting Services Sdn Bhd.
Lion and Pacific is in the rail track construction. SVPR have no website but the news in 2019 is only they will bid for contract together.
Unless the consultant firm is for a "specific and unique" role, an intelligent and non-prejudicial guess would be SVPR assist in contract documentation in the area of rail work in which Destini has next to no expertise and experience.
They could add the single track record of the 2016 contract to their story. It is not as exciting as helicopter contract but a story need be told.
KTMB have a story to tell after too much negative publicity from Union. There is a new significant development in KTMB operationally.
Why then the silence by both Destini and more so KTMB?
Does it mean Destini is just a politically linked Melayu company, whose capability is buddy buddy with politicians with position in government to secure contract for some bone soup, but merely an Ali Baba company for other party doing real work to benefit the meat?
Still on the issue of silence, would it be then that Destini cannot talk more than the statutory reporting to Bursa yet for fear they would prematurely be subjected to media and analyst scrutiny?
Destini has no capability?
A PLC such as Destini should be boasting on the prospect of their company and any significant achievevment to get their share prices up again but they did not.
On guess is Destini's rail endeavour is still a work-in-progress and prematurely talking too much open the company to the embarassment of parading an Emperor with no cloth on.
A source claimed that since securing the MRO JV, Destini people been visiting rail companies. This raise the possibility there will be more collaborative JVs and the likelihood for the takeover of existing rail companies.
Malaysia Boleh have few local railway contractors and train builders. In the posting, "KTM rail contracts on silver platter for China", few were enlisted.
Apparently Destini people have visited at least three such companies and boasting their closeness with KSU, Minister, and access to the Prime Minister. It is likely they met Scomi Rail former management and visited its facilities currently placed under Official Assignee.
Destini could be playing the usual rent seeking role of companies with political connection and more so, one in a financial mess. They could be a plan to consolidate the local rail contractors into a monopoly or duopoly with them as the main local player. Hopefully, it could take them out of the rut.
The biggest concern is why they were brought in as KTMB majority JV partner when they are financially in a mess and have no technical capability?
Seriously, why is the same old shit from the past still happening under PN government?
Shouldn't companies with the merit and track record be awarded the MRO deal or given the mandate to spearhead the consolidation instead?
Is there no MRO proposal at all coming from any local companies?
Are KTMB and MoT in on this? 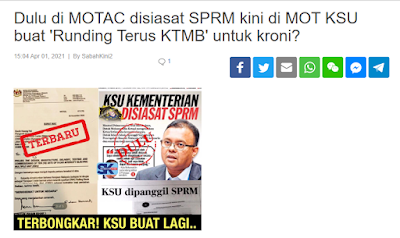 Whether they are in on this, more information is needed. When there is insufficient lead, one start by profiling the personalities.
Off course, there is the strange reappointment of the questionable KTMB CEO Rani Shamsuddin. Talk is he tend to suck up and obey blindly to anything coming from above. He has neither guts nor glory.
Then there is the latest expose overnight on the KSU of MoT in the infamous whistleblower website Sabahkini2 here.
There are documents showing that not only there was no open tender, the KSU invited CRRC for proposal in which local contractors and train builders are ignored!
Apparently Dato Isham Ishak has a bad track record at MITI and subsequently Ministry of Tourism and Culture (MOTAC). He was investigated by MACC and likely the PTD connection got him off the hook. Sabahkini2 have long been pursuing him.
For the time being, the Minister should not to be blamed.
The Union members may not be highly educated and sufficiently able to articulate their concern precisely.
However, never underestimate the feedback and hunch of the common workers.
They may have knowledge of happening at the operational level that is beyond the knowledge of the bosses and those in the corridor of power.
In these day and age of openness, the akarumbi (grassroot or those hands-on) voices should be heard and look into.
* Edited and updated: 3/4 9.00 AM
at 4/02/2021 09:59:00 AM