After grappling with Covid 19 pandemic, Riyadh season 2021 finally commenced on Oct 20th 2021 with a concert extravaganza.

This was part of the plan announced in 2017 by Crown Prince Muhammad bin Salman to turn a section on the edge of the capital Riyadh into a city of entertainment which offer cultural, sporting and entertainment activities.

It is the Crown Prince's Vision 2030 masterplan to diversify the economy and reduce their dependence on oil.

There have been many events organised since and it is not the first time a concert extravaganza held.

This concert featured Pitbull, a Cuban American rapper remembered for a vulgar act on stage with Jennifer Lopez. The Riyadh season openner went viral and was widely discussed on You Tube, social media and websites.

The westerners viewed it as "progress" and opening up of Saudi mindset from their strict and conservative Islamic practices. 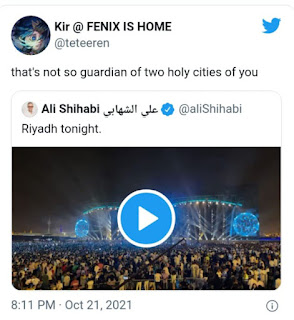 Muslims scorned at the sight of the guardian of the two holy cities of Islam allowing a Western concert deemed as decadent performed in Saudi Arabia.

In the past, it is sacriligious for men and women to mix freely in public, and more so dancing together. It is viewed to lead the next generation of Saudi Muslims astray.

To local Muslims, it is strange to see Arab men dancing in jubah, the garb Haj returnee would wear for prayers in surau and masjid.

There are those not shocked by it. They claimed the strict conduct is only confined to the holy land of Haramain, and limited to Mekah and Madinah.

Riyadh is a different part of the country and the event is viewed in the wider Arab cultural context, i.e. its normal Arab behaviour.

A recent Malaysian returnee from Riyadh said there have been concerts organised in Riyadh since 2019 and festivals are commonly organised in Jeddah.

The free hair are not Muslims, as she explained that non-Muslims Arab are commonly found in Riyadh. Her colleagues at work are from South Africa and Phillipines.

There are defensive Wahabi and apologist Muslims, including ustaz arguing out of context to preach not be judgemental. Ustaz should be honest, truthful, and clear on the right and wrong

It is left to each of Muslims to make their own conclusion. 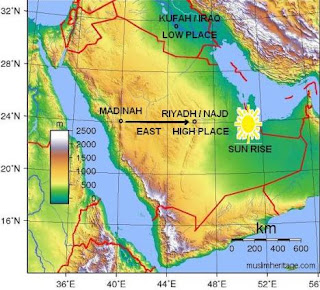 One need to be aware of a Hadith on the region of Najd (in which lies modern day Riyadh):

People said, “Our Najd as well.”

They said again, “Our Najd as well.”

On that the Prophet ﷺ said, “There will appear earthquakes and afflictions, and from there will come out the side of the head of Satan.”

From the above Hadith, it can be literally deduced that Najd was deprived prayers from the holy Prophet. It has the seal of misery and misfortune as neither blessed nor a good place but one of Fitna and Evil.

To understand Najd geographically, an extract of the work of this blogger here, as below: 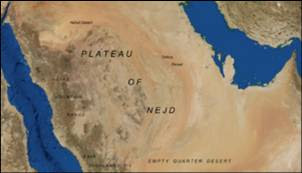 Muslim geographers spent a great amount of time deciding the exact boundaries between Hejaz and Nejd in particular, but generally set the western boundaries of Nejd to be wherever the western mountain ranges and lava beds began to slope eastwards, and set the eastern boundaries of Nejd at the narrow strip of red sand dunes known as the Ad-Dahna Desert, some 100 km (62 mi) east of modern-day Riyadh. The southern border of Nejd has always been set at the large sea of sand dunes known today as Rub' al Khali (the Empty Quarter), while the southwestern boundaries are marked by the valleys of Wadi Ranyah, Wadi Bisha, and Wadi Tathlith.

The geography of Najd is rocky plateau. It is bordered by the mountains of Hijaz in the south-west; Jordan and Iraq in the north; the Saudi coast of the Persian Gulf known as al-Hasa in the east; and the empty quarter of the Arabian peninsula, Rub al-Khali, in the south.

Najd is politically the heartland of modern Saudi Arabia, as it was from here that the Saud family conquered the rest of the regions now making up the country. 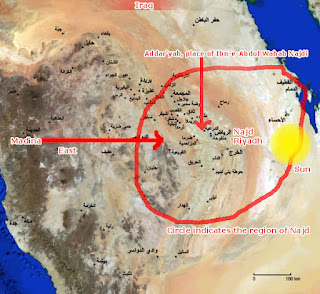 1745: With the rise of the Wahhabi movement, large parts of the region come under the joint rule of the Saud family.

1824: Saudi control over Riyadh is reestablished.

1891: The Rashidi family drives the Sauds out of Riyadh with the help of the Ottoman Empire.

1902: Ibn Saud conquers Riyadh with an army of 200 men, and expells the Rashidi dynasty.

1932: After years of conquest, Saudi Arabia is declared a kingdom. Riyadh becomes the new capital.

Muslim eschatologist, Sheikh Imran Hossein explained the Prophecy in the Hadith of Najd in the animated video by Practical Islam:

Other hadith providing further description on the horn of Satan at Najd can be found in this facebook here in Malay translation.

In another video here, Sheikh Imran is more explicit to blame it on the Wahhabi rulers of Saudi Arabia.

Shykh Albani refuted the claim Najd refers to Saudi Arabia and is of the opinion it is Iraq.

Assim Al Hakim interpreted Najd as area of higher elevation which could be in Saudi Arabia or Iraq.

On the view that Najd is in Saudi Arabia and associated with Salafism/Wahabism, Assim said the calamities and fitan is not associated with place or people. He claimed such were committed by Khawarij, Muktazilah etc.

He defended Wahabism by arguing it is not the introduction of a new faith (akidah). And Salafi promote reversion to the Quran and Sunnah, not a deviant as Syiah and extreme Sunni.

No explanation on the Hadith of Najd but only the defense of Wahabism.

A lengthy essay here by Sunni Defense League opened with the claim that "not one of the great muhaddiths, mufassirs, grammarians, historians, or legists of Islam has emerged from the region known as Najd".

The debate will continue. 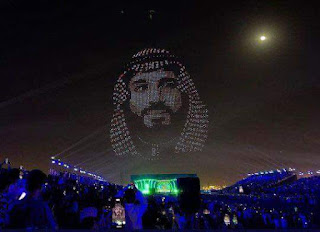 Any association of Muhammad Bin Salman with Wahabism may be incorrect.

Saudi religous establishment express their concern but he ignored them and seeking to reform the strict Wahabi practices.

Generally to most Muslims abiding to the daily obligations and applying Islamic value in their life, it is unthinkable for such concert to have taken place in Saudi Arabia.

It is one of the signs of the end of time.

Apparently, Muhammad bin Salman has a close friend in Malaysia.

Who his best friend