Is Sheryll, MI and Kalimullah salvaging the Limbang issue situation for Pak Lah? 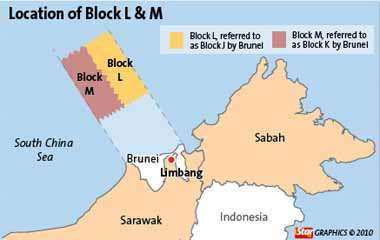 The bomb released by Tun Dr Mahathir on the Limbang should be frontpage news but the news editor are still restraining themselves. Perhaps, they are poking for more information on the Agreement.

Pak Lah has issued a statement yesterday. It was dessiminated through Bernama, The Star and intrestingly, The Malaysian Insiders. TV3 was the TV that broadcasted Pak Lah's denial. Dato Farid Redhuan is still there. He has not left the station.

In brief he is said, the block L and M has nothing to do with settling the Limbang issue. Instead, Malaysia had acknowledged that block L and M is part of Brunei's Economic Exclusive Zone. Malaysia would be part of a commercial arrangement or an agreed joint development of the block. He further explained that before signing the Exchange of Letter with the Sultan of Brunei dated March 16 2009, he had received the Cabinet approval on February 2009.

The Malaysian Insider reported here that the letter basically agreed to the principle of drawing the land and sea boundary between Brunei and Sarawak.

There is still something mysterious about the statement.

Coming from The Malaysian Insiders, Pak Lah statement has opposition backing Kalimullah's spin written all over. Furthermore, why is it opposition politician Sheryll Stothard still holed up in Petronas Tower this morning?

Sources said that Dato Shamsul had received a call from Dato Najib in which he was instructed to resolve Sheryll's issue. In not so many words, Dato Shamsul should understand that the tone in Najib's voice means get rid of her.

Was the message lost in translation? Because as at 9:30 am this morning, Anwar's spy-cum-mole, Sheryll Stothard was in Tower 1 Petronas preparing on the Press Release at the Corporate Comminication office on the Limbang issue.

Equally alarming is that The Malaysian Insider had pressed them earlier for a press release before it is written. How the hell did MI knows of Petronas releasing a press release?

Comparing MI's report with that of other media on Pak Lah's press release yesterday, it is noticably more detailed including a map with the Brunei Exclusive Economic zone drawn on it. (See below) 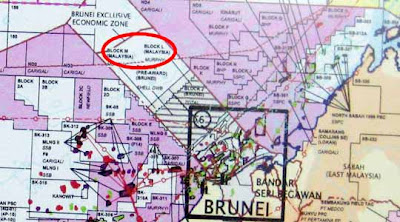 MI getting a map that has the oil blocks shows they got it from within Petronas and it shows preferential treatment over other mainstream media.

However, there is something strange about the map.

If it is written as Block L and M with Malaysia written in the bracket, why was the Brunei Exclusive Zone line drawn? Brunei called the two Block as Block J and K. The new identification is CA1 and CA2.

Malaysia has all along claimed that historically both block falls within our boundary. That explains for the reason Petronas pursued exploration there with Murphy Oil. Drilling had commenced since 2003.

And, Pak Lah claimed that the Limbang issued was settled back in March last year but was denied two days later by Brunei. Since Pak Lah's Agreement gave in to giveaway the two blocks to Brunei, how can he deny that the two blocks were not given away in exchange for dropping claim on Limbang.

The Petronas statement was clearly seen to substantiate the message that Malaysia did not lose out in the US$100 billion oil field because now we are "sharing" with Brunei.

How can he say we did not lose out when before our idiot mantan sign away the oil fields? The oil field that is historically justified as within our boundary for us to commence exploration and production is wholly ours for the take. Now we have to share!

The second mystery is why Petronas is invited if a mutually agreed arrangement already made or as The Star described as joint development? One wonders what are the Malaysian companies securing contracts now that the main contractor is not Petronas but a Brunei-French company?

Knowing Pak Lah's extensive practise of nepotism and cronyism, one can suspect that Scomi or some newly incorporated companies of Kalimullah's can have access to such contracts without having to go via Petronas for disclosure.

If so, isn't that smart?

Another backdoor method to secure Petronas via giving away our territory. If indeed so, Scomi and Pak Lah's cronies will be comfortable for the next 40 years. Khairy will have sufficient fund to defend his post, in case he has to defend against Ezam.

If true, it is a treacherous act of sacrificing our national boundary in exchange for personal wealth.

In case someone is saying, A Voice is being paranoid to accuse Dato Shamsul of defying Najib's instruction, see this extract from here below:

“Petronas has set up a team that has begun negotiations with Brunei to work out the terms for this commercial arrangement. Both parties are committed to arriving at a mutually beneficial arrangement as soon as possible,” said the unsigned statement issued by the Corporate Communications Department.

If Sheryll is still legally allowed there, she would be putting her name in that press release. Now that her presence is an issue, the statement is left unsigned.

This is dangerous. Petronas is compromising security and sharing official secrets with an "enemy".

Hen pecked Dato Shamsul has actually put up a smoke screen but have not sacked Sheryll. Does he not realised that not only Sheryll but her family member's involvement in activities that could jeopardise Petronas interest? Her latest colloboration with Kalimullah is not conducive to Petronas.

We await a statement from Dato Shamsul to state his position. Otherwise, he may have to go.

One word: Treason. We know what the punishment for treason is. It's definitely not just a slap on the wrist.

Funny why the block was renamed as
J and K...sounds very familiar.

When issues involve dollah, PR will keep quiet and the spinner will spin faster.

What Pak Lah did is treason- If he did it for SCOMI/SIL/Kali he must be punished and stripped off all his titles and pensions.This is unforgivable!!But Im inclined to believe that Pak Lah is naive, a simpleton who is easily led and taken advantage of by others.He slumbers his way to those uncharted waters the result of which the nation is being made to pay dearly now.

Sir
The government can do nothing to TH Kalimullah Hassan. Even Mahathir and Najib are wasting their time. By right Kali should be arrested for being 'jutawan jalan belakang'.

I posted the following at APANAMA but its comments are moderated so here it is again:

When I first read your post on Thursday, it kinda felt that the pro-Mahathir bloggers who were in favor of Hassan were taking their revenge.

My UMNO taikors asked me about Sheryl too. Told them she typical yuppie crowd - young and opinionated but she's just a working stiff like everyone else. Told them she more linked with KJ than Anwar. They say, "Hmmm, she small fry... focus on the bigger fish."

Yesterday morning's post suggest there was more to it. It was only on the plane back to KL did I read Petronas new appointment of directors. I supposed, it is all related.

I hate to see UMNO bloggers going to war on this issue when their priorities are supposed to be on Kali, NMY and their cronies.

I mean if you wanna bring Sheryl's political affiliation as an issue (and she is only a mere GM), what about Dato Anuar? PAS sympathizer or Dato Wan Zul? A staunch PKR supporter? Both of them are senior VPs and were candidates for the CEO's job.

Or is it cuz Sheryl is in PR and you guys are all in the same industry. The PR department in Petronas is over 140 strong. Beats me why, PETRONAS (or should I say, Hassan) needed so many.

So maybe your counterparts in PETRONAS are worried about their future.

But whatever the reasons, I wonder how you and Big Dog get suckered into all these.

But hey, less not use race in a negative context. Let us be proud that Malaysia had a non-Malay CEO for PETRONAS for 15 years. That'll shut up LKS or Kapal Singh for a while.

Voicey,it is not surprising if Pak Lah and his gang including Nor Yakob SOLD MALAYSIA OUT.They are so RICH because they would have cut a BIG MONEY deal to benefit themselves by giving the 2 blocks away.Inilah kerja KAKI RASUAH YANG BUAT KERJA TIPU. Do not be surprise if PETRONAS will be the next PERTAMINA as this is only the tip of the iceberg.In all fairness,Tun M wanted to sell LIMBANG to Brunei in the eighties but he stopped after being exposed by the Far Eastern Economic Review.

This is how an unemployed youth can amass so much wealth!

So now we know why Pak Lah was trying to extend his resignation. He needed the time to secure this deal for scomi bypassing petronas. Smart?

As a personality, I doubt that Badawi could have personally been responsible for this, ie as someone who actively championed for this decision. He was a weak PM who must have accepted strong lobbying from someone in Petronas, or someone else with a significant stake in the matter. Less focus on Pak Lah, more on those who get his time. You're not going to get far if you harass him.