Nazri and Wisma Putra only raised more questions than answers 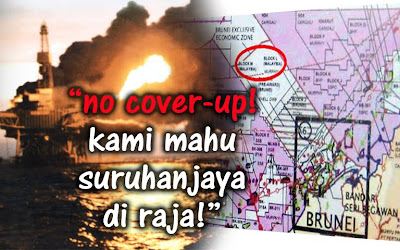 The Unspinners, a fast growing new newsbreaker, aggregator and expose blog with huge followings, agreed to the idea of a Royal Commission. In their comment, Dato Najib should heed the advise for several reasons, below:

The notably obvious is that when Tun Dr Mahathir made the revelation, the mainstream media tries to hush hush by sweeping it to the 4th page. Wisma Putra's statement which only adds more question was given frontpage coverage.

In Utusan dated May 2nd, Nazri said Government is not stupid to negotiate to lose. During Pak Lah's time, the Government was not stupid. It is far from stupid but plain dumb to the point of being ridiculous. Do you wanna begin to list the loss the nation had to endure under Abdullah Bodowi, Nazri? How about Pulau Batu Putih to help you recover from amnesia?

Please do not attempt to confuse the issue and insult the public intelligence by making a stupid remark to say we did not lose Limbang. For heaven sake, the nation lost Block L & M with the US$100 billion oil reserve. The oil field which is now called Block K & J by Brunei is no joint development but Petronas have to apply to Brunei-Tootal as Contractor?

One wonders if this is another of Pak Lah's typical decision made by Khairy during his daytime sedation? 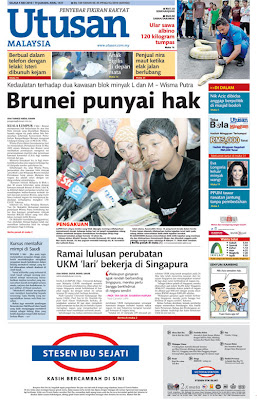 With regard to Wisma Putra report, forget about reading it in entirety. If you need to, read in Utusan Malaysia here or The Star frontpage below:

PETALING JAYA: Brunei has sovereignty over the two oil-rich petroleum blocks which Malaysia had earlier claimed ownership to according to international law, Malaysia’s Foreign Ministry said.

A statement issued by Wisma Putra said Brunei was entitled to exercise sovereign rights over the area under the UN Convention of the Law of the Sea (Unclos) 1982.

It said Malaysia acknowledged Brunei’s sovereign rights over the area in the Exchange of Letters signed by the two countries, undertaken by then Prime Minister Tun Abdullah Ahmad Badawi and the Sultan of Brunei Sultan Hassanal Bolkiah.

“Malaysia’s oil concession Blocks L and M, which coincided with Brunei’s Blocks J and K, are recognised under the Exchange of Letters as being situated within Brunei’s maritime areas and over which Brunei is entitled to exercise sovereign rights under Unclos,” it said yesterday.

The ministry said the Government terminated the production-sharing contracts over the two blocks to Petronas Carigali Sdn Bhd and Murphy Oil, which were awarded in 2003 as a result of the 2009 Letters of Exchange.

The letters also provided for the establishment of a commercial arrangement area for oil and gas, where Petronas may join in the exploitation of resources. The ministry said the 2009 Exchange of Letters was the culmination of 20 years of tough negotiations between the two countries.

It said the contents of the Exchange of Letters had been approved by the Malaysian Cabinet, and on which the state governments of Sabah and Sarawak had been briefed and consulted.

Besides solving the issue of the two countries’ overlapping claim over the stretch of the South China Sea and the establishment of the joint commercial arrangements to exploit oil and gas in the area, the 2009 agreement also provided for the final delimitation of maritime and land boundaries between Brunei and Malaysia.

Without pouring over the content of the report, did anyone realised that Wisma Putra is speaking on behalf of the Brunei Government?

If Unclos is dated 1982, are we so dumb not to take that into consideration when we pursue for exploration in 2003? Didn't we had a near skirmishes with the Brunei Navy and later resolved the oil field issue some time back? Why give it away?

The fact that Pak Lah had left for Brunei is adding more curiosity. But let's leave at that for the time being.

It just proves that any attempt to cover up by revealing only part of the information will only uncover more. Have a Royal Commission. Even the sovereign need to know too!
at 5/04/2010 12:49:00 PM

Well said bro! Yeah so many question is popping out now, i wonder what else did that sleepy head giveaway kan?

Bro, in regards to Blocks L and M, maybe the best person to explain who has sovereignty over the Blocks in question is the Attorney General. Wisma Putra just announce today (4/5/2010) that Brunei was entitled to exercise sovereign rights over the area under the UN Convention of the Law of the Sea (Unclos) 1982. Says a lot about their PR or the lack of it when they do not explain in detail with proper charts to show why under UNCLOS, Blocks L & M is not in Malaysian waters(Exclusive Economic Zone EEZ)

As it is Blocks L and M may not be under Malaysia EEZ after all and the Government have actually not given away land that is truly ours under the UNCLOS convention.

I hope the AG with the help of the TLDM Hydrographic/Mapping unit will be able to clearly shed some light on this matter to the public. Certainly Abdullah Badawi and Wisma Putra cannot do it properly.

"It said the contents of the Exchange of Letters had been approved by the Malaysian Cabinet, and on which the state governments of Sabah and Sarawak had been briefed and consulted."

Can a constitutional expert comment on the legality of the Exchange of Letters without the ratification of Parliament (why not a Treaty or Agreement?) which resulted in Malaysia surrendering its soveregnity over Block L & M ?

Bro out of topic but very current

read all about it at
http://marahku.blogspot.com/2010/05/is-police-investigation-in-aminur.html