Are Brit-educated Che Khalib and AG and MCMC offices too 'bodoh' and insular to understand satire? 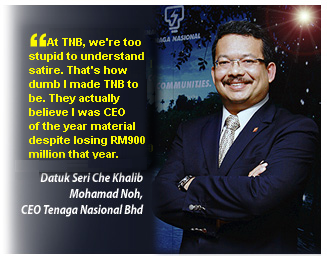 Hasan Skodeng - a blogger I just heard off and got to know he is Irwan, the Executive Editor of The Malay Mail - will be charged in court Thursday morning for writing a satire in his blog Nose4news.

Anyone with any ounce of intelligence would notice that the blog header indicate it is not a serious blog. Immediately upon reading any of it's postings, one can sense Nose4news is a satire blog, just like Husin Lempoyang.

Yes, let me admit that Husin Lempoyang is mine. It is for that not so serious moments. Go ahead Monsterball, go after me if you are still around!

Maybe these uncultured humourless accountant Che Khalib, lawyers at the Attorney General (ultimately he approves the lawsuit) office, and techies at MCMC need education on the fine art of satire.

Wikipedia define satire as below:

Satire is primarily a literary genre or form, although in practice it can also be found in the graphic and performing arts. In satire, vices, follies, abuses, and shortcomings are held up to ridicule, ideally with the intent of shaming individuals, and society itself, into improvement. Although satire is usually meant to be funny, its greater purpose is constructive social criticism, using wit as a weapon.

A common feature of satire is strong irony or sarcasm — "in satire, irony is militant" — but parody, burlesque, exaggeration, juxtaposition, comparison, analogy, and double entendre are all frequently used in satirical speech and writing. This "militant" irony or sarcasm often professes to approve (or at least accept as natural) the very things the satirist wishes to attack.

Satire is nowadays found in many artistic forms of expression, including literature, plays, commentary, and media such as lyrics.

In short, the second paragraph describe satirical pieces as untrue and non existent event. Only idiots like Che Khalib, MCMC and Attorney General would actually sue Hasan Skodeng for an untrue and non-existent fiction?

If this continue, they deserve to be made a laughing stock of the literary and IT world, and the world generally.

Che Khalib went to Britain to study accountancy. Don't tell us all he did in the UK was study, study and study, without watching any TV or read books and novels. Britain is known for their satire and sindir.

If these accountants, lawyers, and techies are too typically insular, the least they should at least have seen TV cartoonslike The Simpsons and South Park, or British TV comedies Yes Ministers, and Yes, Prime Ministers, Mr Bean and Monthy Pythons.

Satires are less hurtful to deliver a critique than an outrightcall as dumb of one TNB CEO accepting the award for 2008's best CEO of the year with his company losing RM900 million that year?

Did Hasan Skodeng actually went beyond board on his satire? Below is the posting in dispute:

KUALA LUMPUR — Tenaga Nasional Berhad (TNB), Malaysia’s premier energy provider today announced that they were taking legal action against the World Wildlife Foundation (WWF) for organising the Earth Hour, a global movement that makes a stand against climate change by turning off all non-essential lights and electrical equipment for an hour every year.

In a Press conference, TNB president and CEO Dato’ Sri Che Khalib Mohd Noh said that the annual worldwide symbolic gesture, which this year would be observed this Saturday at 8.30pm, is nothing more than an ‘arrogant and thoughtless viral movement’ aimed to hurt power companies such as TNB.

CHE KHALIB: These people are inconsiderate. “Obviously these green-minded fellows think they’re really cute, organising such an irresponsible campaign,” said Che Khalib angrily. “They say ‘turn off your lights for an hour’ and people do. I bet that really makes them feel all powerful.

“What these western colonialists fail to grasp is how such drastic action affects the poor companies like us. One hour of unused electricity means an hour of wastage for TNB. Did you know that last year’s Earth Hour costed us millions in unrealised revenue?” asked Che Khalib, seething.

“How do you think that affected our production? We couldn’t exactly turn off our power plants just because a large number of Malaysians turn off their lights at the same time. So imagine all that wasted energy.

“This year, we expect even more people to fall for this global con-job,” added Che Khalib.

“So there’ll be more lights turned off. KL alone would be engulfed in darkness. Yes, sure, it may seem fun to some, running around in complete darkness. But that also means TNB would get less money. Tell me, what am I supposed to say to the kids of this electrical technician when we can’t give bonus this year?” asked Che Khalib, as he pointed to a TNB staff manning the lights for the Press conference.

He added, “In light of such inconsiderate actions by these tree huggers, TNB has no choice but to take legal action against the Earth Hour organisers, WWF. We’ll wait for our accountants to come back with the loss figure after this year’s Earth Hour, and we plan to sue them for that same amount. We may even add a hundred million ringgit or so, to teach them a lesson.”

“We are Malaysians, and we should be proud of our lights. Every night we should go out and see the beautiful sparkling lights in our city skylines. Don’t be ashamed of the lights,” said Che Khalib, as he unveiled a set of pictures showing the Petronas Twin Towers and the surrounding buildings consequently going dark during last year’s Earth Hour.

God knows how many people tripped over things and hurt themselves in the complete darkness, not to mention the number of bad people going around doing naughty things, knowing the authorities could not see them.

“Let’s reverse the order of these pictures this year, and fight for the rights to our lights,” continued Che Khalib. “Let’s unite as 1Malaysia, and tell these green terrorists that we will not go dark! We will not switch off! Let’s tell them that we love our lights!

“POWERRR… EXTREME!” he screamed, as powerful clusters of foglamps flooded the conference room with ultra-bright and hot light, temporarily blinding everyone present, and signalling the end of the Press conference.

Omigod! This is a harmless satire which no one takes it seriously.

It is just poking fun at Che Khalib who should be concern for TNB's profitability. He is after all, 2008's CEO of the year for a RM900 million losing company. Naturally, profit and loss is constantly at the back of his mind.

It shows how driven he is to achieve profitability. Many don't think he is serious.

How is Che Khalib going to prove in court that the posting hurt his reputation? Only few knows of Hasan Skodeng's blog. Hasan can proof that his hits were minimal.

Goodness! What kind of human that cannot take a little bit of comedy? Sorry, forgot he is an accountant.

And this is just his ego talking and he is showing off his power and influence.

If he wants to be serious, fine.

Why was he taking lightly a RM200-300 odd loss for their coal ventures many years ago? If he wants to find trouble, we can start digging for more crap from inside TNB.

There is a lot of crap going-ons in TNB we can zero in, if he wants to be taken seriously and not be made a satire material. Many of TNB staff are ever willing to spill on outsiders and politicians taking on Chairman and CEO positions but screwing and screwing the organisations.

The public would love a serious answer, rather than his "satirical" reply on why he wanted to raise his salary from RM50,000 to RM100,000 when TNB is losing then? The person preparing the paper is his then CFO and now UEM CEO, Dato Izadin. There is something to pick on at UEM Land, if Izadin has no humour, stiff and arrogant.

MCMC and AG should just ignore this idiot. Maybe AG should ask MACC to dig up on Che Khalib. Believe me, there is a lot of crap.

If he wants to play rough with bloggers over such petty satire, we can play rough. We can cooperate with yours and our enemy just to pull a number on TNB. After all, we need to rid of GLC with idiots like Che Khalib.

You wrote - MCMC and AG should just ignore this idiot.

I'm more worried if AG is an ... who will charge Rakyat on petty issue and let go those ....

What the f*** che khalib. but please don't generalise the accountants coz i'm also an accountant...but with sense of humour and not the nerdy one....hahaha.

Voicey,Che Khalib not only want to double his salary,he was telling Pak Lah that he want to take over Hassan Merican place at Petronas because he was the CEO of the year for losing RM 900 million for TNB.He told his boss the corrupt Nor Yakob that he was the automatic choice for the position in Petronas.The only thing Pak Lah DID CORRECTLY during his time as PM WAS TO LEAVE PETRONAS ALONE and luckily he did not listen to Che Khalib,KJ and Nor Yakob.If not the 3 of them can BIKIN WANG BESAR KAT PETRONAS.

Yes, let's dig up the bones in TNB's closet. Let them know that speech can never be silenced.

I really am surprised that Che Khalib acted this way. I know him and his is NOT a stupid fella.

Are we sure this isn't some kind of a joke?

Yes Bro, let us expose him naked.
This is the same guy who screwed up KUB and got promoted to TNB becos he was buddy-buddy with the Top Cat.

He also hijacked the coal project from someone and make his close relatives very very rich.

loss of 900 million?
u have prove for that?
i dont think so..
the only thing i've heard is, TNB has been making a lot of money, and progress since Che Khalib became CEO.