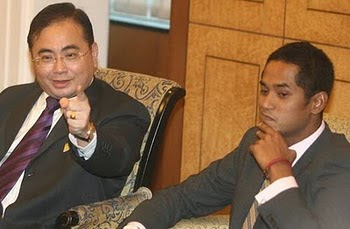 Another of Khairy's devious look. The usual pose has a tongue sticking out. But he is no Michael Jordan.
The usual suspects is all there.

The media players were New Straits Times, Berita Harian, The Star and The Malaysian Insider. The NST's (and BH) subtle propaganda against Perkasa was expected. As usual, the Malaysian Insider (MI)'s report was spinned. However, they left clues that something was not right. Furthermore there was muted publicity from Chinese newspapers.

Ku Nan's statement that Barisan Nasional had unanimously rejected Perkasa and UMNO will not support Perkasa does not jive. It is Khairy that has been leading a war against Perkasa to support stance by MCA President Dato Dr Chua Soi Lek, Youth head Dato Dr Wee Ka Siong and Gerakan leaders.

Perhaps, he is motivated by an old ex-to-grind against Dato Ibrahim Ali. However, there is someone on his payroll that connects the dots between Ku Nan and Nazri Aziz. Despite the association, it still points to Khairy as the evil devious hands driving the wedge between UMNO and Perkasa.

Again, Khairy made an intentional mistake to incite anger against UMNO. He is playing his espionage sabotage role to alienate Malay voters from UMNO.

Currently UMNO is now in a better position amongst the Malays. Since the Bukit Gantang by-election, the trend is Malay voters are moving away from PAS and PKR. Beseige with endless problems and long list of issues, the Malay majority voters lost trust with PAS and PKR.

These was discussed in both parties' weekend retreat. They realised they could not improve on their Malay voters. DAP and PKR NGO activits are not making it easier.

Indicators points to Malay support leaving Pakatan, but they are still holding back until a change in attitude by UMNO before delivering their votes. The statement of Ku Nan and Khairy's theatrics for the past few months had not endeared the Malays with UMNO.

It is crystal clear Khairy is assisting to sabotage from inside to prevent Malay voters return to UMNO. Speculation is he is waiting for former UKEC buddy, Rafizi Ramli to win the Ketua AMK position to open the passage for him to jump over. For many years, Khairy had been in touch with Azmin and their rendervous is at Azmin's Qaswa Motor at Taman Tun Dr Ismail.

For Khairy to accuse close association of UMNO with Perkasa will alienate BN from Chinese voters, it shows UMNO's incompetent Youth Head doesn't know his job.

There is no benefit to derive from playing the gallery of MCA and Gerakan. They hardly contribute to voters registration. See charts below: 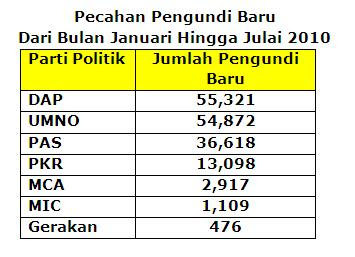 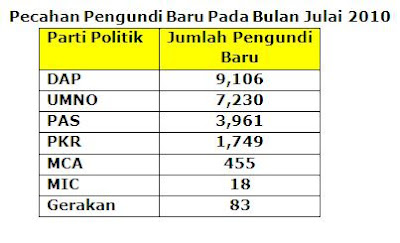 Chinese voters are leaving for DAP. MCA and Gerakan will not and do not want to deliver the Chinese votes for BN. They have not been of any help during the series of by-elections. And they are not going to work for it. Perkasa is only an excuse.

Khairy's issue with Perkasa is a personal ideological ego.

In fact, Khairy and MCA/Gerakan are helping Pakatan by infuriating Perkasa's members and sympathisers to burden the political plight of UMNO and BN.

Khairy's friendly media are also batting for the other side.

The Star is clearly taking a pro-Chinese stance and giving coverage also to DAP. This is to help ease MCA's move to Pakatan in the event it does so.

The link between Malay liberal-led NST and pro-opposition, The Malaysian Insiders with the agenda of Khairy and Pakatan has been established in this blog's earlier postings.

NST is in Kalimullah's hands and the link with The Malaysian Insiders is personal. NST has Zainur, Rashid Yusof and Syed Nadzri leading the editorial.

These are the media players that helped to blow the issue against Perkasa initiated by Khairy. They had used Ku Nan and blast it for the raya holidays.

Ku Nan was only heading the BN's Secretary General meeting. The stance made from his statement should only come out from UMNO Supreme Council Meeting or BN Council Meeting.

There were none such meetings lately.

Ku Nan is effectively trying to put words into the mouths of the UMNO President, Dato Seri Najib and Deputy President, Tan Sri Muhyiddin Yassin. Both have kept quiet to ignore.

They hoped both will not make a statement to jeorpadise relations with other 13 BN components. Both can only make statements in defense of UMNO or BN and not for Perkasa.

Few Chinese papers seems to be absence from Ku Nan's press conference and made report based on MI's report. The stories were only placed it in page 7 and 11.

Sin Chew Jit Poh, which is expected to give this story publicity, did not report it.

Other than vicious words of Nazri and Khaled, there were more words of support from UMNO leaders such as Noh Omar, Khir Toyo, and Ahmad Maslan.

Despite attempt to spin Ahmad Zahid Hamidi's words against Perkasa, TV Awani's news report shows otherwise. Zahid can be a bit of a lallang, an incompetent lallang. But lets leave him alone for now.

From our sources near PM and DPM, both had not instructed Ku Nan to take such stance. He had taken a stance with grave implication towards UMNO's "fixed deposit" of support and without any directive from Najib or Muhyiddin.

Ku Nan's statement that UMNO will not support Ibrahim Ali and Perkasa, and furthermore will place candidates in Pasir Mas, is moronic.

For that matter, did Perkasa wrote to UMNO for support? Why does the affair of an NGO raised such concern of UMNO or BN? They should focus on their work.

If BN is concerned about Perkasa, why then UMNO is not steering BN to take positions against Su Qiu, Hua Zhou, Dong Jiao Zhong, and Hindraf?

Ku Nan had been made to look foolish for being used Khairy.

Maybe he is actually in co-hort with Khairy. The typical trait of an UMNO man resisting change is when they believed they are in positions of strength, they start to behave arrogantly, vindictive and back to the usual powerplay.

He had said he believed UMNO is not weak. Is it too soon to return to the era of Abdullah Badawi and repeat the same crap?

Najib should end all these nonsense once and for all. Will he?

Najib is smart to use his reliable lieutenants to cut down Perkasa and Ibrahim Ali, indirectly Dr M. Najib reaps all the upside with zero downside. So where is the right-wing UMNO crowd going to turn? PKR or PAS?You gotta be joking... Najib knows you guys have nowhere else to go but stay put in UMNO. Come next 13GE, you guys have to pinch your nose and still pangkah UMNO-BN! So, you right wing, Mahathir loyalists are boxed-in! The knives is out for you guys. Slowly but surely...

What made you think Perkasa will pick the card it is given?

Maybe they will not pick any card.

What made KJ boys think PAS will sit and do nothing?

Najib is too docile to do anything. He will only move when TSMY makes a significant move... as last time.
Toing!

Perhaps these voices against an NGO PERKASA are the deadwood in UMNO.

If they think UMNO is not weak, why fear an NGO?

It is precisely because PERKASA is effective in voicing the Malay concerns that they begin to worry.

The Malay voice has always been silent on many issues for so long.

The fact that Perkasa was formed AFTER Su Qiu, Hua Zhou, Dong Jiao Zhong, and Hindraf should be highlighted.

It was a response to such racist demands by the non-malays.

So the non-Malays have to "twist the arms" of UMNO weak links to verbally announce the distancing of UMNO from Perkasa.

I Wont Back Down Lyrics
Artist: Tom Petty

Well I know what's right, I got just one life
in a world that keeps on pushin me around
but I'll stand my ground
...and I won't back down

Just like the leaders of the SA went down to the executions hailing 'Sieg Heil Hitler', thinking that the orders for the slaughter came without Adolf Hitler's instruction during the Nazi housecleaning in the Night of the Long Knives! So, like i said where can you guys the right-wing Mahathir loyalists go? Next GE13 WILL still pangkah UMNO-BN like good soldiers! KJ is just a convenient shadow boxing target for you guys to target while the knives are out for you Perkasa and Mahathir loyalists in the party. And there's always Ali Rustam to keep Muhyiddin in check in case he wants to do anything silly like challenge Najib. Ali Rustam with his grassroot than is far wider than Muhyiddin ever had. Najib has Perkasa, Ibrahim Ali and indirectly Dr M boxed-in thru sheer savvy of manouvres. Housecleaning is coming to UMNO! UMNO will be saved! The time of Najib is here... - Anon 3.13 ÖBoq

You know your racists comments will never get released but still insist to say your piece to me.

Such persistancy reflects the mentality of an uncultured pariah with the subtle touch of bull.

Your identity is blown. We can guess who you are.

We are left to choose either bad or worse! For instance....we look at BN...no one seems capable of leading the country to a better one! PR lacks of maturity in governing a country....better still not even a state! I reckoned BN will capture back Selangor. Penang-Dap, Kelantan-Pas, Kedah 50%/50% but I think there will be a change of wind in Sarawak! Malaysia is boleh but for all the wrong reason! If he thinks One Malaysia can save his ass...I bet he is damn wrong....1 Malaysia is already here long long time ago....just that we never cherish it and lost it! I strongly believe PR will perform better than 2008 GE....reason..bad is still better than worse!

As long as you keep your conspicuous mind looking at anything that suits your mindset and directing things that did not meet your skewed thoughts as conspiracy or utilizing conspiracy theory, you are RIGHT in whatever you wrote.

I wrote what I saw missing by other blogs and with the benefit of information.

without backing from people outside umno and some support within umno, KJ dare not say anything.

He knows his days in UMNO is will be over very soon and this is one of his one stone kills 2 birds strategy.

To ampu Najib and in case he lost his place in Umno, he is to damage Umno reputation among the Malays.

What is it with people who decides to publish lyrics (like the anonymous chap above) instead of just writing simple sentences. Do they actually think that people has time to go through their artistic crap? Perhaps they think "hey look at me, I am such a different". Yeah right /rolls eyes