Does Pak Lah know or not? 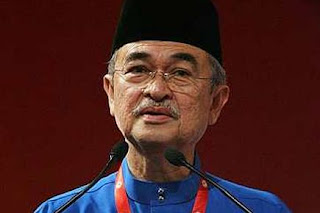 At one of the four weddings I attended yesterday, I bumped into one of the Political Secretary of former Prime Minister Tun Abdullah Ahmad Badawi.

When our conversation moved into the latest issue raised by Rocky Bru, the host popped up the question Rocky raised yesterday.

He denied and claimed if such a file reached Pak Lah, he would have seen it.

It could be a potential embarassment for him and Pak Lah because another source claimed Dato Seri Najib had seen the file.

Furthermore, a Jakarta based NGO, Migrant CARE, made a press release dated August 1st 2007 to inform the case involving Indonesian maid, Robengah is under investigation and their finding will be submitted to relevant authority.

No name of the Senior Minister was mentioned but a PAS blogger claimed it had something to do with a withdrawal a month earlier by a Senior Minister from contesting for a significant position in an International body.

The press release found on Tenaganita website here is reproduced below: 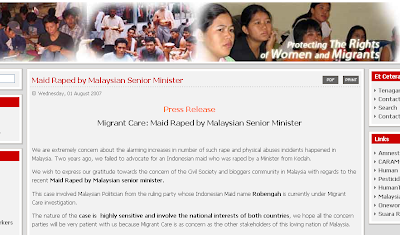 We are extremely concern about the alarming increases in number of such rape and physical abuses incidents happened in Malaysia. Two years ago, we failed to advocate for an Indonesian maid who was raped by a Minister from Kedah.

We wish to express our gratitude towards the concern of the Civil Society and bloggers community in Malaysia with regards to the recent Maid Raped by Malaysian senior minister.

This case involved Malaysian Politician from the ruling party whose Indonesian Maid name Robengah is currently under Migrant Care investigation.

The nature of the case is highly sensitive and involve the national interests of both countries, we hope all the concern parties will be very patient with us because Migrant Care is as concern as the other stakeholders of this loving nation of Malaysia.

As an NGO Migrant Care shall have no political interests to tarnish the image of the politician and political party involved, nor denying the rightful justice of the raped victim.

We cordially request the interested parties please do not create any untruthful speculations before the results of final investigation of which we will officially submit to the relevant authority for their further actions.

Failure of such, then we shall seek justice through international communities.

RELA, in their national missions, has already caused significant hatred feeling among the people in the Republic of Indonesia against Malaysia despite of very cordial diplomatic relationship at the top government to government level. The role of RELA as Indonesian undocumented migrant bounty hunter has become significant security threat to the regional security in the years to come.

It is timely that Malaysia – Indonesia think tank groups seriously study the migrant workers that impacted the social, political, economy and regional security.

We believe justice will be done in accordance to the law of Malaysia through the proper channel and positive constructive engagement with the authorities involved.

Migrant CARE did not release the name of the Minister.

Neither do we know. 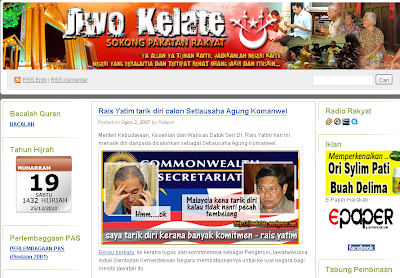 But one PAS blog, Jiwo Kelate linked the then Minister for Culture, Arts and Heritage, Datuk Seri Dr. Rais Yatim's withdrawal from nomination for the position of Secretary General to the Commonwealth to the case.

The blogger claimed Rais withdrew a month before the press release due to pressure from the Indonesian. Read it here.

Rais Yatim helped in the PKFZ scandal. This one during Pak Lah Time pun sambung lah. So Rais tolong Pak Lah, then hen Rais play 'pisang saya montel' with the maid, Pak Lah helped to cover up with the Indonesians.

Rape is a serious matter. Only despicable men that have no honour will rape a woman.

That is a crime of violence against women.

This old snoozer knew nothing !

He didn't even know he got married again!

The only thing that dolah know is he is married his maid, legally.

Even if he know, he dont know what to do and as usual will leave it to kj and kalimullah who know how to blackmail Mr X, from a small state with more warlords than Afghanistan.

To say that Rais Yatim is Mr X is a bit too much. It's an insult to his wife.

Everybody know that Maznah looks better than any bibik on TV.

Match or mismatch? Rais from Kedah?

Please blog about something more important. Enough of the attacks on Pak Lah. There's such a thing as overkill. At first it was funny but then it just gets downright mean spirited. I dont know why you guys go to so much trouble to make people hate him. Malaysians are not stupid. So-called pro Bn bloggers may hate him,but other voters may not feel the same way and they could be the majority. And now a Cabinet Minister's name is being tarnished without any solid evidence. Rape is such a hideous crime and should not be treated lightly. Please be fair especially to those you choose to attack without any proof.

Pak Lah hs made appearing blur an art form. Its really an impressive skill when u consider how it has taken him from Islamic studies background to the ultimate cat bird seat - Prime Minister of Malaysia.
This skill has variously served him well especially when deflecting serious issues. Should be interesting to see how he defends himself in respect of the Wikileaks allegation.

Are you or anyone out there paying me to blog?

Since you are not and there is no one out there, dont tell me what to blog about!

The rest of what you said is totally of no relevance to me.

What if there is a proof?

You like chilli sauce on the shoe you gonna be eating?