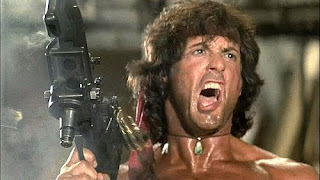 Melayu Baru blog wrote a posting claiming Khairy would be appointed Minister. With the choice of picture used, one can easily spot a cheap trick typically used by Khairy's boys to psych up the public into accepting that "eventuality."

Malaysia Instinct took up that post and parodied the posting with a headline that reads as "AYOYO: KJ Akan Dilantik Menteri Penuh."

Now, everybody knows and it will spread and backfire. The better tactic for Khairy was to lie low than use predictable tricks like this. Because the more he tries, the more revelation about him and/or Tun Dol will come out.

If you've heard of Tun Dol saving Khairy ala Saving Private Ryan, this revelation of a happening during Tun Dol's era is more revolting.

It was told to me by one corporate player. However there will be no names mentioned. But it will bring to boil the blood of every nationalist Malays.

Once there was a Malay businessman who was brought in by Tun Dr Mahathir to do a national service to salvage a National Company. Despite many pressures and slanders, he slugged through to turn the National Company around while at the same time was running his own business also.

Things were turning to fine until the currency crisis of 1998 came along. The Malay businessman actually salvage a Bank when he tookover the National Company at a dear price.

The Malay businessman couldn't save it anymore and had to sell the company. He is a proud man. He would rather persevere but it takes a deep pocket to weather the big storm.

At the same time, he has loans and borrowing with his other company. When the National Company was sold, the proceed goes to a Public Listed Holding Company.

Subsequently he was to do a restructuring exercise to pay the banks, take the money from the sales and off course the other shareholders of the Public Listed Holding Company will benefit along. His reason was to save his other company and it is public listed too.

Minister in charge used his discretionary power to reject the Malay businessman's proposal. It wasn't rejected by the Securities Commission but a Minister.

No reason was given but eventually it is known that the Minister wanted to create a big Monster and rob all others' hardwork at privatising and building companies. Through the Monster, he will amassed such power and grasp on the economy.

The Minister used a village idiot once schooled at Kuala Kangsar to head that Monster. That idiot had came in to konon-konon to turnaround and solve the National Company the Malay businessman had to sell.

Everyone thought the Minister was sincere to get the assets back with the Government. Those getting Government privatisation was depicted as villains by one of the Minister's good but queer friend.

By getting back the asset, konon-konon it will appease the people. The Minister's new boss will be popular and opposition attack and slanders will end. The new boss looks like Mr Clean.

They then can claim Monster will carryout Agenda Melayu and all those garbage about memartabatkan Melayu.

After establishing Monster, never did they bother about Agenda Melayu? So many seminars, conferences and forums talked about Monster is supposed to empower the Melayus and Bumiputeras but they don't care at all.

That is one crap. Did anyone realised that all Monster took was from Malays?

They did not take back privatised asset like YTL's IPP and all. All the Chinese and Indian hongs that build themselves from the opportunity from Dr Mahathir is still around and strong.

The Malays that Dr Mahathir built are no more around except few like Tan Sri Azman Hashim. All of them were robbed of their corporate vehicle by Minister and his Monster.

Many today lament why we keep destroying what was built with much effort and pain everytime new Prime Minister come in? But the Cina and India managed to continue to grow bigger and prosper from it.

And many realised that Malays will be without such giants to carry and provide the community with job opportunities, sub contracts and mentorship. Taukeh Cina will not help you without anything in return.

The Malay businessman was not denied because Minister wanted to create Monster. His proposal to do the restructuring exercise was rejected because he did not want to pay a blackmail.

During the time the new boss was in charge while the old boss was clearing up things build up over a long time, a young berok surfaced into the picture to approach the Malay businessman.

Berok bluntly said something like this, "We can help you but we want 30% of what is to be made."

It means the rejection can be reapplied and we can smoothen the approval process for you. The condition is berok must get paid. Otherwise, the Malay businessman will lose both his Public Listed Holding Company and the other Company.

Some say businessmen are pragmatic people and will just pay up to avoid the hustle. Not when the blackmail demanded is for RM1 billion.

The Public Listed Holding Company was robbed away by the husband of a song bird. The Malay businessman other Company was lost to Monster. The National Company has still not turned around by village idiot from Kuala Kangsar, Monster and aborigine.

The young berok will never admit. Some will say this hearsay without proof.

Maybe it didn't happen. The Malay businessman was just making things up.

Don't know why everytime the village idiot from Sekolah Melayu Kuala Kangsar and his mamak master's name was mentioned it will boil my blood.

To make it worst, everytime the young berok's name came out in the news, it will boil my telur.

Enuf la Najib. Either they go or you and Rosmah go.

There are three comments making guesses who the characters are.

Sorry ... can't release. No names are to be mention, please.

Said this before in someone else's blog comments.
The charges against the 2 doctors Ling & Toyo will be seen as the Govt's(PM's) right move in the pledge to fight corruption,ONLY if the next to be hauled up is the `berok` himself.
Anything less will not change the public perception at all.
The `berok` or the repeat of GE12 (or worse).
Take it or leave it.