The sickening debate and propaganda of Ketuanan Melayu 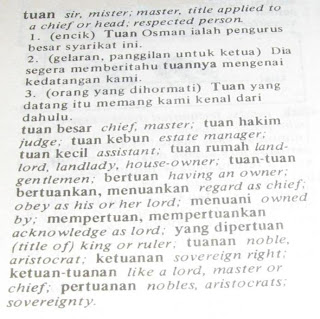 Many had personally asked why this blog did not bother to write about Ketuanan Melayu to respond to the coordinated attack by Chinese political parties and leaders.

When Ketuanan Melayu is debated, it means Social Contract, Article 153 of the Constitution, Islam, Bahasa Kebangsaan and Malay Royalty get sucked into. There should be motivation to defend it.

The reason is I have written extensively about it in this blog and elsewhere. And I bored sick to write about it. So please friends, save me those long SMSes to explain your point of view on this subject.

The reason I am bored sick is because this is a problematic discourse. It is linguistics, legal and historical, all in one. But those participating in the discourse refuse to understand it thoroughly before expressing their views. 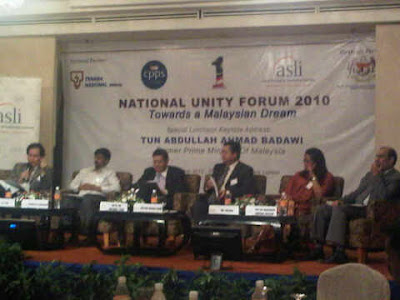 There are many sneeky ones like Koh Tsu Koon who had used his Jabatan Perpaduan to organise a Forum to discuss unity but arranged it as to bash Perkasa for their Ketuanan Melayu call. Sama-sama tak faham.

One side, particularly those so-called claiming to be Malay Nationalists, hate such extensive, technical and fair-minded discourse.

They claim we are apologist trying to politicise or being diplomatic. Be done with it and say it as it is. "They" must accept "we" are tuan rumah and we determine the course of this nation. These nutheads will not hear of any lengthy explanation.

This kind of macho attitude can be so dumb. But on the other side, there are those who refuse to accept facts.

They will not talk and delve into areas they know they are at a disadvantage. Their dishonesty goes to the point of not taking into account of the historical and cultural fact.

If they do bring history into their argument, it is the twisted version or nit picking of historical facts that is tailored to meet their political-economic objectives.

The guru in this kind of historical spinning is Professor Guang Wu.

Their argument is seldom based on foreign model and experiances for that so-called looking forward arguments. They refuse to accept the fact that all successful nation has strong roots and historical and cultural continuity with it's past.

To cut through the chase and say it out loud, the Chinese will not accept any explanation because they want to play victim to gain more political-economic ground. Full stop.

So what is there to discuss?

The Chinese (or in politically accurate word, certain segment of the Chinese or the majoirty segment) want to play act to the world that Malaysia practise apartheid. The Chinese are economically marginalised (Oh ... f**k me), they are deprived off education, basic amenities, and such, and they have been ethnically cleansed.

The Malays are to be depicted as getting everything. Only Malay, not even the Bumiputera of Sabah and Sarawak.

Malay need to be depicted in the psywar as the dominating race that victimised the Pribumi or Sabah and Sarawak natives and the orang Asli.

Pity them, because it is as though the Chinese have been the one helping out the Orang Asli, Iban, Kadazan, Bajau, etc. Their commercial class have not been exploiting and victimising them.

Why do you think the Chinese taukeh balak are not as rich as they are supposed to be?

Never mind the fact that they post up in Sabah notices openly that employment is only for Chinese. The Chinese go out of their way to help them.

It is their pocket money that pay the Ibans of Sibu RM16 for a whole days work and help them survive in which the cost of living is such that one hour one way trip to Sibu cost RM10.

In return, they want the Pribumi and Orang Asli help liquidate the BN Fixed Deposit and topple the UMNO-led Barisan Nasional Government.

They are smart. They have covered all possibilities. Off course, they are the true Malaysians. They don't think in term of race.

If BN stay and remain in power, they have positioned MCA, Gerakan and SUPP inside to be that irritating prick to demand this and demand that.

Oh no ... they do not demand for Chinese, no ... please perish such thoughts. They are thinking for all Malaysian.

This sarcasm is really a revolting one.

Why are other segments of Chinese keeping a blind eye?

Do they not think that there are now groups retaliating and advocating the idea for all Malays, Pribumis of Sabah and Sarawak, and the Orang Asli to teach them a lesson. Vote Bumiputera according the priority of UMNO-BN, Bebas, PAS and last PKR.

That should be the last any sane citizens should do i.e. to vote against any particular race, but that is happening.

It could be certainly destabilise the peace and harmony of this country. One can foresee MCA, Gerakan, and SUPP turn into the ghost of political pasts and going around jumping aimlessly like Chinese vampires in some Hong Kong ghost movies.

This is what the implication of the Chinese community-led attack through their NGOs against UMNO tantamount to. It is ganging up against Malays.

Seeing what happened in Penang, it will raise more insecurity and prejudice amongst common Malays towards bangsa asing.

It will only result in a backlash that will realise the Chinese propaganda of Ketuanan Melayu as political master and slave.

Chua Soi Lek, the vocal MCA President that usually speak out of place and context, should be glad when his premonition of Ketuanan Melayu becomes a reality.

Alas ... enough of my sarcasm and cynicism.

Screw what they say about Ketuanan Melayu because it is not a racial doctrine with a "Master and Slave" meaning.

This meaning was only expressed by Wikileak-ed Anwar Ibrahim now because he wants to be Prime Minister by riding on Chinese votes.

The Chinese have put aside moral consideration. They are willing to ride on him for what he has to offer. Somehow they believe they will not be tricked like the Indian Kampung Buah Pala villagers.

They do not care and will refuse to believe that it was Anwar that introduced Ketuanan Melayu in such manner when he took charge of Biro Tatanegara (BTN).

In his bid to transform himself from an Islamist to a Nationalist, Anwar had introduced many terms to project himself and gain acceptance as Nationalist in UMNO.

What he had done was basically perpetuate a meaning of Tuan used commonly by the British Colonials to mean Master. Tuan Raffles, Tuan Crawford, Tuan Milne, and many other names can be found extensively in Abdullah Munsyi's books.

It also commonly used in the olden days as Tuan hamba to mean sir. Today they just use Tuan.

A pointer: In case you do not know the surname of a person, whether he is a Tun, Tan Sri, Dato, Tuan Guru, Tuan Haji, or just plain Encik, call him Tuan.

Enough said on the meaning of Tuan.

Dato Nazri Aziz explanation of Ketuanan Melayu as Raja-raja Melayu is along the same line of thinking.

The sovereign rights lies with the Raja-raja Melayu. No point for DAP's Tunku Aziz to seek the use of the term as Raja-raja and not Raja-Raja Melayu.

That is what it is and no point of trying to say it is not. If his intention is diplomacy, it does not serve any purpose because Malaysia has not and never lost it's continuity from it's ancient Kerajaan Kesultanan Melayu of the past.

The British signed many treaties with the Malay Sultans, beginning with the 1874 Pangkor treaty, that acknowledge and perpetually legitimise them as the sovereign and holder of the sovereign rights.

That is why the main players in the Independent negotiation was between the royal and British. It was a legal negotiation between two parties with loci standi.

Maybe it can be described in this corporate manner. The royals were the "company shareholders" and the British were party given "management outsourcing job" by the shareholders.

The rakyat as represented by Tunku Abdul Rahman and the various groups were like union leaders who had submitted a proposal to the shareholders and management to change the outsourcing arrangement from the current management to the unions.

There was an agreed and written agreement between the shareholders and union members. That is the so-called Social Contract.

The Bar Council and those MyConsti campaigners are just wasting their time. The only way they can be successful is if they call for an armed revolutions against the King. They better be well armed. Over my dead body they will ever win!

Why waste time talking about changing something one can't change? Screw the Zaid Ibrahims, Anwar Ibrahims and Harris Ibrahims. Better to have Ibrahim Ali.

It is better to move on and work within the perspective of responsibility. Read old postings here and here.

Many citizens complain when there are royal interventions and abuses. The rakyat can't say anything without being branded as derhaka.

Ask ourselves: Is that what we want?

So why don't we move on from what we have.

Former University of Malaya History Professor, Prof Malik Munip share the views that Ketuanan Melayu can give rise to negative connotation by virtue of the adulterated meaning by the Brits.

In his view, Ketuanan Melayu is about Kesinambungan Kedaulatan Sejarah Melayu or continuity of Malay sovereign history. That sounds technical but that is what it is.

Without that continuity, we will be a nation without history, tradition and past root.

See how awkward is Singapore as an island in the Nusantara Melayu trying hard to claim this was never a Melayu land and their forefathers were British.

The more we talk the more burnt will be many hearts. But please don't over burn the emotions of those silent heroes (if the culture is understood).

How many of us are ready to play the role of a diluting factor like Another Brick (congratulations). But we have our children and grand and great and great great grand children to continue their lives here. And it is our responsibility to preserve that future for them. Full Stop.

Well that was a very good & perfect explanation. But how many of them really understand it? The reality they don't want to understand it. And they all know that they all are very advantage here in Malaysia. If not they won't stay here.

Look at where they came from, like India & China where the residential ststus not easy to achive.

I like the last para you wrote, its the true facts. It would be nice if Tengku sign a 99 years leasing agreement.

"There was an agreed and written agreement between the shareholders and union members. That is the so-called Social Contract.

Simply put, The Social Contract has been superseded by The Constitution.

Why don't these dunderhead just move with their families to Newfoundland.
It can be anybody's land as long as you have the money to buy it legally.

And the best part is there's no Ketuanan Melayu there.

Anwar's cock is in deep shit already.
Half in - half out.

It's a must pass subject you know. Like it or not.

Spot on. That's what I have been trying to explain to my non-Malay Malaysian friends about Ketuanan Melayu. i am Melayu but, funny i dont feel like a tuan as i read Ketuanan Melayu as Ketuanan Raja-Raja Melayu.

Malay position in the constitution was never been openly question as it is now when Tun M was in power.
A strong leadership play an infortant role as unifiying factor.