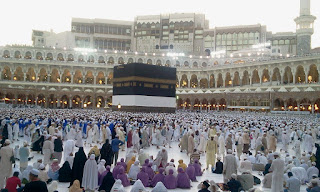 That is one poor copycat to the title of a Hollywood blockbuster, Sleepless in Seattle. Sleepless was also a copycat of An Affair to Remember.

All three of us, especially moi since Medinah, have been down with cough, since we arrived in Mecca at pre-dawn on October 19th, 10 days ago. That's one way to remember an important milestone in our life.

The fume from the bus's diesel engine during the trip continued my asthmatic coughing streak from before Ramadhan till the present. I would have worn a surgical mask if I had known that it is quite alright to wear one in ihram clothing under medical reason.

With the muscle cramps that comes with asthmatic medicine, it makes coughing painfully a little challenging. Dugaan ...

I lost the mood to blog till one Tabung Haji petugas who happen to be a Husin Lempoyang fan asked of my next posting. That reminded me that I have not been blogging since I was in Mekah.

With some of my Muasasah roomates the at Masjidil Haram and some in a briefing session by Tabung Haji, I'm alone in the room, free from distraction, to write. 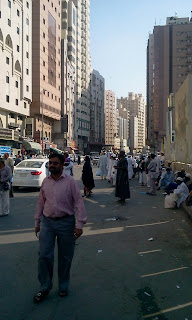 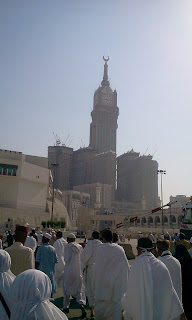 Those familiar with Haji would know that being down with cough is an inevitable thing in Mecca, especially during the Haj season. With the heat, dust and large number of people packed in, viral cough spreads like wild fire. 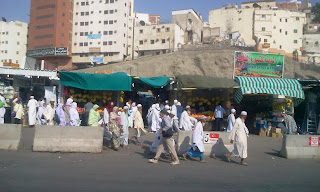 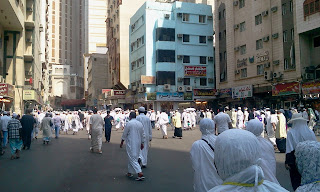 As more people are coming and packing up Mekah, the coughing has come to the point that the coughing exchanges, be it in Masjidil Haram or makeshift surau, emulates a balas pantun which ends in a chorus at the end of prayer.

Everyone seems to be down with cough.

Four out of six in my room are also down. Since they are young, the cough does not seem to stop their will from going to the Masjid, do tawaf sunnat and do umrah sunnat. Remember when you were young?

You are likely to bump into people coughing in the elevator, dining room, lobby seats, etc. Even few people with the media here are coughing albeit less serious.

In Mekah, Malaysian are assigned residential colleges or Maktab numbers 86 to 94. We were assigned to Maktab 93 which is located at Hotel Luluat At Tawheed off Ibrahim Khalil Road. It is about 1 km away from the Masjid. 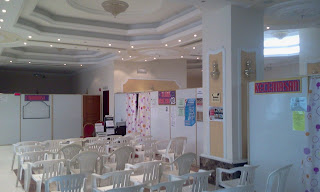 At each Maktab, Tabung Haji provides medical services. And cough seemed to be the biggest problem facing our pilgrims. One can peek through their pharmacy and see cough medicine Amydramine by the boxes. I really pity the old folks having to deal with this Mekah variety cough which cough incessantly.

I had earlier anticipated this to happen and stocked a whole plastic bag of my own flu and cough related medicine, from two types of gurgle, to three types of lozenges, and my Respirator Specialist, Dr Wahab Suparlan's prescribed cough medicine, Cough-en Rx Linctus.

I had stocked up on all my medicine and medical paraphenelia from Kuala Lumpur that I needed a dedicated travel bag for it. Lucky me, because Tabung Haji's medical clinic seemed only limited for normal ailments like fever, cough and headache.

For instance, they do not provide any anti-biotics for flu and cough sickness. I wanted a muscle relaxant but it seems painkiller Arcoxia that I brought along was beyond their budgetary means.

The best they could answer my wife's suspicion that she may be down with an asthmatic related cough is to put on a surgical mask. That is in fact good advice and I had it on when I am in public or in large crowd.

I am not putting any blame but taking it as it is. For me, their services are second to none in Mekah. It is just useful reminders for future pilgrims to be prepared medically. They are supposed to come with certain physical preparedness and address any medical issue they have.

Tabung Haji had also reminded pilgrims of this before coming.

Since Medinah, they repeatedly kept reminding us to take care of our health and to not be overzealous with ibadah sunnat. One challenge Mekah pose on pilgrims is that the heat could sap energy from you.

Our priority is to be physically and spiritually ready on the real important and physically tough Haj rituals on Zulhijjah 8-13th.

That is only next week.

We have always kept our focus for those dates and Insya Allah, with Allah's concurrence we hope to be healthy pilgrims ready to seek Allah supplication and invocation by next Friday.

Nevertheless, Tabung Haji would refer the serious cases to hospital. They have an emergency ambulance on standby at our Maktab should any pilgrims gotten worse and needs hospitalisation.

Despite the cough, it has not stopped us from doing quite a bit of activities. I'll talk about it soon.

From hereon till the beginning of the Haj journey at Arafah field, expected to be next Friday, we'll stay indoor and pray in the

hotel. And I could be a little more frequent with blogging.

We still have some 20 days after Haj to do tawafs and umrahs. Maybe it is more meaningful doing it as Hajis and Hajjahs.

Currently we are supposed to be described as 'hujjaj' but the Bangla and Indon maintenance workers, the crowd police and religous police are addressing us as Haji and Hajjah. Insya Allah.
at 10/30/2011 08:59:00 AM

A'kum. Just take care of your health, okay, cough notwithstanding. pakai the mask, it helps. my coughing lasted sampai habis haji despite all the medication. may you have the strength to face all the challenges of the pilgrimage dan semoga mendapat haji yg mabrur, insyaallah.

It can be frustrating with the cough and it wont go away easily. You are in the holy land, ask for Allah's mercy. Even the zam zan water could do wonders. It worked for me last year. Do take care of your health...your wife too...

My mom & I used to drink Pepsi/coke infused with pounded ginger. Alhamdulillah, it worked when other cough media failed.

Please don't waste your precious time writng or updating blogs.
Every ibadah is worth 100,000 times more than done anywhere else.

Setiap ibadah sunnat pun diberi ganjaran berganda2. so kejarlah rahmat Allah.
The most stupid thing to do is praying in your hotel room. Don't give any excuse like batuk, letih etc. Walk to the Mosque and pray on time with Imam. Reap the maximum benefit while you are fit now than hoping to go again in later years.Kalau nak salat dalam hotel, baik tinggal di KL .
You are in Mecca, so always remind yourself of this niat.Don't expect Haj to be a holiday in hotel with cooling air-condition.Lool at the afrikans around you ! How they move about Kabah with full energy and vibrant. Melayu kita nak semua senang..!Bayar Dam and hope to get Haj Mabrur.Go and sweat under the sun, feel the pain and pleasure of every Ibadah : sunnat and wajib. Avoid your laziness and tawakkal fully to Almighty. Don't worry about your cough and heat.Drink more water. No stroids or antibiotics. Come back after Haj and update us with photos and text. Salam

Salam. May Allah bless you with patience and health to complete your Haj next week.

Its great to hear from a fellow Maktab 93.

We are spiritual brothers. We will bear witness for each other that we have completed our rukun Islam.

Leave your handphone number. I won't publish it but Insya Allah, I'll call you.