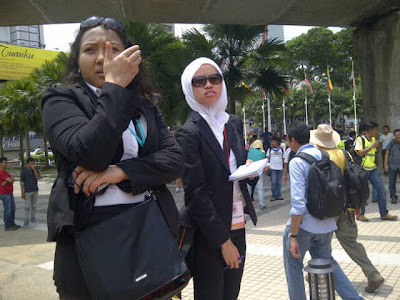 Were these lawyers ignorance of the law or they were told to ignore certain happenings?
The Bersih 3.0 mob may have fell for the trap. They are now relentlessly trying to fight back using police brutality as their arguments.

The police allowed them to march on but when it comes to crossing the Dataran Merdeka barricade, that is no go. There is a court order and the police is responsible to carry it out.

The mob should have dispersed but they did not. Instead they went on a rampage. These mob attacked the police and destroyed public property. According to sources within Hospital Kuala Lumpur ambulance and medical team, the mobs attacked them while trying to save the injured.

Yet Bar Council chose to ignore such happenings. When they blame the police, it only shows Bar Council are ignorant of the law. Or they ignore the law, perhaps?

Ambiga also cannot deny knowledge of many a happenings because she planned it that way.

She can't be ignorant of opposition hijacking. It is a repetition from the first Bersih. There are also the purple colored PAS's Unit Amal. Dig up who are in her Bersih committee members.

Complain all they want but the law empowered the police to act and do the necessary to contain the situation, even the use of force. Off course, there will be collateral damage, including on the press.

Bersih and opposition mob wanted to play rough. Such retaliation can only be expected. Don't be cry babies, okay.

As far as the press, some press member get killed in their line of work. Remember the Somalia incident. If they don't wanna get hurt, cover the fashion and lifestyle pages. Even that they might fall off a their high heels or knock over by some gay bodyguard.

Maybe they didn't visibly carry their press pass. That can be the only reason why they get hit by police too.

Do understand that the police are only human.

After a night of inhuman harassment and insult, then these mob attack them in numbers and seriously injured members of their 'pasukan' (team), don't expect police to be nice and courteous.

Courtesy is for peace time. Saturday was 'war'.

During the Bersih 3.0 mob act on Saturday, Bar Council had volunteer lawyers stationed all around as observer. Their comment are only expected to be bias against police.

One wonders: Do these so-called lawyers know the law? They want to argue about human rights, do refer to previous posting here. Police have human rights and duty bound to protect human rights of majority others.

The Star reported on the Bar Council as follows:

Vice-president Christopher Leong said police had practised restraint in the morning but their attitude underwent a “sea-change” at 3pm.

“The reported breach of police barricades in some areas does not justify it unleashing the full force of their arsenal,” he said in a statement yesterday.

Although Leong agreed that organisers of public assemblies had to bear some responsibility, he said it did not justify the rough response.

The council, whose members had monitored the rally, reported harsh police action such as firing tear gas and water cannons directly at the crowd and assaulting members of the media.

Meanwhile, Perkasa said those who made fun of the royalty should have their citizenship revoked, adding that the Royal Malaysian Police meant that they belonged to the King.

Its chief Datuk Ibrahim Ali condemned the beating and insults hurled against policemen on duty as humiliating the King.

Ibrahim Ali has a point there but lets focus on the law since they are supposedly law practitioners.

The Police Act Article 27 empowers police to regulate assemblies, meetings and processions. It is a long lengthy and detailed article of the act with few sections and many clauses and subclauses.

The police is empowered by a court order, so Bersih is not just another rejected application to the police. The court order have been served on Ambiga and her Bersih organising committee too. 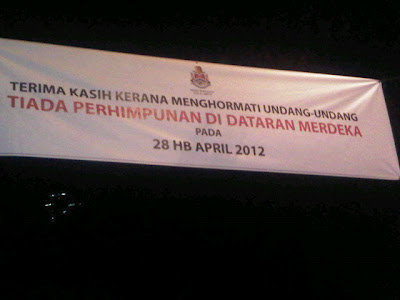 The police had given sufficient notice. There was a banner to notify them. But the defy. Still police showed restrain. 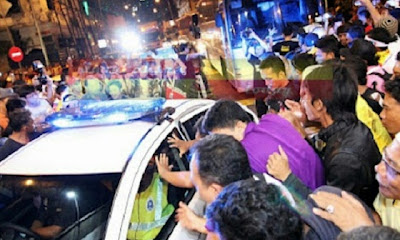 The police were not just facing with resistance like refusing to leave. They were harrassed the night before.


These mobster ram through police barricade. 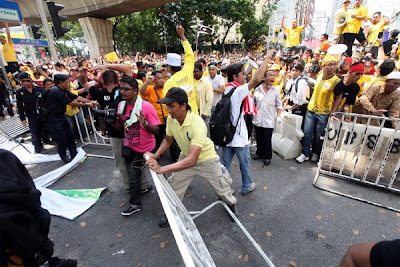 The last ditch to Dataran Merdeka was the wired barricades. The mob were encouraged by Azmin and Anwar to ram through. See the image below to identify Anwar and Azmin. There is a video under. 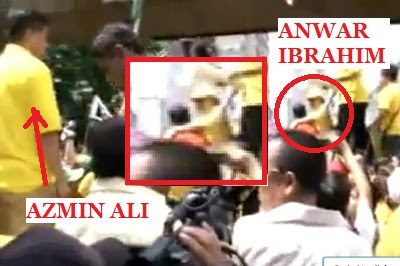 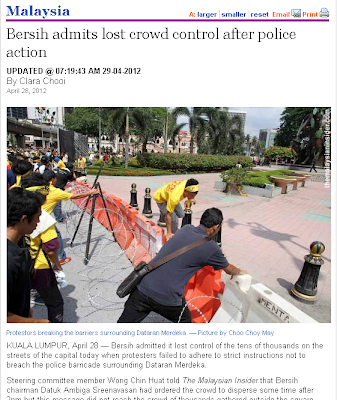 The Bar Council wants to claim about police brutality? Ambiga herself admitted she lost control. The video below shows what happen after the barricade were broken:


They went after the police and FRU has to act on the court order. 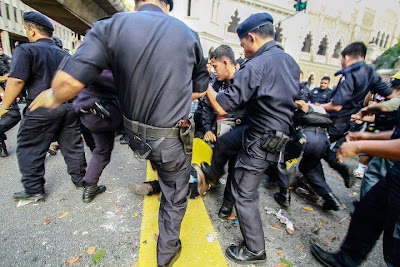 The right response to the whacked victim is "Padan muka!"
It happened okay.

The police have a job to to disperse the crowd. The law allows them to use force if necessary.

They could arrest them or they could decide to use the Genghiz Khan battle strategy. Beat the shit out of one or two and released them. That will scare off the rest.

That is police technique used elsewhere in the world too. In more advanced democratic country the riot squad are less forgiving than ours.

Heard anyone of them reportedly hurt or died?

Just don't get reports from Dr Thomas Hoogland, or Brian MacDOnald or what's the other DNA expert. Their reports have no credibility. Get it from HKL.

If there had been, trust them to make a massive propaganda to turn him or her into a martyr. Where are their senses when they could claim a defendent throwing a shoe at judges as innocent and hero?

How about the rights of others for security and etc? Rights and freedom have the law as limits. Remember that!

Those Bar Council lawyers scattered all over should see that the mobs refused to disperse. The police had to be high-handed to take control of the situation. They have to go offensive.

The lawyers closed one eye to the mobs breaking the law and only see police use of force.

They will not see that the mobs were armed. There was an incident where police arms were confisticated by the mobs. That was how dangerous it was. 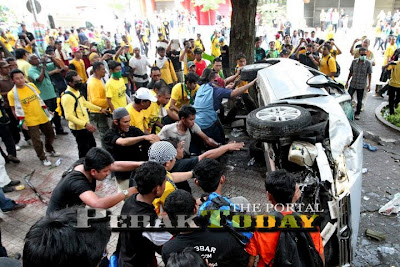 The mobs have no business to be in Sogo, if the sit-in was planned for Dataran Merdeka. They halted a police in his patrol car. Banged up the police car and overturn it. Later bang up the unconscious policeman. 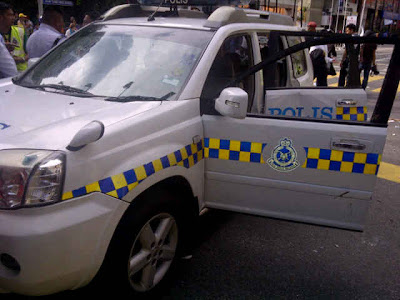 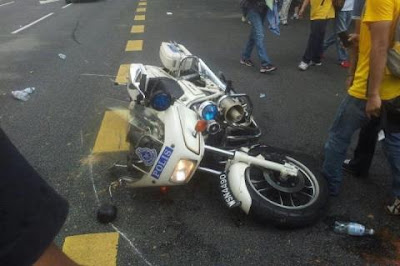 There are other police vehicles too! 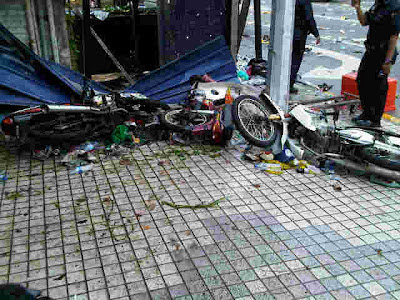 One policemen was hit by a brick and six Bersih mobs rough him up so bad that he was sent to ICU was rumoured to have died. 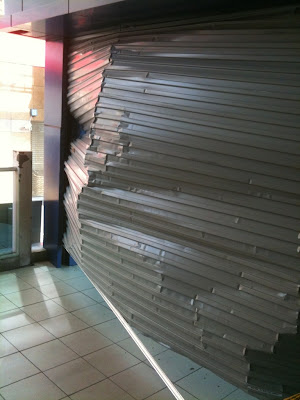 These constitute public properties same like the roller door at the LRT station.

It is a surprise that the Bar Council lawyers could not see that the mobs act on the police and public as illegal under the Police Act and penal code. The police were acting in accordance to the law, even if it about banging up a protester.

The protester banged up was not reported seriously injured, but the police were. The next time Bersih wants to play rough, be prepared to be hurt too!

One wonder if Bar Council lawyers know the law. Otherwise, let the Government take over the accreditation. One can trust the authority upon some skewed and bias lawyers to do so.

Bar Council, lawyers? hahaha...no la, they're a political party who happen to be lawyers. Who are they fooling. So it's okay to break the law. It's okay to hurl stones, it's okay to beat up policemen who were there to instill civility? Why don't I go there and beat the crap of those Bar Council idiots? Am I within the law that these idiots say? Bunch of morons.

hisham admit they make misake in Berseh 2. Lean from mistake la.Berseh like budah nakal.Just play with them.

Why Najib and Mahayuddin is in Sabah and Serawak.Irresponsible leader.

bar council and other supporting ngos should just register as a political party aligning with pakatan rakyat. habis cerita.

sad thing is a lot of my peers, so called 20s, 'new generation' believing in all the bs they spew out, treating them like gospel. dah terang lagi bersuluh salah dan tak masuk akal, percaya juga.

garuk kepala la - cant understand their rationale at all.

Dude, u r so blinded.

"Why Najib and Mahayuddin is in Sabah and Serawak. Irresponsible leader."

why blame PM & his deputy? THIS BERSIHJIJIK is not PM & DPM punya agenda!!

it's clear that bersihjijik demo is not for real voting cause. it's full ov anwar's shit!!