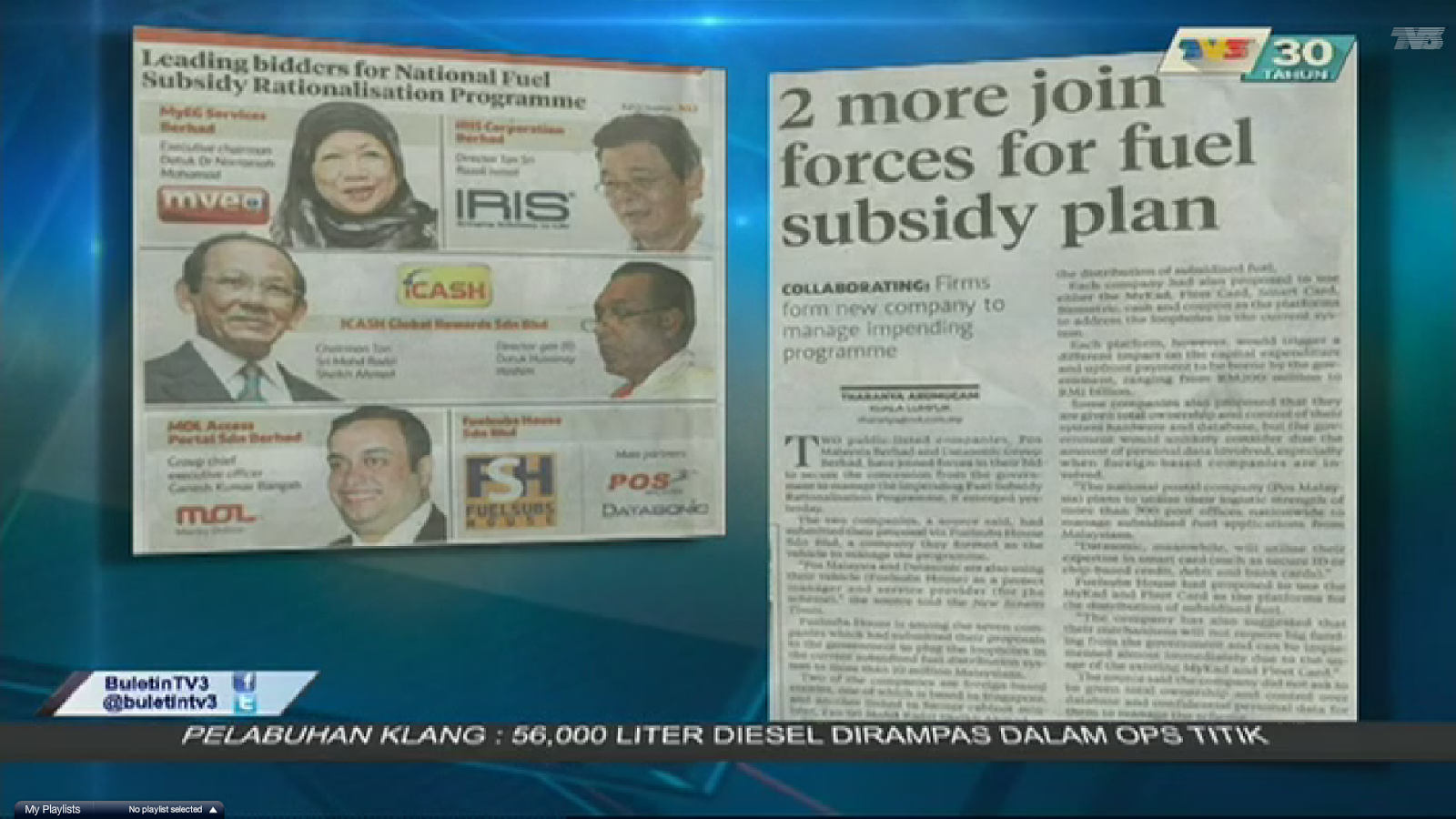 In a swift act to counter our expose on fuel subsidy card contract revealed on Wednesday here, the propaganda machinery behind Datasonic went on overdrive.

NST ran a story yesterday on the fuel card bid and TV3 also ran a story on yesterday's Bulletin Utama on NST story. [See it on Tonton.com here]

Smart PR move. They had to expedite the process and make things transparent. However, it is noticeable that both NST and TV3 tried to playdown Datasonic, a powerful and major player in the smart card business. On Tuesday, Dato Hasan Malek welcomed proposals but by Thursday, public is told that many have submitted tender

This so-called transparency will not hide a fact that the contract have been pre-determined for Datasonic-led consortium, Fuel Sub House Sdn Bhd. and the so-called tender result will prove so. This group got it because they are buddy buddy with Dato Abdul Wahid Omar and he had given away hint that he is not comfortable.

The public will not agree to this new system. Voters will hate the government for it. This openness is still a facade because it is also noticeable that en tender. with two major players in the smart card business; Sapura and MEPS not in.

MCA and Gerakan is right to say it is open to widespread abuse and smuggling. Address the fuel subsidy leakage and stop use of fuel subsidy to foreigners and business first.


The NST story yesterday below: 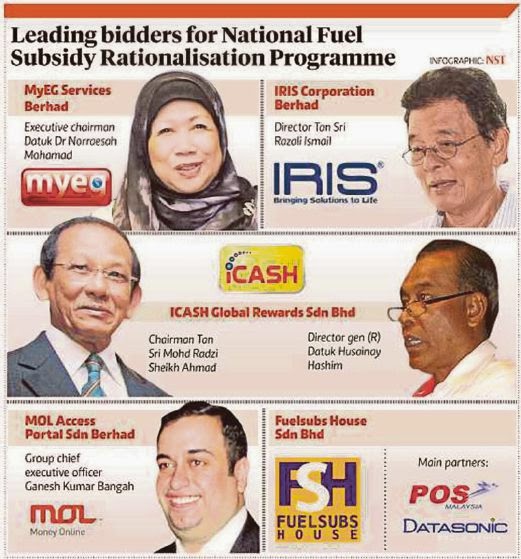 KUALA LUMPUR: TWO public-listed companies, Pos Malaysia Berhad and Datasonic Group Berhad, have joined forces in their bid to secure the concession from the government to manage the impending Fuel Subsidy Rationalisation Programme, it emerged yesterday.

The two companies, a source said, had submitted their proposal via Fuelsubs House Sdn Bhd, a company they formed as the vehicle to manage the programme.

“Pos Malaysia and Datasonic are also using their vehicle (Fuelsubs House) as a project manager and service provider (for the scheme),” the source told the New Straits Times.

Fuelsubs House is among the seven companies which had submitted their proposals to the government to plug the loopholes in the current subsidised fuel distribution system to more than 10 million Malaysians.

Two of the companies are foreign-based entities, one of which is based in Singapore, and another linked to former cabinet minister, Tan Sri Mohd Radzi Sheikh Ahmad.

Each proposal covers mechanisms on how the government can effectively address abuses and leakages, which has cost the government in the billions of ringgit in losses, and facilitate practical implementation of the distribution of subsidised fuel.

Each company had also proposed to use either the MyKad, Fleet Card, Smart Card, Biometric, cash and coupon as the platforms to address the loopholes in the current system.

Each platform, however, would trigger a different impact on the capital expenditure and upfront payment to be borne by the government, ranging from RM200 million to RM1 billion.

Some companies also proposed that they are given total ownership and control of their system hardware and database, but the government would unlikely consider due the amount of personal data involved, especially when foreign-based companies are involved.

“Datasonic, meanwhile, will utilise their expertise in smart card (such as secure ID or chip-based credit, debit and bank cards).”

Fuelsubs House had proposed to use the MyKad and Fleet Card as the platforms for the distribution of subsidised fuel.

“The company has also suggested that their mechanisms will not require big funding from the government and can be implemented almost immediately due to the usage of the existing MyKad and Fleet Card.”

The source said the company did not ask to be given total ownership and control over database and confidential personal data for them to manage the scheme.

“They have suggested that the data to remain under government agency, National Subsidy Corporation Bhd.”

On Tuesday, Domestic Trade, Cooperatives and Consumerism Minister Datuk Hasan Malek had said the government was in the midst of studying the proposals and only the one that benefited the people would be considered by the cabinet. The plan was expected be rolled out in September.

In TV3, Fuel Sub was mentioned as the third name with MyEg.com as the lead story. While, NST pictographic present Fuel Sub in the last part.

And, the "Chongs" are the ones moving in the market packaging the whole thing and approaching the vendors.

The name Razali Naina Merican rings a bell. Habibur Rahman is a name no many knows but we know who is this former Nestle Manager.

If there is a need for a fuel card, it must be done with transparency and fair evaluation done with all deemed qualified be given a fair bite of the apple.

No need the secrecy and rush.


These Fuel Sub people have been throwing names left right and centre. Our unhappy source claimed they have been intimidating government officers including Petronas Dagang but they couldn't show the Letter of Award.

Pos Malaysia would likely be involved in logistics. However, it will not make the public happy to have to register with Pos Malaysia to enjoy fuel subsidy.

How about those people in the interiors in Sabah, Sarawak and even Pahang where Pos Malaysia does not reach and it will take days if not weeks for the fuel card to reach? No fuel card system will be implemented there.

Are they to be denied fuel subsidy? As it is, there are. Transport cost made their fuel cost extremely expensive.

If we can read from the Joint Venture and shareholding structure, profit could likely be thin. One IT businessman told us they can't make the expected return and the cards are likely to printed in China to be cheaper. 70 sen ma ...

It will not be safe security-wise to have our cards printed abroad. It is also an avenue for abuse and a sure chaos.

The fuel card idea is not that great an idea and no big deal technology wise. Any local geek can come up with something better. Our lade source in MoF said also that these people stole someone's idea.

As it is, the fuel card proposal is missing the most important point that the bulk of fuel subsidy leakage is due to smuggling.

Our estimate in the previous posting place it at more than 60%!!!


Why the need for another card in our wallet when there are already our MyKad and every Malaysians already own one?
The fuel card system will be a burden on the public and will cause a backlash against government. The Government already have lots of problems to solve and deal with.
Not another one please.
at 6/27/2014 11:12:00 AM

Its better with MyKad - it has all the details and best to keep it update yearly for such personnel / private information.

It could detect misuse. To some who have diesel/petrol quotas must be recorded under agencies or koperasi. No personnel dealings. Petrol stations too.

All information must be linked to the gomen kawal selia - details of day to day transactions and finally monthly account that telly with quotas given.

To save cost, Pos Malaysia is already in the proper links an infrastructure. We do not need other private sectors that might manipulate th advantages given.

However, we do need gomen depohs in areas of prime suggling. It happens in sea, borders and private depohs. These must stop totally.

Give to sectors - north - middle - south. Sabah / Sarawak too.

Main Operator and their selected subs by gomen.

The less interference with our free market of doing things the better. Cards and machines cannot be the replacement of enforcement measures which are the RESPONSIBLE DUTY OF ANY RESPONSIBLE GOVERNMENT. Costly gimmicks have cost our Governemnet dearly time and time again.And our money is fast running out.

It is the UMNOh way and so it must be supported. The people can shout , scream, dance and sing but it does not matter. Let the games begin and let the one with the strongest cabel win and maybe one day, we can have a tender for an UMNO Kad.

Trust Malaysia to do things the hard way with unnecessary complications and convolutions!

Why not do away with the fuel subsidies once and for all? Full stop.

That will, at one swoop, do away with "leakages" etc.

Plus it will be fair because everyone - locals and foreigners - will be paying uniform prices for petrol and diesel.

But this would be too simple, it seems!

At the end of the day, can all these brilliant ruckus solve and eliminate fuel smuggling entirely?? Bearing in mind non subsidized diesel at RM2.80/litre and petrol at RM2.74/liter is still cheap compared to that sold across the border, and still an attractive and lucrative business for smugglers to operate albeit whatever enforcement from the authorities.

The authorities will still be having non ended sleepless nights, but somebody will be singing to the bank. The authorities and consumers/rakyat still will be looked like fools.

How will the SOP be? If based on income, then a retiree not on gomen pension driving a Mercedes E250 is eligible. If based on car, then he would not. Has the cabinet thought this out carefully? Intelligently?

BTW, I heard that a non-refundable fee of about 200-300 ringgit is imposed on placements at local universities. If a student opts for another uni, deposit is forfeited. I don't have any uni going kids so I don't know if this is true?

Suddenly, a Minister has found out that we are running short of babies like Singapore. The shortage of babies in Singapore was caused by the brilliant Lee Kuan Yew with his 18 failed Policies for Singapore because of his 2 Child Family Policy which deliberately screwed down his own citizens. In our case, it is different. The Minister wants to give subsidies to produce babies.
Take away subsidies from petrol and give it to the babies is her cry ! Malaysia Boleh !

This is utterly a sheer waste of money.We do not need such system just so the rich can or cannot enjoy what the poor deserve. Remember, there are more poor than affordable rich to pay the poor to buy fuel for them. LooK at what Singapore did. they stop any diesel vehicle not using EURO 4&5 AND WE HAVE TO OBLIGE. tTHINK SMART AND STOP BEING GREEDY and FOOLISH.

The real issue here is about the rakyat having to pay for all these BIATCHES actions....

The rakyat are just FED UP with the Premier and his morons ministers and blood sucking advisors way of doing things which have made life more complicated and hard...

We have an example in Tun Dr Mahathir's administration which was not 100% good but at least people were not burden with all these stupid price hikes. WHY CANT THESE IDIOTS LEARN FROM THEM??? TO EGO OR JUST PLAIN STUPID? BODOH SOMBONG!!!

The price of oil and all other things were not major issues during his premiership...Why? Wasn't there any global and local crisis during his time? Why he and his team can do well? LEARN FROM THEIR EXPERIENCES!!!

GST??? These government morons are telling the people this and that will not be taxable. THE QUESTION IS WILL THE PRICES OF THINGS GO UP WHEN YOU APPLY THE GST??? OF COURSE YES!!! WHY? BECAUSE THE BLOODY BUSINESS ENTITIES WILL PASS OVER ALL THOSE COST TO CONSUMERS. If the material producers, manufacturers, wholesellers, retailers and all other in the chain being taxed, WHO WILL END UP PAYING THEM???? ISN'T IT THE CONSUMERS???

TO NAJIB AND MINISTERS....PLEASE STEP DOWN!!!