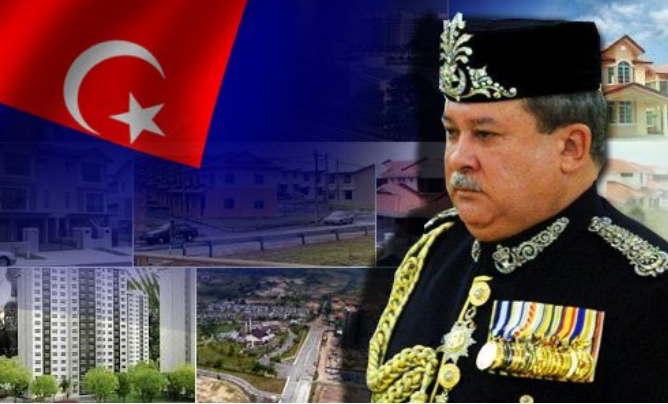 The Johor State Government heeded the widespread voices against the Johor Housing and Property Amendment (JHPA) Bill to be tabled at the State Assembly tomorrow. [Read Utusan Malaysia, Bigdog and The Star]

Hopefully all troubling clauses to the effect of giving the Sultan the absolute discretionary power be amended. The concern of all parties, opposition or goverment, politicians or activists/media, are that it could demean the institution of Malay rulers.

Public listed businesses and public policies are open to public scrutiny thus it puts the Malay rulers open to public critics and at times ridicule, as experienced by government-side politicians

This raises the question of YTL riding on their partnership with the Sultan of Johor for a new IPP project in Johor.

Since it was not done according to the proper open tender procedure already in practise, YTL had demean the institution of Malay rulers, specifically the Johor Sultanate. 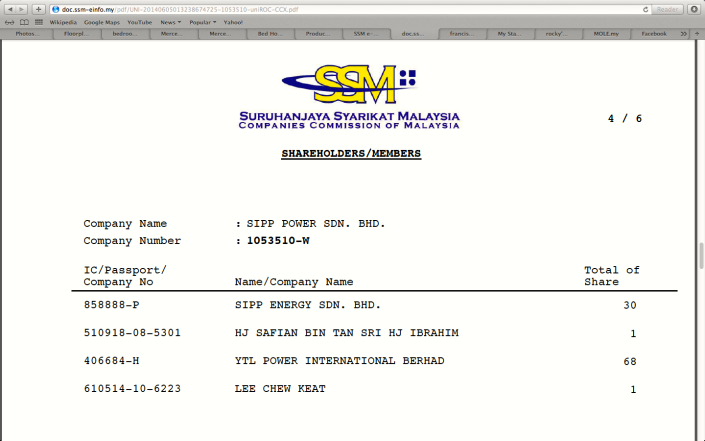 In Bigdog's posting here and our past posting here, Crony Capitalist YTL had only few days ago won a Project 4A IPP venture project supposedly based in Johor, without undergoing proper open tender procedure and had used the much questioned direct negotiation tender.

Their so-called "innovation" had put the Sultan of Johor in a bad light to the public.

YTL's existing controversial PPA contract with TNB for their first in Malaysia IPP is due to end. In his pursuit to get the contract renewed, Tan Sri Francis Yeoh would have likely invited his Majesty into a new IPP venture, SIPP Power Sdn Bhd to secure a renewal.

However, YTL International Power Berhad owns 68% in SIPP Power. The 30% minority partner is SIPP Energy Sdn Bhd, in which 51% is held by the Sultan of Johor.

Obviously, YTL is in the driver seat with equity and management control in SIPP Power but it is the Sultan that will attract public scrutiny for Francis Yeoh's unsavory backdoor approach to securing the contract.

YTL supremo, Tan Sri Francis Yeoh is all too familiar with the open tender procedures for new IPP. He  had participated and lost in a recent tender despite his so-called financial and technical capability. [Read in our past posting here]


By dragging the palace in order to improve his chances in securing the IPP contract renewal for his company's benefit, he had indulge in a business transacton in which the procurement is made inconsistent with known public practises on IPP tender.

Francis Yeoh has disgraced his Majesty and the Malay Ruler institution in the eye of his subject.

Seriously, his Majesty should withdraw and insist that the award be re-tendered with proper governance, accountability and transparency. .

In addition, words emanating from within YTL is saying Francis Yeoh had told his Managers and staff that he is not worried with the uproar on the just concluded JHPA. He claimed that Johoreans can be tamed because they blindly submit to the Sultan.

If this is true, it tantamount to insulting the institution of Malay rulers as though they could be riden on and abused for his business pursuit.

His Majesty should distance from such businessmen of unsavory character and carries a bad public image which only taint the image of the royal family.

There are Bumiputeras that can be taken as partner by His Majesty in which they are as capable,  knowledgeable and most important, ethical in their conduct of of business.

If his Majesty pursue such smart partnership, it would send the signal that his Majesty has not foresaken the Malays in favour of Chinese in pursuing business interest.


Furthermore, the institution of the Malay rulers is entrusted by their forefathers to protect and defend the Special Rights of Malays and Pribumis of Sabah and Sarawak as prescribed in Article 153 of the Federal Constitution.
at 6/08/2014 09:47:00 PM

it takes two to tango!!!

you wanna whack YTL or francis, fine go-ahead but not this way... and then actually expect every one to swallow everything you wanna shove?, well you got another thing coming..

make a choice.. whack ytl and or francis then choose another story. this story you got no choice, you got to whack both ytl/francis and the royalties. you pick.

Chinese trying to deviate the issue.

WHy is Tony Pua quiet about the whole thing about direct nego????

Nice try whacking the royal family over a good investment deal when UMNO cronies have grow bloated from the decades of plundering the nation wealth.

Bro.,
1). YTL boleh berambus to one of the "democratic, crony-free countries"...better still, the gomen can ask the Yeoh clan to leave "nicely & quitely" laa...many ways of doing this, no issue;
2). Kena ada someone bagi advice point blank pada beliau not to meddle and push his luck too far la...nanti jadi objects in muzium la like Inndonesia;
3). Khaled can take early retirement la...kalo Najib berani he can do this la before the whole south Johore kena lelong to unker lim, son&co. & his band of merry men from down south la...

YTL must have this IPP so that they can sell to Singapore. Just lay the cable across selat tebrau.

HRH Sultan Johor should ask for majority stakes and be a major player.

Is not that difficult to run an IPP.

This guy who holds a 22% guaranteed profit Agreement with the Federal Government for his Monopoly invested in an old Singaporean Seronok Power Station by using our Rakyat's money to subsidize his badly thought out investment. It is alleged he praised the cash strapped Singapore Government sky high. He conveniently forgot about his subsidy of 22% guaranteed from the Rakyat's money. He does not deserve to have anything ! He also used this Rakyat subsidy to invest in cash strapped industries in Australia and the United Kingdom. Further, with the Rakyat's subsidy money he gave big big bucks to King's College, London. This guy does not know that charity begins at home !

It is alleged this same guy began by selling the Raintree Club, Kuala Lumpur memberships without the land beneath the Club and his connections were introduced by an ex-draughtsman !