Singapore could tac but Johor not allowed to tic 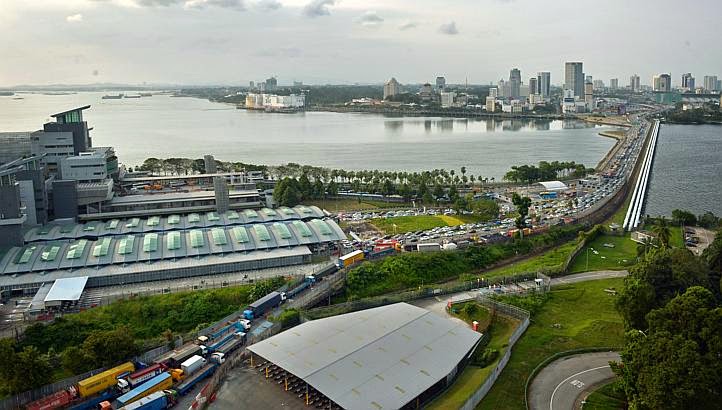 On July 4th recently, new Transport Minister Datok Liow Tiong Lai was reported by media saying that government is studying the  proposal by the Johor state government to impose a charge on foreign cars entering the Malaysian border through Johor Baru by RM20. [Read Today here]

That move is heard to have invited complains by Singaporeans and Malaysians driving SIngapore-registered cars, whose vehicles swarm the Johor Baru immigration checkpoint on weekends and also weekdays, except the morning and evening working day rush to and from Singapore.

Liow was overly considerate of Singapore in Johor's tic to the tac by Singapore's Land Transport Authority (LTA) intention to raise the Vehicle Entry Permit (VEP) fee for foreign-registered cars from S$20 to S$35 a day and Goods Vehicle Permit (GVP) fee from S$10 to S$40 a month from August 1st. [Details here]

Forwarders will be hit hard by Singapore's move [read Malay Mail Online here and NST here] but The Star quoted Liow saying, "However, this (the proposal by Johor) must be considered carefully as Malaysia has borders not only with Singapore, but with Thailand, Kalimantan and Brunei.”

Why must the MCA President be so concerned of Singapore access to these countries via Malaysia? Understood, he is merely concerned with the impact to other countries should we apply the same entry charges as applied to Singapore. Is that too difficult to figure out, Minister?

Not only none of the BN Members of Parliament or politicians are not vocal on this but moe important, our MCA Minister is too chicken to tic back the Singaporean's tic? Is our side of the border not congested by Singaporean vehicles?

A quick look at vehicles leaving and entering Johor Baru immigration checkpoint and one will realise that almost 90% of vehicles are Singapore registered.

The owner or driver of the vehicles could be Malaysian working in Singapore because Malaysian vehicles are restricted to only 10 entries into Singapore. The kiasu Singaporeans realised Malaysian cars are cheaper and Malaysians vehicles would be using or swarming Singapore roads and highways. Thus for the rule on Malaysian registered vehicles. 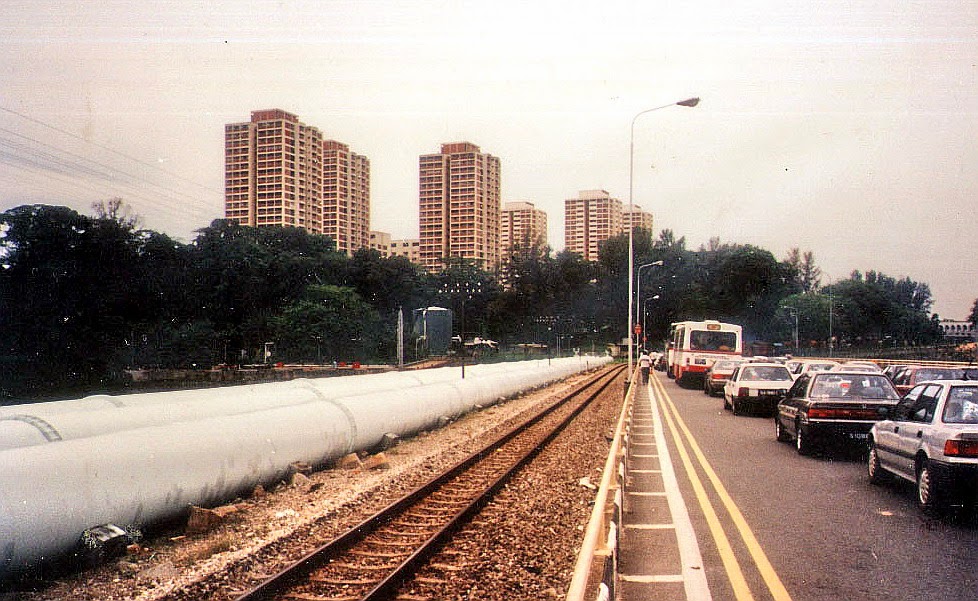 With Malaysians hardly do much leisure traveling to Singapore, the charges paid translated to Malaysian ringgit are too drastic a move to further curb Malaysian vehicles congesting their side of the border.

The amount Singaporeans have to pay to enter Johor for weekend rest and recreation out of their pigeon holes should be significantly much more. 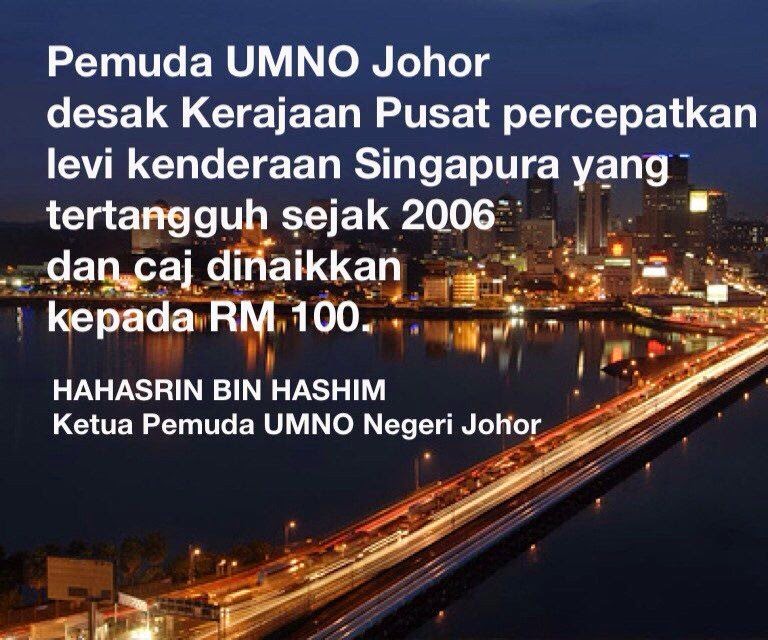 Even at that rate, it does not cover the cost and inconvenience the people of Johor Baru. 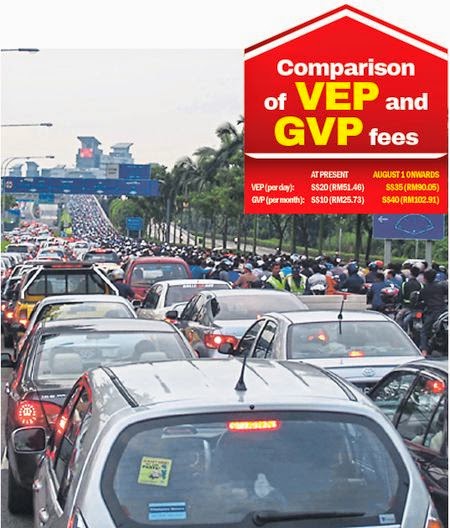 They had to endure the  congestion not only at the causeway but the within Johor Baru city and Iskandar Malaysia which are more frequented by the rising number of Singapore registered vehicles.

The Singaporeans and Malaysians working in Singapore is having the best of both world.

They get Singapore salary and live in Malaysia for cheaps. Naturally, they do not pay their income tax and road tax to Malaysia but to Singapore.

They get to consume and buy Malaysian subsidised petrol and controlled food items. While it is acknowledged that it help the retailing sector in Johor Baru but the taxpayers had to absorb for the subsidy. Even so, a significant number of retailers at shopping complexes are Singaprean-owned.

In Malaysia, they get to use our more halaalan toyyiba tap water, which is not New Water as sourced directly from sewers and toilets as in Singapore.

The presence of Singaporean and Singapore money caused living quarters to be too expensive and beyond affordability of all Malaysians; Malay, Chinese, Indian or Ibans of Pasir Gudang. Perhaps charging Singaporean and Malaysian working in Singapore owning Singapore vehicle could help Johor state address this problem by building more rumah mampu milik than earlier planned. 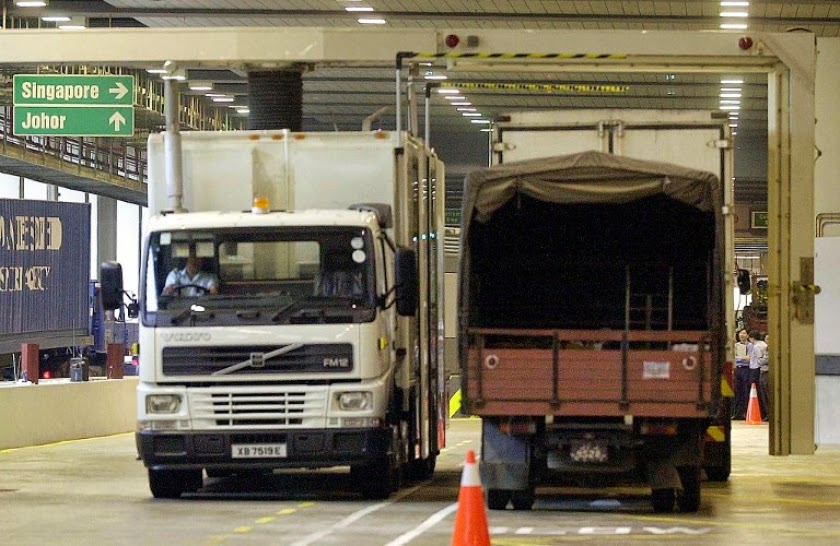 An important point that need to be known and highlighted is that Malaysian government had to spend their own money or via privatisation to build infrastructure to addressed the traffic flow and congestion created by Singaporean vehicles.

The rationale for the aborted Scenic Bridge was to enable traffic from East and West and the ones  coming and leaving Johor Baru Central Business District to flow.

It was Singapore that made a big hurrah and Dato Nazri Tan Sri Aziz and double crossing Tan Sri Gani Patail chickened Tun Abdullah Ahmad Badawi into cancelling. The current chaotic predicament at the Johor Baru business district was partly due to the cancellation.

Singapore kept benefiting themselves without consideration to Malaysia and Johor kept losing out. It is high time for Johor government make some money and rakyat of Johor benefit more from the flood of Singaporean in Iskandar.

After all, company tax on retailers benefiting from Singaporean business all goes to Kuala Lumpur, if they actually pay.

Do not talk about the toll at the Johor-Singapore Causeway paid to PLUS for RM2.90 to enter Johore Baru but not to return to Singapore. That is for use of widened causeway. It is pointless to raise issues on tolls for use of highways inside Singapore and inside Malaysia. 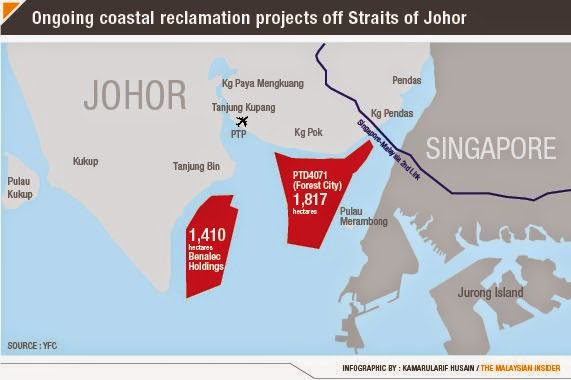 In another case, Singapore made a big complain on the land reclamation done by Johor at the second crossing. They are even going to the point of taking it to international court. [Read CNA here and MSN Malaysia here]

In early 2000, Singapore was reclaming land at Pulau Tekong that it is blocking water passage way and polluting the sea on our eastern side. [Read here and ABITW here].

And Malaysia did take them to international court.

That is both their tic for tat and an example of Singapore kept benefitting at expense of Johor but Johor could not do so.

It is high time that Johor and Johoreans not be halted from doing a tic-for-tac against the Singaporeans. Kuala Lumpur had decide on the fate of Johor for too long but Johor ended up being played around and the losing end to Singaporeans for too damn long.

Johor even lost Batu Putih island and soon as Tun Dr Mahathir said recently even Johor Baru will be lost to Singapore because of Kuala Lumpur's failure. The Singaporeans are already talking of the next acquisition in Batu Pahat as the next Iskandar. [Read here]

Finally Johor has a warrior that will stand up to the 'Ketuanan' heroes.

Thats the problem with MCA ministers since long time ago. They only know how to protect their race interest only like Chinese school, basketball court etc. But matters that impact nation, they're weak to respond, maybe too "chinese school exposure, no kebangsaan school exposure" . All these years S'pore government can do anything including claiming our island and we on our side just look on. They're kiasu and yet we make it seems that they're one up than us.

All because our authority is too scared to do anything or too dumb and do not know what to do. Hello, younger generations are watching us how we handle such issue. Now, Malaysia is our beloved country, tanah tumpah darah ku, these Singaporeans are welcome to our country but at the same time they must pay for the roads they ride on in Malaysia because they don't pay road tax in M'sia. And we have to resurface our roads as their Ferrari, Merc, BMW enjoy our highway for free all these years. They enjoyed our subsidised fuel all these years, they enjoyed our facilities and hospitalities for free all these years, they get scott free from any summonses all these years, etc.

To have a similar payment system like what the Singaporean are doing to us has been brought up many times by many concerns but it always got shot down by MCA minister. The last time was MCA minister for Tourism, Ng Yen Yen. She express concern that if we start charging the Singaporeans will not come into malaysia and we may lose tourism income. That thought and comment is just too shallow for a minister like her.

Go to Dubai, the hotel room rate that you stay is plus 15% tourism tax and yet many millions still throng to Dubai. Don't you know that that frequent traveller Singaporean to Malaysia now buys MACS sticker for RM30.00 and stick it on his passport cover, he doesn't need to stop at our Immigration. All they need to do was just wave their passport and reader will capture his details just like the auto-gate and the airport. This was the brain child of a local malaysian company, Iris Corp Bhd. to put up such system at the request of our Jab Imigresen Msia and almost 500,000 of the stickers were taken up by Singaporeans.

Hello, they (Singaporeans) are willing to pay. If they can buy bungalows, condos, investments, what is this kacang putih entry permit.

I'm sick with indecisiveness with our present Government. I miss a lot the then Tun Mahathir Government. He made us Malaysian proud.

Without Singaporean spending power, Johore is nothing. So be careful, you don't want to lose something big by getting short term benefit.

In the first place, Pulau Batu Putih/Pedra Branca was decided by the ICJ. Malaysia had ample time to research and present it's case. The ICJ judges weren't convinced. End of story.

As for Singapore's decision to increase entry fees on foreign vehicles entering the republic - that's a decision for a independent sovereign state to make.

Malaysia, too, is equally within it's rights to impose a hefty toll on foreign-registered vehicles entering Johor by the Causeway or the Second Link. Will it do so?

What Singaporean spending power ? Only the poor Singaporean spend in Johor. The rich Singaporean spend elsewhere. Check your facts, bro. They take advantage of our cheaper cost across the causeway and that has cause hardship to Johoreans in terms of living cost. What benefit to the people of Johor ? They don't pay taxes, enjoy our subsidised fuels, etc.

What are the numbers of Singaporeans coming into Malaysia and what do they spend on ? Its all foodstuffs and fuel. thats all. So what spending power ?

We're talking about charging the same as they are doing to us. Question is why aren't we're doing it ? Its only fair. What la you, kiasu !

Minister Liow not seeing the point. Charging levy is another source of revenue for government.

Imagine by doing this, the government can reduce car price in Malaysia.

That is pure loads of bulls....its your arrogance that limit your brain to function, that said, if you have brain after all!