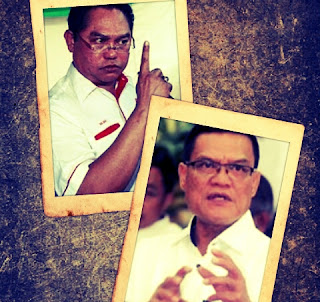 A recent incident confirmed us that should Dato Seri Anwar Ibrahim go inside, it will not make UMNO job any easier but harder.

One reason people rejected Pakatan Rakyat was because of Anwar. Without Anwar and should another strong and credible personality arise as potential Prime Minister, UMNO and BN does not have anything to offer as campaign line.

I Love Najib and 1Malaysia will not work this time. As one former Deputy Minister told us last month, "It didn’t generate the excitement for BN to win convincngly for GE13. The “popular vote” or total votes favoured PR."

Voters would rather fell for the 40,000 Banglas lie by Anwar Ibrahim than believe in the tangible, but not understandable, acronyms of programs from Najib.

Over lunch yesterday, we told the host’s son that if voters are not voting BN this time around, it is because of UMNO. They have not shed the attitude of arrogance and the insecurity behind their arrogance. 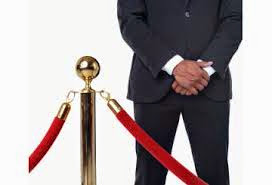 There are many events that made us think so.

The recent event mentioned involved only an officer of a Minister. There was a meme going around to promote a program his boss initiated. Without mincing our words and with the intention to test him, we said, “Half measure. He should do better.”

Naturally, the insecure young man expressed a controlled angry response to ask why. So we gave hint instead of a direct answer to see how open he is. He must have assumed we were plucking ideas from the sky and just went defensive twice.

In one occasion, he was gloating on the credibility of a name as if we care. It cannot be as credible as the person we dealt with on the subject for the past 6 months. The man has done it and knew the intricacies well. In fact, he grew up in that industry.

Although the nuances was adversarial and typical defensive behaviour of a gatekeeper, it was still polite. However, news reached us that he accused us as going against his boss. How dumb can that be?

But it is typical presumptions of kaki bodek working around Ministers. The slightest of tone of differences and they bad mouth you to their boss. Now we understand the bad rumours going around on this Mfer.

With people like this around his boss, it will not auger well for his future. People have helped him to get where he is but he must have what it takes to stay. Arrogant and insecure staff will only bring him down. It is a matter of time.

Generally, UMNO and BN leaders are not as arrogant as the negative perception of past leaders. Save for a few like one former MP and a current Deputy Minister from a component party, they are more willing to communicate and meet to hear us out.

Off course, bear in mind that they are not as immediately available for telephone chat, teh tarik and dancing fish lunch as before. Their free time is so limited that it is not fair to be too quick to judge negatively on them.

These days political leaders are a quite open to dialogue and criticisms. They are still human so be polite. If it is fair, they will hear you out. However, no one will take kindly any slander or wild accusations devoid of fact and proof.

Initially, we are willing to forget the incident with the Minister’s officer as mere immaturity, but the public display by Dato Noh Omar and Dato Adnan Yaacob made us realised that the old problem still lingers. 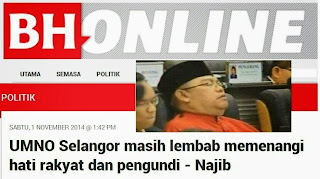 Dato Najib complained of getting tired and embarassed by the lembab (slow and complacent) ways of UMNO Selangor leadership at a recent UMNO state convention. It was a direct criticism towards Noh Omar. It was then followed by a more direct comment by Tun Mahathir in his blog [read here].

Noh Omar responded with flimsy arguments and counter criticism against the person that gave him an opening in his office that led him to Ministership under Tun Abdullah. [Read here]. He had taken the criticism badly despite the same criticism was expressed by Najib.

Frankly, he is incompetent to lead. He can be another Ketua Bahagian and take charge of his constituency BUT not to provide the leadership or strategic direction for UMNO and BN Selangor.

When posed with the question on his gameplan, he would dwell on Selangor not having a Federal Minister and denied funding as opposition in the state. How un-fofesyenal!

Anyone can see that he is saying he will only have a strategy and gameplan when he is made Minister again. He thinks we are not aware how he finance program for his state despite being denied by the state government.

Basically, he has no strategy in mind and insist to be spokesman on issues against Pakatan to raise his profile. By giving him a higher profile, does it help UMNO Selangor? No, and neither does having the existing office bearers will help UMNO in Selangor.

Ignore what the UMNO Selangor Secretary, Dato Johan and Ketua Puteri for Tanjung Karang have to say. It is just typical shallow and apologetic bodek-ing arguments which reflected a desperate response to hold on to power. 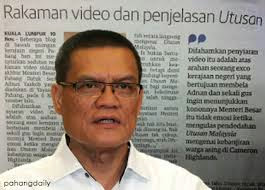 Pahang Menteri Besar, Dato Adnan Yaacob does not seem to despite being wrong and improper.

Few weeks later, there was a heavy rain that resulted in a bad mudslide. From an issue of illegal immigrants, it exploded into issue of environmental degradation, illegal land encroachment, land grant issued on forest reserve, and poor monitoring, enforcement and corruptions by state government.

No specific accusation was made and no name was mentioned. Of late, Utusan have been on the ball on very sensational exposes on leakages in system of government. As an UMNO leaders, Dato Adnan Yaacob should appreciate the clean-up effort.

It is highly improper of him to smear their party-owned newspaper in front of other laughing media. Instead of managing the crisis, Pahang Menteri Besar response was to blast and ridicule Utusan Malaysia. Him, with the assistance of one state assemblymen fearing to get chopped by Adnan, spread a video claiming innocence. Hear the MB out in Apanama here.

That is hitting the messenger than addressing the issue in hand. Before he left, he hurled insult at one Utusan reporter to say, “Bila nak tutup Utusan? Berapa hari lagi?”. [More here] Is that not rude and arrogant?

To be fair, Adnan is not as rude or arrogant in person as potrayed of him by opposition in an incident at a by-election in Pahang many years ago. He is jovial and fun to be with. Although he can joke around, he can be serious and quick to pick up on suggestions and ideas presented to him.

Unfortunately, this incident tarnished his name. It is uncalled for and reflects badly on him. [MI reported here.]

There was no such insidious plan to bring him down in the same manner as done by Khairy Jamaluddin on Dato Dr Khir Toyo in the Bukit Cerakah incident. So why did he reacted in such insecure manner that is unbecoming of a Menteri Besar? 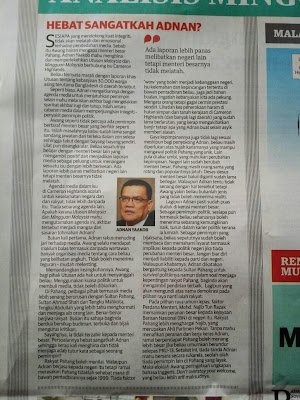 For UMNO sake, Utusan's Awang Selamat have every right to criticise Adnan. [Read Utusan here]. Utusan deserve to defend themselves for they are not wrong.

The state secretary admitted the state was complacent in their monitoring and enforcement. MACC went in to investigate for possible collusion by state government officers in cases of land encroachment and the deforestation. Immigration had went in too.

In the Bukit Cerakah case, there was the involvement of members of the royal family thus that made Khir Toyo clammed up to save their face. Is the same happening in Cameron Highland?

One source investigating on the story (and it is not Utusan) was saying some of the land that had ownership grant issued had several layers of proxies that could not be identified. Adnan is close with the palace but we are talking members of the royal family and not the Sultan. Is that what is making Dato Adnan nervous and insecure?

Hopefully it is not. An SMS is going around that he has threatened war against Utusan and a day later proclaimed that war has begun. It does not auger well on UMNO but perpetuate the image of UMNO as arrogant. 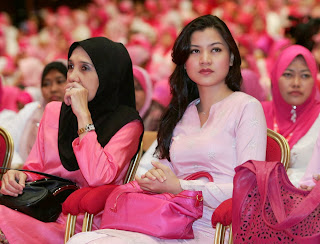 Come UMNO General Assembly from on November 20th onward, such arrogance will be further accentuated with the Hollywood Red Carpet arrivals of participants displaying their wealth and prancing their luxuries. Their casual attitude does not reflect the seriousness of the event.

Yesterday there was a roundtable talk to discussed motions to be tabled. Dato Hishamuddin chairs the meeting.

While he told the press that there must be no obstacles on the delegates to express their concerns [read here], one position holder of an UMNO wing told us that there was discreet calls to advise not to say this and that.

Is this not censorship and discreet display of insecurity? It could even be bodek-ing and ampu-ing. That will not help the UMNO cause in this time when they are weak. Surely, cousin brother does not need nannying. Despite some slack here and that in his communication team, he is still quite capable of handling himself.
at 11/13/2014 08:25:00 PM

UMNO it too obtused and lost in their own world. Only the tops knows what sIs happening but only few a
Seemed concerned. The grassroot are mixed between those not knowing anything or not concerned or obstructed from doing anything.

A few days back najib was outside and muhyiddin was outside too. Seems like umno is stupid from the top down. I dont think arrogant is the word. All the old warlords are past their sell by date. They might have been cute and savvy once upon a time, but that grace by illahi will leave us all and it has left for majority of umno's leader. The big picture is umno but the bigger picture is are the malays that dumb that the dumb ones assume power?

P/S: Have you listened to The Endless River?

Anonymous said...
This comment has been removed by a blog administrator.
4:44 PM

Stick to the subject and not get into such cliche minded personal.

So I was introduced to the chairman, but do you know the CEO is my alumni and related?

There is more that you do not know. So if you do not have anything clever to say, then don't comment.

UMNO forgets that not all malays are UMNO members, nor are we PAS, PKR and DAP members. It is not the political grassroots that they must listen to. It is the malay community.

Please continue being arrogant and syok sendiri, and continue forgetting the malays by giving special treatment to non malays. The large malay block that voted you in GE13 will NOT come out to vote them.

If there is no improvement in UMNO, me and my family will surely not go out to vote in GE14.