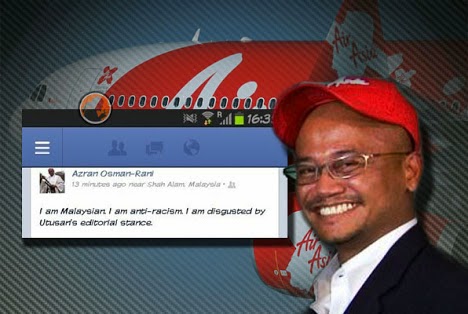 A friend sent us a news report by Reuters today with regard to Air Asia X.

While reading the news on our smartphone at the Airport and waiting for our plane to go for a talk out of town, we were reminded of the above statement by the CEO sometime ago.

It had the malicious intention to shame Utusan Malaysia and was giving support to the critics of Utusan from among the oppositions and left wing liberals.

Supposedly liberals would respect the right and freedom of Utusan to express their views, even if they disagree with Utusan.

After all, they are not denied their space in the media.

In fact, they now have all the space to express their views in the print media. They are dominate the English, and Chinese newspapers. Their online news portal, FBs and other social media are more effective.

The liberals are so vocal and aggresive when it comes to Utusan but silent to the unethical practises, bias and unbalanced reporting, and excessively skewed views of media aligned to their point of views.

The remaining space that the mainstream view have to express themselves via Utusan or NGOs like Perkasa are being smashed to smitterens.

Just last week, the agitator supremo for the racial riot if May 13, 1969 called those with such line of thoughts as extreme. Is he now the mainstrwam thinking of the masses?

It is a wonder whether liberal Malaysians truly understand the basic believe in liberalism for freedom and equality. The liberalism that they understand could merely be the yearning for a bohemian and hedonistic lifestyle.

If Malaysian traditional culture is considered as the norm of society, all race and religion strongly advocate and adhere to moral value, common courtesy, emphasis on humility, and responsibility over excessive individualism. 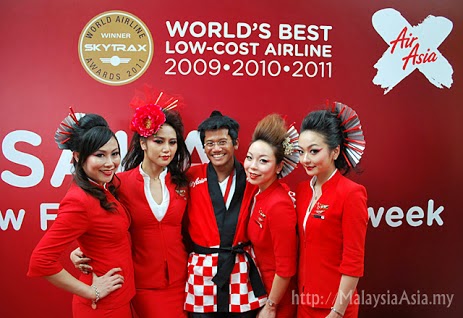 As for Azran, he must have been in the height of confidence that he lost his bearing as a corporate CEO to use his position to express his personal likes and dislikes peppered with hate.

It is an arrogant act when considering that by explicitly expressing to refuse to advertise in Utusan and spiced it with hatred, he is telling Utusan readers that he does not want their business.

He must have forgotten which station his train is heading for to ignore that Utusan serves the Malay segment of the market. 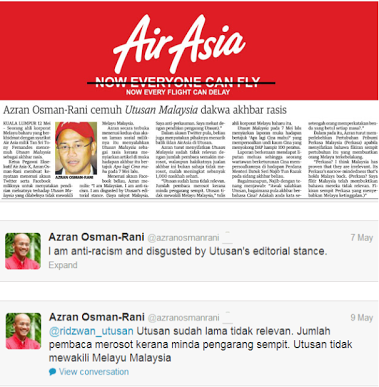 The question everyone should objectively ponder is: Are the views of Utusan so distructive as to warrant such description of disgust?

Is Utusan's traditionalist views not based on what was an accepted norm in the past and elements of it's relevance still remain?

The freedom, equality and government free environment in the social, economic and political ideas of liberals may not necessarily translate into the peace and prosperity we used to cherish before.

In their quest to change the government or dominate the thinking and direction of governing of the day, it is only perpetuating chaos, hate, misbehaviour, and injustice.

It is a matter of time before the laisse fairre economy, free market and reduced government role will bring about  oppression and misery on the people.

In many ways, we are still a traditionalist who believes God repays back the bad deed you do onto others on earth itself. Such wrath from God is still a gentle reminder.

Otherwise, we will face God in the hereafter on judgement day. That will be too late to repent. Our lifetime on earth is too short but that is the determinant of our hereafter.

For Azran, this could be a punishment for your arrogance: 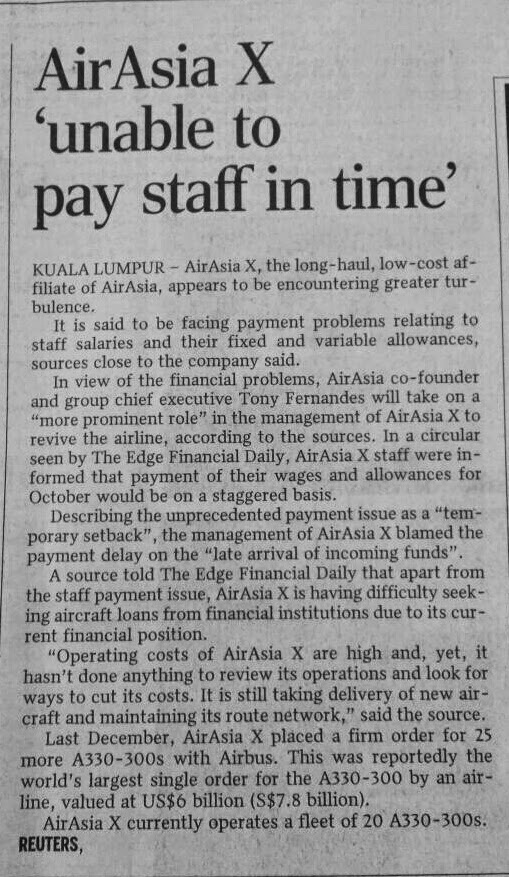 But it could be that God still loves you and wish to remind you to be humble to other fellow men for we are nothing in comparison to the Almighty.

He still has time to repent and return to the straight and true ways. The least he could do is to start with a common courtesy and lead a moral spiritual life.

Anonymous said...
This comment has been removed by a blog administrator.
1:39 PM

Can we assume that they are not paying MAHB, Mas Engineering, and EPF? The first bite to their cash would be AA in house suppliers ,contractors etc.

dont be surprised if he thinks hes greater than god..

From faraway land I kind of want to gloat at this botak heh! Wisely, I didn't.

That said, do this so called liberals ever believed in karma, I doubt it!

30 years living life first hand in the western world in different continents and I had my 4some golf buddies whom remarked "....you don't and never drink? Well you have not lost anything anyway!"

Hence, my take is the law of nature nicely come into full circle. "What goes around comes around".

Still I wish for this dude to fall back flat on this earth for that would give him time to ponder. If he is still game on anyway.

There are breed of Melayus that are "geli-gleman" with Melayus. To a point being apologetic and defensive being Melayus.

They tend to forget that they are there because of the yesterday seed being planted by someone else.

Maybe Anwar Ibrahim can help...all in the family..been there, done that...

If you are claiming to be privy to the thoughts of The Almighty, then He must be mighty displeased with MAS!

Anonymous said...
This comment has been removed by a blog administrator.
5:58 PM

So if you say that Azran might be punished by god for calling out Utusan for the racist & divisive paper it is, what about MAS?

Or is this a case of "God is punishing you but is testing me"?

Perhaps Mas can takeover their routes when they go PN17?

Did we explicitly say Azran is facing god's wrath?

It could be punishment or god's gentle reminder. So rba to pick a remark but not see it on totality.

As for mas, it could be punishment or gentle reminder. But to who?

What about the victims? If I know god's intention, I would have the answer.

Muslim believe in qada and qadar to accept event and spiritually used the event to always be reminded of our duty to god and be good.

In rukun iman, we believe in god, nabi dan rasul, angels, quran, hereafter, and qada and qadar. When one fail to believe in one, then some irresponsibly obsess to whack something out of context n without fact.