If anyone were to ask us as to what is the truth on the Protasco fiasco, frankly it will not be easy to ascertain with lawyers involved and reports made to authorities.

The deals are complex and many possible manouvers that it is difficult to explain in simple ways. Anyone can say anything. So who in the world will know the whole picture?

Nevertheless, it was the conduct of the Chairman and members of the Board of Directors that made us suspicious. So don't blame us if we seemed to be siding with Tey and Ooi. Their actions and decisions to favour Chong seemed questionable.

The fact that the Chairman is a Chairman on the advisory committee of MACC only makes it an attractive story.

When googling for news on Protasco, one thing noticeable is in the manner the business media are depicting the two young members of the Board of Directors of Protasco, Tey Por Yee and his associate Ooi Kock Aun.


They are being painted as two hungry young men showing no respect for the more elderly and composed Prostasco CEO Dato Chong Ket Pen. Not only the perception game does not favour them, the Company's or Dato Chong's side of the story gets visible coverage but not that of Tey and Ooi.

If Tey and Ooi were fraudulent in the deal they brought to Protasco, it still does not make sense as to why do they need to spent RM95 million to buy Protasco shares and then bring the deal to Prostasco?

They could do the deals themselves.

Till the full picture is known and hopefully the truth present itself, our suspicion remains on the manner the Chairman and Board conduct their affair.

So happen we had a copy of the November 3-10 The Edge weekly.

Except for the part on Chong looking for entry into oil and gas instead of being in a hurry to meet the year end deadline to get a buyer for the block, it gave a version of the background story on the current Protasco Board room tussle. 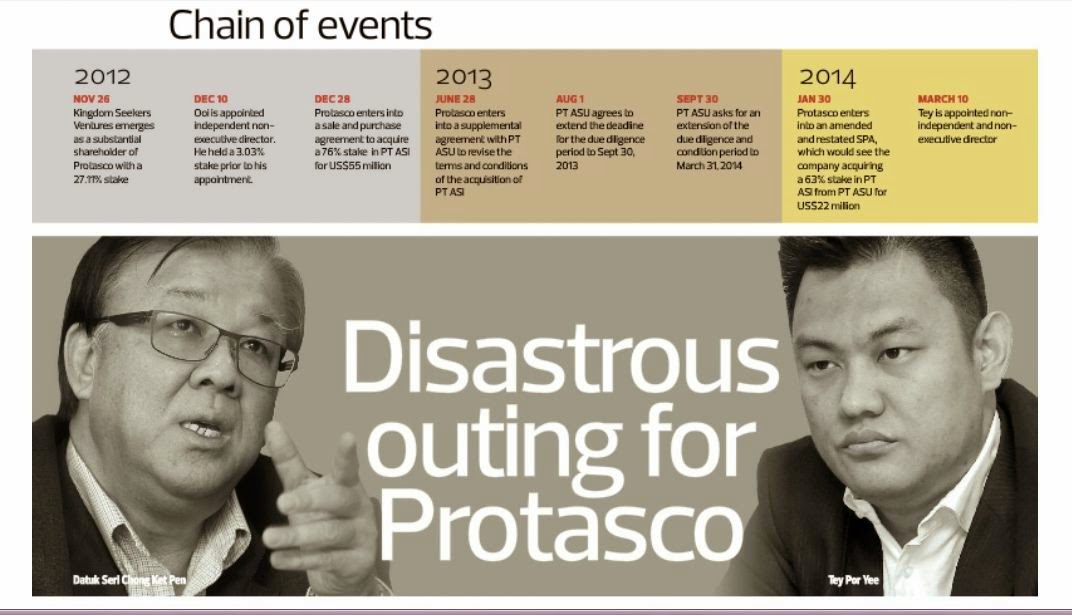 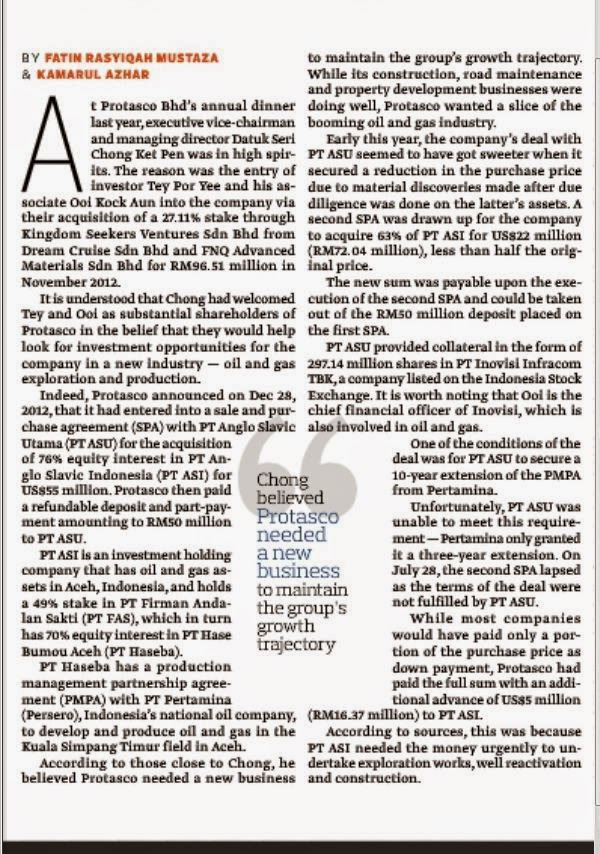 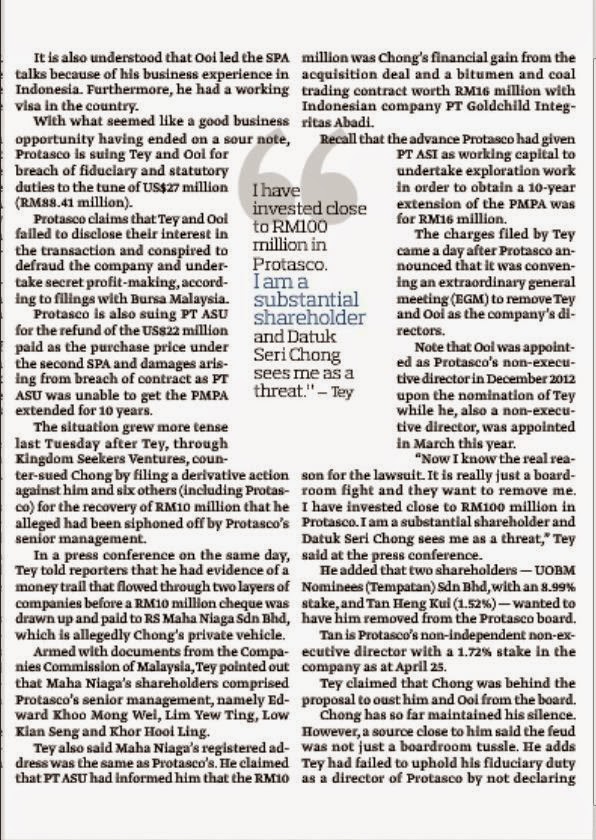 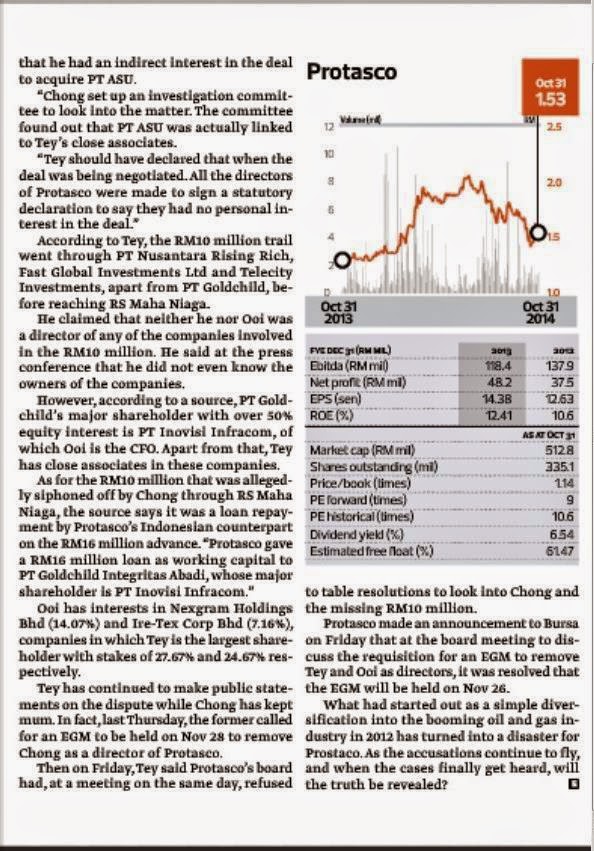 Did Tey and Ooi really tried to swindle money from the Company?

The question still remain: why the need to spend RM95 million first before allegedly swindling the Protasco's RM$55 million deposit? Quiet sure there is a smarter, less than obvious and more economically efficient way to do so, if the intention is to swindle.

In another issue but still linked to the Indonesian acquisition, The Edge reported Tey alleged that  RM10 million was siphoned out by channeling through several levels of company before reaching a company addressed at Protasco but "belonging" to senior management of Protasco.

No explanation was given except "a source" telling the Edge writer that it was to pay loan. Why go through 3 levels?

If Tey and Ooi had proofs to show some RM10 million was siphoned out, why did the Board of Directors refused to hear them out but brush them off as no proof presented in a later press comment? Do they wait for hundreds of million to disappear before taking action.

There is no majority shareholders in control of the company and Board, why do the majority of 8 independent members of the Board of Directors afraid to take the necessary precaution to protect the stakeholders?

It could mean the independent Directors are non so independent after all.Why are we naive?

The Directors were fast to file a lawsuit against Tey and Oi before hearing their explanation but refused to take the necessary precaution when it comes to the another allegations with some level of proof against Chong.

Unlike Tey and Ooi whose affairs in their deal with Protasco was well documented by the media, Chong had not explained himself.

Maybe he had privately explained himself to some Directors but till he officially explain himself to the Board, the Board of Directors seemed to presume Chong as innocent and Tey and Ooi were merely making a diversion charade.

Then there was a seemingly petty incident involving call for Board meeting but had it's own significance. The Board of Directors were playing corporate game then being serious about corporate governance.

This happened after the lapse in the agreement for the acquired Indonesian company, PT ASU to get extension of the oil rights for 10 years. They only got 3 years as reported by The Edge. It seemed fair to terminate because time has lapse.

But ... wait a minute! Isn't July the Indonesian Presidential election?

Surely nothing gets done till new President gets inaugrated in October. Yet, they are already squabbling by then. Doesn't that look strange? It is only fair to give them a bit more time. After all Chong delayed the execution of their early agreement by 2 years.

To the oil players, Protasco may have been too slow. When oil companies want something, they usually wants delivery yesterday.

Sorry for the diversion.

Getting back to the issue on calling for Board meeting, Chairman Tan Sri Hadenan had called for a sudden Board of Directors meeting on September 27th but Tey and Ooi could not make it. They had scheduled a family holiday and will only be back on October 8th. By right, they should have abandoned the trip.

But maybe not, since in their absence, the Board had appointed a lawyer and announced to sue them. This was done without hearing them out. If the case is water tight, holding the meeting on October 8th makes not much of a difference. Why the hurry?

After they returned from the family trip, Tey and Ooi made their appearance in court and denied the allegations. They then requested on October 23rd for a Board Meeting for October 27th.

This time Chairman Hadenan delayed them with various excuses given. He wants to be given something before agreeing to meet. One will be wary when the parties they sued to call for a meeting. He used his position as Chairman to secure advantage. As Chairman, he calls the shot on meeting dates.

By the time the meeting was held on October 31st, Tey and Ooi had already filed for a derivative court actions against Chong on October 28th and naturally, the Board refused to acknowledge their case.

The Malaysian Reserve reported below:

In addition, the resolution to suspend Chong until disciplinary action can be taken was also not allowed to be tabled.

Tey, who has made public accusations against Chong in connection with a failed deal in Indonesia, is seeking to remove the managing director via an EGM later this month.

However, last week, major shareholders of Protasco countered by calling for an EGM to remove Tey and another director Ooi Kock Aun scheduled for an earlier date.

“This Extraordinary General Meeting (EGM) that they have called is deliberately scheduled ahead of ours and will be paid by Protasco. They are trying to prevent shareholders from knowing the truth,” said Tey in a statement on Friday.

Tey claimed that Protasco brought in lawyers who made objections against the tabling of a resolution to suspend Chong. He also alleged that the board then called for an EGM to remove him and Ooi two days ahead of the one sponsored by him to remove Chong.

Tey has called for an EGM on Nov 29, 2014 which he is funding himself with the purpose of presenting the facts and evidence of Chong’s wrongdoing directly to the shareholders and to ask for the removal of Chong.

If both side of the disputing parties have issues that could affect the interest of company, shouldn't the Board of Directors take the precaution to suspend Chong?

Tey and Ooi had called for an EGM for November 28th. Then the Board made a move to call for an EGM on November 26th earlier by two days. Clearly the Board looks to be playing Chong's game.

Maybe till the matters are cleared, the shareholders should just remove all of the disputing parties from the Board of Directors. However, without any major shareholders running the show, who will take responsibility for running the Company?

The Board of Directors as in Board managed? Their impartiality is suspect.

Anyway one look at it, something ain't right when the elderly Chong made the first move to file a lawsuit to end the failed deal. Maybe he has something held close to his chest.

But if they could renegotiate the Sales and Purchase agreement, couldn't they end the deal amicably? Why did Chong resort to make the first move to undertake a lawsuit? It will only ignite an open corporate war.

Surely it is not about fiduciary duties as reported by The Edge. It is difficult to swallow now when he himself is suspected of funneling money out in a strange and suspicious manner.

According to Tey and  Ooi, this is a cover-up [read back Bigdog here]. We will wait for more development. More will be coming out anyway.

Surprise me why Chong too generous to disburse the money when whole exercise not completed yet.

2 years to complete exercise? Why so lambat? Due d cannot be so long.

Sure got game going on here. SC, SPRM and Police must investigate.

We are not born yesterday to not to know that when Tey and Ooi negotiated with Chong, they must have things mentioned and agreed but not mentioned in the shareholders agreement.

Something was not working out so it became a case of you reveal me so I reveal you.

So why did Chong made the first move? Cover up or didn't get enough?

Cannot be so righteous to protect shareholders, fiduciary duties and company la. Aiyeah where got businessman so honest one!!!

Tey and Ooi filed a court action agst Chong and dare to meet the Board of Directors. There is no excuse of them avoiding the BOD meeting.

Chong filed a lawsuit agst Tey and Ooi but did it behind their back without first confronting them in a Board of Director meeting.

Chong and the BOD looks devious and coward. They refused to hear Tey and Ooi.

Based on this, it makes Chong look suspiciously guilty of something?

He must explain his stand