Pursue the right culprit on the Protasco fiasco 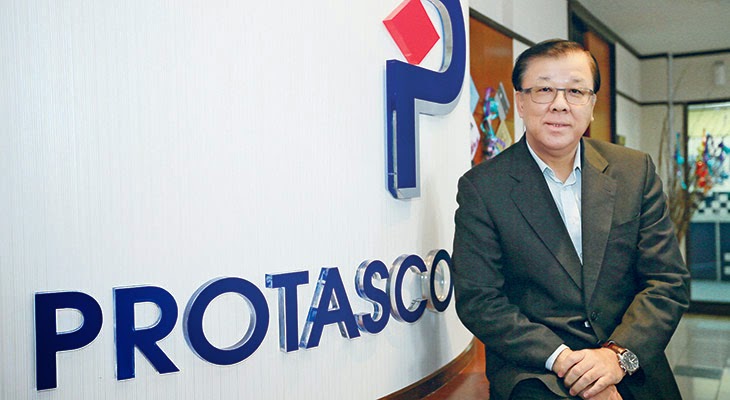 A posting from a blog in our bloglist, Corporate Governance in Malaysia recently [read here] caught this blog's attention to the Protasco boardroom tussle.

The blog raised the issue on the transparency of the dispute. The Edge, KiniBiz and The Star are actively writing on the mud-slinging between the parties linked to CEO Dato Chong Ket Pen and parties of Tey Por Yee and Ooi Kock Aun.

Details are being revealed and some information have yet to confirmed. By the look of things, the Tey and Ooi side of the story is not heard much.

Anyway why the revelation by Dato Chong now and not then? The blog had raised the issue way back in 2013 to question on the company's ability to pursue the oil rights to develop and produce the  field in Indonesia [read here].

Dato Chong alleged that the parties of Tey and Ooi have cheated and swindled some money. In turn, Tey and Ooi claimed to have done money trail that lead to Dato Chong taking money too. However, this usual dispute in Malaysian corporate scene has taken a new precedent never happened before.

There will be two EGMs within the span of two days on November 26 and 28th to sack each other off as Directors. It is fodder for speculative play on the company's shares for those privy to the outcome.

Bigdog has taken a keen interest from the angle of the impartiality of the Chairman, Tan Sri Hadenan Abdul Jalil. In his posting late last night, he highlighted that Hadenan sits on the Board of Directors of the prestigious Maybank and is a Chairman on the Advisory Committee of MACC [read here].

One party, believed to be Ooi have made a MACC report against Dato Chong. Hadenan is seen as siding with management. Isn't it interesting?

More interesting is someone left a link on Bigdog's blog to a newly established blog, Right To Be Heard. It could be anybody since it hardly made much comment.

According to Dato Chong's version, sources said Tey and Oi came to him to invest in Protasco. They introduced him to an oil deal in which he do not know much details. Now two years later, he said they had cheated him and the oil project is a scam.

Naturally, there are lawsuits and throwing the two out is an immediate step.

The link in Bigdog's blog was linked to copies of Sales and Purchase Agreements of the oil and gas deal and Shareholders Agreement dated November 2012. In all the agreements, Dato Chong's signatures can be presumably seen.

Unless it was forged and police reports have been made, how could he claim he do not know much? Don't tell us that a public listed company did not do a due dilligence and hire experts to verify? That is a dodgy claim, isn't it?

From calls made to several stockbroker friends, Tey and Ooi could likely be approached to buy Protasco shares from a major shareholders whose getting out in total from the company and giving the stewardship to Dato Chong.

It was known then that the offer to Dato Chong to arrange a buyer and take control of the company was not forever. It may have ended somewhere near the end of 2012.

One aspect of the story that does not make sense is for Tey and Ooi to spend more than RM90 million to buy a minority stake in a company when they have strike black gold in Indonesia and should have used the money to undertake the production.

The Shareholders Agreement seemed possible. It is logical to have Protasco buy over the rights from the Indonesian to pursue the business and the two buys the shares to come on board.

Presumably the Sales and Purchase Agreement of the oil right comes with a Board of Directors' approval and an EGM to undertake such a major investment. Many PLCs as far back as the 80s have terlungkup because of oil and gas exploration.

Dato Chong would not have made the decision on his own. If there is none, Dato Chong deserve to terlungkup. All the razzmatazz from his side on Tey and Ooi could be to cover-up his tracks by removing them from the Board and cancel the whole deal.

It could even be a ploy to have the offered shares parked to some group till he could find another friendly group or he raised some money to buy it. Tey and Ooi's shares can be dealt later. Wonder whether Bursa or SC can see the suspicious going ons?

Although we are not quite sure yet, we are suspicious. It will be something interesting to pursue than pre-PWTC commentaries on UMNO.

The issue of who cheat and swindle money will be for the police to pursue but with a complex corporate deal like this, will the police be able to understand the sophisticated financial transaction and fine legal intricacies?

They could just take the easy low hanging fruits to charge one party with a misdeamenour but left out the bigger trunk of an offense. Easy to make a case or close it up.

It will be sad should the real big culprit get way free. This is about honesty and integrity. The public bought shares on expectations of return on an oil strike. It will not be fair if it turns out to be a mere ploy or con job.
at 11/16/2014 05:02:00 PM

The other major shareholder of Protasco are Doris Chia and Dato Ibrahim.Both of them are linked to Tun Daim

Another mess caused by Tun D. Will Najib be blamed again.

Was he and Dato Chong at loggerhead? Tun D wants to pump some assets in but Chong do not want to be diluted. Could it be it is a case of you buy me out or I buy you out?

One possibility would be Chong does not have the money and offer about to lapse so he was willing to take in any tom dick and harry and agree to any deal first. Then renegade on the deal till he could get another buyer.

One interesting thing is how did Chong get the money to own 22%. That is more than RM100 million. He was merely an Engineer from JKR till Tun Daim took him in to lead the company.

A Voice should find out more of his background. Do ascertained as to how he build the company till listing and further on. How did he got the money to amass more than RM100 million worth of shares?

All this happening right in front of the very eyes of an MACC Committee Chairman.

If Tey and Ooi had done money trail, it means Chong should not stay on.

He should be suspended for investigation to take place first and be relieved of his position till he is exonerated.

If the oil and gas deal is bogus as claimed by Chong, have they done the due diligence?

Better still, did they audited the companies to be taken over?

Due diligence is up to the terms set by management. You know and I know, it can be manipulated.

With both parties at each other, then it needs really independent parties to do it.

I received Chong's version of money trail in the post. Who to believe now?

Chong provided trail of what? His "verbal trail", again in "verbal"b come on lah, lie so much still lying. Can't even show evidence. Fly kite!

BOD did not want to listen and do an investigation despite them bringing proofs.

They said lets settle it with the police and court since it is already there.

Tey and Ooi have made filing in court so there must be something.

Nih , hal cerita all in the family.

hutan. Thanks to dasar pemimpin

Tey and Ooi come to Chong？ Chong search for investors and found They and Ooi sounds make more sense. The start of story by Chong already doggy.

It should be noted that all this while the Protasco board (the innocent members of the board that is) thought they were dealing with Indonesian companies and businessmen.

Tey Por Yee was allegedly arms length away from the deal. His only interest or so he was to lead the board to believe was with Protasco benefiting from the deal.

You could find out more from here https://bursasyndicate.wordpress.com/

Tey Por Yee was allegedly arms length away from the deal. His only interest or so he was to lead the board to believe was with Protasco benefiting from the deal.

Now back to the PT Inovisi shares pledged for the deal. These shares were in the name of Acclaim Investments, a company registered in the BVI with a paid up capital of US$100.

It has now emerged that Acclaim Investments was set up in 2009 with just two shareholders. Guess who? Tey Por Yee with 85 shares and his sidekick Ooi Kok Aun with 15 shares.

CHONG KET PEN that con man was not like this according to his old friend. Greed turns him into animal. Here is another discover by journalist who fancy Bursa Malaysia fantasy. http://protascopolicescam.blogspot.com/

The directors are being used to support Chong's lie, and one of the big wig Ibrahim ran like a rat before Chong sheet shoot up the roof. Some shadows were also being cheated lending their hands to Chong, all got burnt and shocked by his lies.

More journalist are putting up their discoveries to public.
http://www.rockybru.com.my/2014/11/the-hadenan-poser.html https://protascosue.wordpress.com/2014/11/19/precedence-advantage-protasco-version/