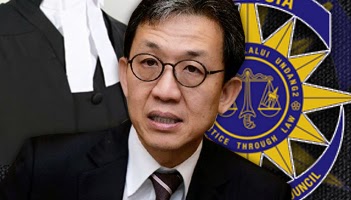 We were out of town all weekend and missed this Saturday news.

Bar Council President was rapped by 100 lawyers for making irresponsible remarks unbecoming of his position. He then tried to hid himself behind Ambiga's saree.

The group of 100 lawyers rapped Leong for misleading public on past prosecution for sodomy and demanded an apology. [FMT report here]

Full statement of the group below:

We, the G100 who have issued the Press Statement dated 21 February 2015 against Mr Christopher Leong’s Press Release of 11 February 2015, refer to the recent Press Release dated 26 February 2015 issued by the president of the Malaysian Bar, which was entitled the ‘Bar is Pro-Rule of Law and Justice, Not Pro-Opposition or Government’.

Although a large part of the recent Press Release is on Tan Sri Shafee’s interviews and roadshows on the Federal Court judgment in Dato’ Seri Anwar Ibrahim’s (DSAI) case, some parts of the press release also made indirect reference to G100′s Press Statement, which warrants clarification.

Before we venture into the needful clarification, we wish to place on record that certain questions raised by Mr Christopher Leong with regard to the continuing conduct of the public prosecutor in the DSAI trial, outside of the courts, are supported by G100 and we shall await the authorities to decide the relevant course of action, as they deem fit.

However, with regard to the G100 concerns, it is noted that in Mr Christopher Leong’s first Press Release dated 11 February 2015, there were allegations that the law used to charge and convict DSAI, twice, was “rarely used”.

It is also noted however, that in his second Press Release dated 26 February 2015 he now acknowledges the statistics from the Attorney General’s Chambers that charges under sections 377A and 377B are not at all that rarely used, which showed hundreds of cases for sections 377A and 377B and even demanded further statistics for the period prior to 2009.

Mr Christopher Leong was wrong in the first place to mislead the public that it was rarely used and therefore should gentlemanly admit to and apologise for the said error.

In relation to the law, Mr Christopher Leong previously questioned why Saiful was not charged for abetment under section 109 read together with sections 377A and 377B of the Penal Code. This according to Mr Christopher Leong creates a perception of there being persecution against DSAI. We have highlighted that under sections 377A and 377B, the only offence is the act committed by the penetrator. Thus only DSAI could have been charged for that offence and it is therefore preposterous to even suggest that Saiful should be charged for abetting a crime which he could not have committed as not being the penetrator. This should have been clarified by Mr Christopher Leong.

Nevertheless, in the new statement, Mr Christopher Leong is now attempting to wriggle his way out by arguing instead that Saiful should be charged under section 377D of the Penal Code which is obviously a clear departure from Mr Christopher Leong’s earlier stand.

It is disheartening to see that Mr Christopher Leong is now arguing on different grounds and still not admitting he has made an obvious mistake in scandalising the courts. His first statement of the 11th was clearly made in reference to the judiciary. Many who had read it also clearly believed he had referred to the judiciary.

For example among the public comments following his statements at The Malaysian Insider are as follows (see http://www.themalaysianinsider.com/malaysia/article/glaring-anomalies-fuel-perception-of-persecution-of-anwar-says-bar-chief):


“In the midst of all the commotion yesterday, I happened to see a photograph of five men wearing strange looking costumes and names with dubious honorifics added to as prefixes. They all looked more like clowns or court-jesters!!!”

“The FC judgement is as predictable as Monday will come after Sunday….”

“Yes, why only Anwar was found guilty for sodomy under Section 377A and 377B when both were participating in the act as stated in the court judgement? ….

The judges cannot run with the hare and hunt with the hounds. The word “whosoever” covers both the sodomiser and the sodomised but clearly one was sent to jail and another is free. Didn’t the judge say that consent is not necessary? If this is not an clear act of persecution and proof of the judges’ bias, I don’t know what is.”

“It seems like the judges behaved like horses with their blinkers on and charged Anwar without looking to the left and right of the offence….”

These are all public comments from readers of his statement. Mr Christopher Leong knew or ought to have reasonably known the effect of his statement would bring the courts into disrepute, and without doubt it has. He has a duty to defend the judiciary from being scandalised without basis.

Further, Mr Christopher Leong has yet to explain in what way his statement was not intended to refer to the judiciary as he had clearly said DSAI had been prosecuted and CONVICTED twice and the statement clearly had involved the judiciary in that DSAI would not have been convicted but for the involvement of the judiciary.

This is not “pro rule of law or justice”. The judiciary has not been served fairly and with justice. His duty was to clarify the decision based on the written judgment, and not to try the case by media, which he did instead.

We do therefore, reiterate our call made in our first press release dated 21 February 2015 namely to demand that Mr Christopher Leong, as President of the Malaysian Bar, immediately retract his Press Release of 11 February 2015, and tender a public apology to the judiciary in respect thereof and communicate the same to all international bodies and entities. 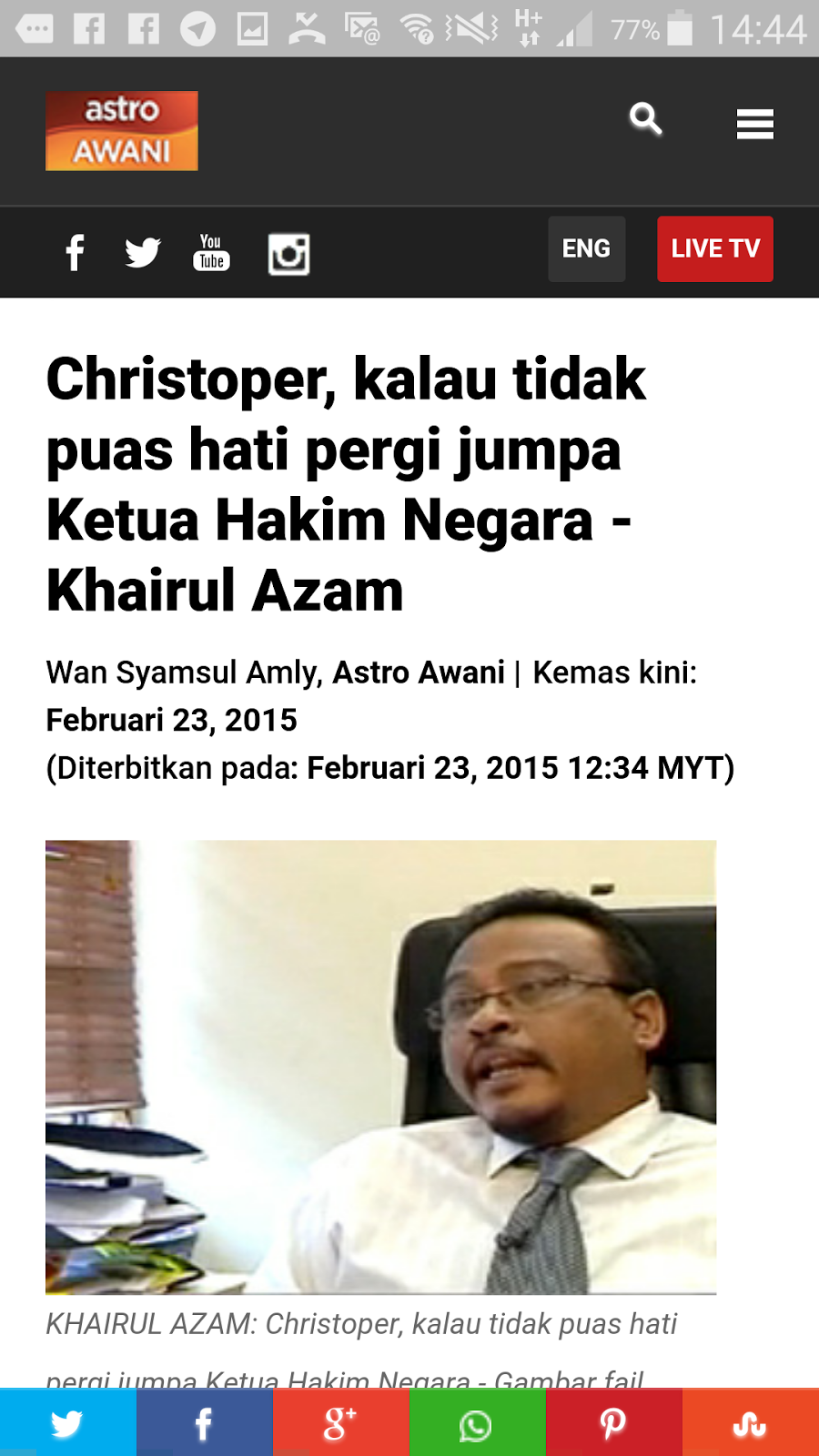 Earlier, lawyer Buzze Azam advised Chris Leong to bring up his grievances to the Chief Justice albeit in the proper legal manner which he is supposedly accustomed with and should he be professional enough.

By the way, this group of 100 lawyers is an ad-hoc group gathered for this issue and this issue alone. One of the named lawyer, one Jehan Abu Bakar proclaimed herself out and had not given her permission to be in the 100.

She made a commotion for this miscommunication. [read the Malay Mail Online here]. Her departure is not a lost cause for she have been easily replaced.

It was a mistake to have taken this less than intelligent being. She is an anti-Lynas activist, thus naturally not too smart with her chemistry; rear earth are not radioactive elements! 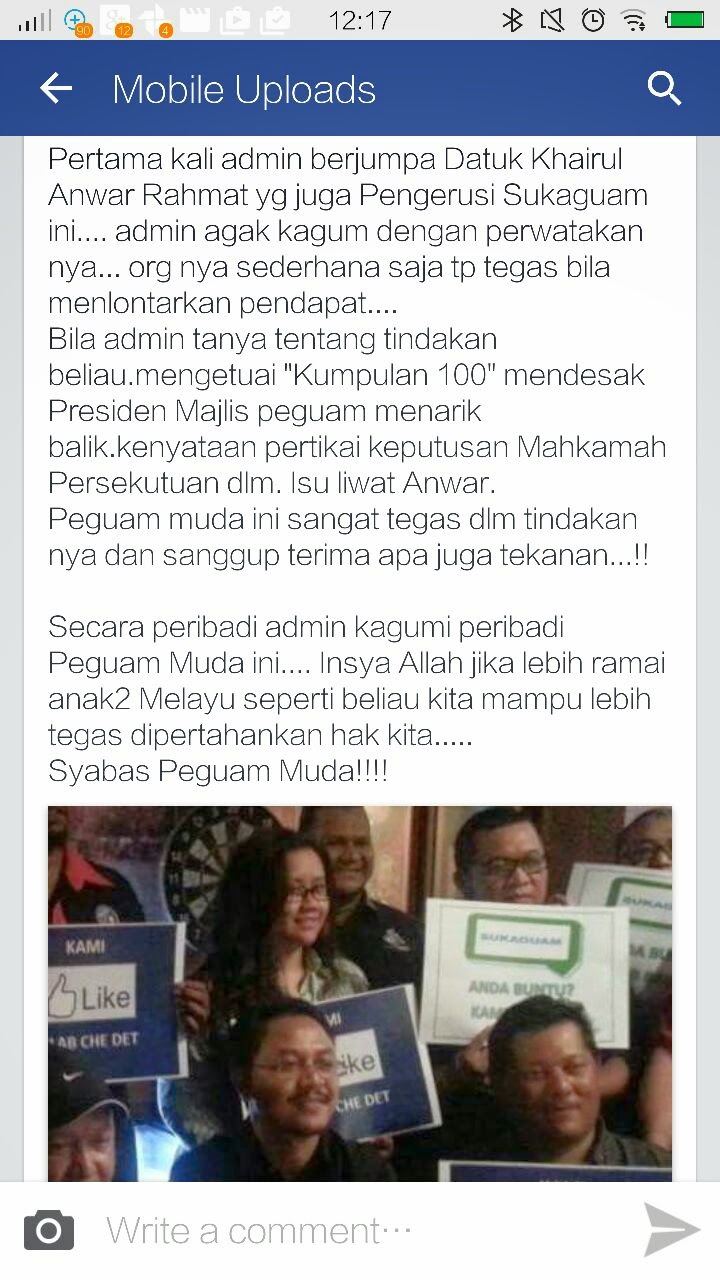 One lawyer, Khairul Anwar Rahmat of SukaGuam or a Biro Guaman claimed to be part of the group and have been making statement as though he led the group of 100. It turned out he did not even signed his name in. [Read Malaysiakini here]

This Bureau is the initiative of Dato Razali Ibrahim? Hmmm ... apa ini UMNO, still tak berubah lagi? Hijacking other NGO and indviduals effort and claiming as their own?

We make love, you make love.. both gembira...no problem

I banged your rear and you are happy .. willing partner, mutual benefits. Legally if one party is guilty, the other is equally guilty. Reason, both adults consented to each other before the banana is inserted into the rear hole. The judgment is flawed, political and dirty to the core. It's as simple as that.

Get your facts right dude. In the on camera part of the trail, saiful said no and anwar got angry.

A no is a no. That is what you faggoty liberals kept telling the government but you hypocrits don't do as you say.

Since you are tryin to be legal, read back 377 a couple of hundred times. So you understand those words. Volunteer applies to the poker and not pokee.

In all of this, Anwar never denied and defend himself in court but made the unjustified and undefended claim of conspiracy.

So who the duck are you? Another of anwar's homo lover?????

Now one partner screamed foul when it's not his first nor the last to enjoy the lust of having amorous relationship.

What kind of low class law is this when only one party is being convicted guilty and jailed and the other free of judgment. Ya, Malaysian feudal law of course.

Who said "consented to each other"? You must be skewed and groggy commenting at past midnight.

Only the Oppo Hippos say "The judgment is flawed". And Leong didn't even read the written Judgemnet before commenting. What kind of a Bar Council President is that?

Probably before the president of the bar made the statement he was in a bar?

"Extemporaneous speaking should be practised and cultivated. It is the lawyer's avenue to the public. However able and faithful he may be in other respects, people are slow to bring him business if he cannot make a speech. And yet there is not a more fatal error to young lawyers than relying too much on speech-making. If any one, upon his rare powers of speaking, shall claim an exemption from the drudgery of the law, his case is a failure in advance."

- President Lincoln on the foolhardiness of the mouth

The Bar Council is an iconic body of respectable and honourable lawyers who are charged with safeguarding the interests of themselves and the Rakyat. The moment they indulge in politics, at least 50% of the Rakyat will hate them. It is better for them to promote the up-dating of our antiquated laws so that the Nation is proud to have laws in keeping with the rest of the World !

If it's not consented, why should it be reported that they have more than one blissful bodily contact. If is not for fun, what do you call it then.

Did I read that the Bar Council Annual General Meeting and election of office bearers was usually attended only by a few hundred of the 15,000 members?

And that there was an occasion in the past when they could not even get a quorum to start the meeting which was then postponed.

Why is it then that no attempt has been made to get the non-politicizing members take over the Bar Council?

They have often been accused as being political. Oppositional.

Leong and his kind are aware of the existence of "backers of second legal body."

They will fight without fear or favour, said he. And expects "Most brutal fight" at March 14 Bar Council AGM,
FMT Reporters said.

The Bar Council will have a fight on their hands with the "proponents of an alternative Bar Council".

Last Sunday the Malaysian Volunteer Lawyers Association accused the Bar Council of being part of “anti-establishment politics” and proposed an alternative body to run parallel to the council.


That Leong talked about “glaring anomalies” in Anwar’s prosecution, Anwar’s case was a "political persecution rather than a criminal prosecution." He sounded like nothing-is-right DAP loud mouth Lim Kit Siang.

The group of 100 lawyers calling itself G100 demanded that Leong apologise and retract his statement. Others have also called for an alternative legal body and accused the Bar Council of being pro-opposition.

Claiming the Malaysian Bar as "independent”, he must be told that many have seen what former President Ambiga and other members joining Bersih illegal assembly before the Peaceful Assembly Act and came under the armpit of Anwarul Al Juburi (pangkat Mat Sabu beri).