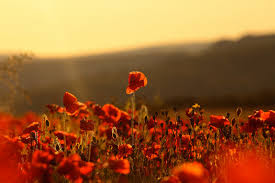 One observation of the current political narratives in Malaysia is that public is not clear in what they want.

They make demands, but when it is addressed, they forgot the original demand and change to a new demand.

They forgot their demands and got lost in current affairs or propaganda.

It could be a reflection of political immaturity. Politics as in governance and public policy, not partisan exchanges Malaysians wrongly associate politics with.

Or it could be some deep imbedded problem inside. 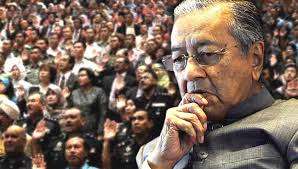 For instance, Malaysians used to express uproar towards privatisation, especially Independent Power Producers (IPPs) for causing rising tariff on electricity and gets translated into rising prices.

Privatised highway toll and energy were the underlying reasons that started the escalating cost of living. 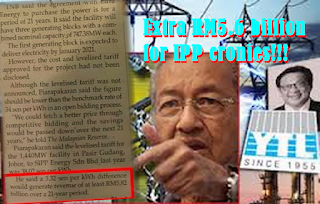 IPP was seen as daylight robbery - land and PPA came from TNB, cheap subsidised gas from Petronas, financing given by (or forced upon on) Banks, power generator and equipments from ABB or other few suppliers (with Tun Dr Mahathir's proxy, Tan Sri Arumugam as agent cut) and management by ABB.

When Mahathir instigated the public with the 1MDB using slanders, fabricated news, manipulated and wrong figures, and wrongful accusation, they forgot about IPP.

1MDB was meant to address that problem. 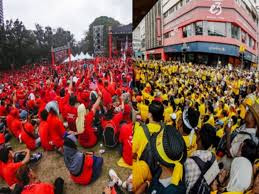 One can recall also of public demanding more civil liberty and freedom of expression. There was uproar with abuse of power and judicial oppression.

It was Tun Abdullah and more Dato Najib that heard their call. 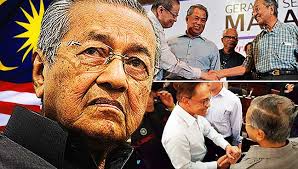 But now they are likely to bring back dictatorial and draconian leader, Tun Dr Mahathir. The description came from Lim Kit Siang, Nik Aziz, Anwar Ibrahim, and his current associates.

There is likelihood he wants to return as Prime Minister. It is heard he lost fate with Tan Sri Muhyiddin and Dato Mukhriz.

His choice, Dato Azmin Ali may not likely survive an incoming political onslaught. A possible prosecution on Adam Rusly for money laundering from corruption will be the start of the avalanche. 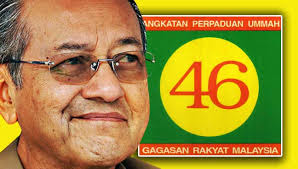 The Semangat 46 supporters knows extensively and with clarity how Mahathir compromised the Malay interest and prostituted the National Economy Policy.

They will not forget what he did to LPN, UDA, PERNAS, Industrial Coordination Act, and amendment to Education Act.

The most ironic was he completely destroyed and robbed the legions of corporate Malays he created himself. 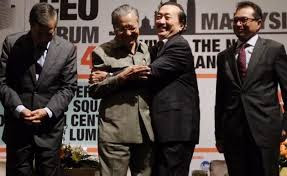 But he preserved his Chinese, Indian and foreigners proxies and cronies, including underworld linked characters.

Yet, many conveniently forgotten out of political expediency what happened and accept DAP which was anti-NEP and strong opponent to Article 153.

Their brains failed to function.


The alliance with DAP will NOT help get back the over-subsidy handout made by abusing Article 153 in the past for Mahathir's political survival. 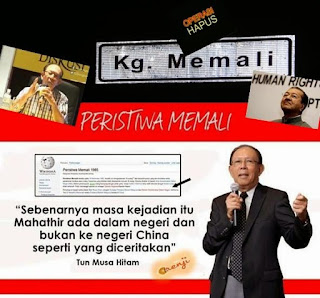 Not sure whether PAS has soften their heart with certain faction wishing to work with PPBM.

It was Mahathir's deep-rooted hatred for PAS and traditional Islam that made him allowed the Memali incident (which for decades he accused it on Tun Musa Hitam).

There was also complaints of leakages in the system and thriving underworld business that contributed to rising prices and monopoly.

Come GST, which was to address the problems, Malaysians conveniently forget.

It is not a memory problem but insecurity that witheld them from being rational. 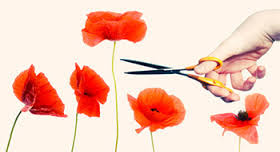 Thought it is a case gullible Malaysians that easily forget what they use to ask for or do not really know what they want.

However, one message received claim Malaysians is suffering from Tall Poppy Sydrome. NST has an article recently:

WE sometimes have a strange way of reacting to success stories of our fellow Malaysians. We are also quick to shoot down any dare-to-dream ambitions.

In the recent incident of the viral video interview with Natasha Qisty Mohd Ridzuan, who scored 9A+s in her Sijil Pelajaran Malaysia (SPM) — we all read how she was subjected to a torrent of humiliating attacks online for speaking Malay with an English accent.

On the other hand, when Faiz Subri won the Puskas Award early this year, the comments on social media condemned his lack of command of English.

If there was news on local education achievements on the Internet, there would be at least one comment downgrading our education system instead of recognising the scholarly attainments.

A constructive criticism is when advice is given with good intentions because they want to see the person grow and prosper.

The vindictive comments shared online — like those about Natasha or Faiz — sometimes sound as if they were made just out of spite to tarnish credibility or keeping them down.

The Internet makes it easy for trolls to hide in the shadows. It drastically increases the ability to shut off the empathy virtually, allowing them to emotionally divorce themselves from people they don’t like and those they don’t know.

There is a term used to explain Netizens’ reactions. It is called the “tall poppy syndrome” — a phenomena of a social culture commonly identified in the United Kingdom, Australia and New Zealand.

Poppies are beautiful flowers that stand tall from other flowers. A tall poppy is defined as a high achiever who stands above the crowd and the backlash. The tall poppy syndrome is the reaction of those less successful to “cut down” what they think as an ostentatious conduct or display of behaviour to normalise these successful individuals.

Perpetuating the tall poppy syndrome is like cutting down achievers for no other reason than to mask one’s own shortcomings and insecurities.

These sorts of social psychological processes — perhaps symptomatic of social injustice, economic disadvantage or disenfranchisement — are likely to occur in many social groups, including businesses, politics or even the school environment.

Some argue that the tall poppy syndrome is not broad resentment at other people’s success, but is rather a levelling social attitude, an attempt to deflate the pretensions of those who flaunt their success without due humility.

Do you think we have a tall poppy syndrome going on in our country? The more I read about it, the more familiar it sounds, similar to the online attacks.

The danger of this tall poppy syndrome is that it would lead to a culture of resentment, indirectly striving to celebrate mediocrity while putting down successful individuals and even ideas.

For Australians, it is said the syndrome is rooted in their culture; it had ruined the success of creative and energetic people and in the long run, hurt the economy.

A research has found that Australian high-performance school-age athletes became victims of the tall poppy syndrome.

It revealed that these female athletes — competing at national and international sports events — were bullied at school about their sports achievements by less successful students. Findings indicated that the bullying had resulted in a detrimental impact on their school life and wellbeing.

It is quite common for us to identify the traditional patterns of bullying in school environments, which are usually of vulnerable children, such as those who had few friends or poor body image.

But, there is also the likelihood of victimisation even among high achievers, who might be ostracised or alienated by their peers. I won’t be surprised if similar bullying takes place in our schools and may affect more students.

When those high achievers are victimised, the negative consequences can be magnified. This could be because they had more to lose or, perhaps, because they were more unsuspecting victims. High-performing pupils can experience more depression, anxiety, anger and social marginalisation as the result of bullying.

We have taught our children, generation after generation, about how to be street-smart. In this digital age, parents and teachers require a greater awareness about tall poppy syndrome behaviours, and teaching them to handle cyber-bullying as well as digital empathy. Schools should promote an anti-bullying culture that includes resilience training for talented individuals.

​Things might still be fragile in our education system and there is more work to be done. But, it is also vital to recognise the achievements of Malaysians. We need to protect the tall poppies who deserve their high status because they may do so much to promote the advancement of our country.

**The writer left her teaching career more than 20 years ago to take on different challenges beyond the conventional classroom. As NST’s education editor, the world is now her classroom.

Malaysians may have the tendency to only pay attention to what they want to hear and not the full picture on issue including the plus and minus, positive and minus, and side effects and compromises need made. 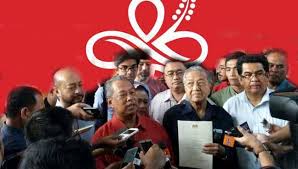 Tall Poppy Syndrome is described in Wikipedia as:


The tall poppy syndrome (TPS) is a pejorative term primarily used in the United Kingdom, Australia, New Zealand and other Anglosphere nations to describe a social phenomenon in which people of genuine merit are resented, attacked, cut down, or criticised because their talents or achievements elevate them above or distinguish them from their peers.

Australia and New Zealand’s usage of the term has evolved and is not uniformly negative. In Australia, a long history of “underdog” culture and profound respect for humility in contrast to that of Australia’s English feudal heritage results in a different understanding of “Tall poppy syndrome”.

It is also known as "the politics of envy".

In a 2012 editorial in The Australian, the politics of envy "to turn the national political debate into a class battle by attempting to set the battlers against the rich."

It became a national concern as TPS is threatening the ethos and economy of the country.

Australia has such problem but there is similarity with current happening in Malaysia.

The similarity is clear as one hears similar style of arguments by Mahathir but the same critic is applicable to himself. It was intended to invoke the TPS within Malaysians.

One may have hears how non-sensible the arguments in their comparison.

According to studies done at Flinders University of South Australia and published by Australian Journal of Psychology in 1989, those with TPS tend to be those unable to put high priorities on the aspects needed to achieve success.

This seldom happen as a result of parental focus on child's weakness and punish them instead of looking at the child's initiative and strength. The child grow up to repeat the same. It is a way to lessen their disappointment with themselves.

It closely resembled Mahathir's endless ranting on Malays weakness and at the end of his term, he called Malay forgetful.

The Malay is the "child he nurtured in such negative manner ended growing up being in-denial and support him by blaming others and living under his "vision" shadow.

Not only Malays, Mahathir inculcated within Malaysians with TPS for him to manipulate them later.