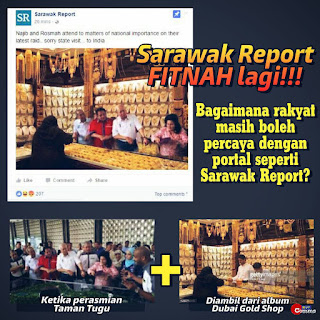 For the past few postings, blogger Bigdog have been growling over use of fake news in opposition political campaign, specifically Tun Dr Mahathir's PPBM.

Initially, he ranted over an Australian-based Malaysian ex-reporter for inability to back the spin in his blog here that Petronas President, Dato Wan Zulkiflee attempted to sabotage the Aramco deal.

The Keling tried to divert government-side attack of economic sabotage on opposition with a lie.

Sarawak Report assisted with another diversion on a big data company. The response by a close associate working in the company was simply, "Bollocks!"

Again, the compulsive liar orang putih was caught publishing fake slanderous pictures of Datin Seri Rosmah in India and made the ridiculous claim of a RM30 million "contract" to murder Hussain Najadi.

Hope blogger friends on the other side still clinging to Mahathir's past learn the Malay words, malu, segan, dan bermaruah by now.

Immature politicians on this side seeking cheap publicity, photo ops, and hijacking others' effort need lesson on malu, segan, dan bermaruah too!


If not for yours truly was not up to it, the temptation last week was to raise issue with a politician claiming credit for a major endeavour into Malaysia.

Surely a 15 minutes audience could not be the decider. At least, he admitted and apologised as he desperately needed the attention to remain a candidate for next GE. 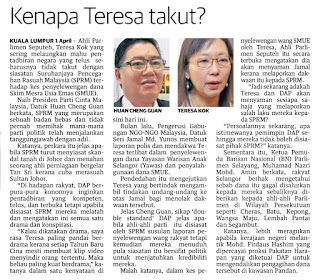 Several months ago, another politician dramatised himself out of a precarious position, in which the Minister concerned warned it cannot be done.

Many were furious to see the publicity crazy politician threw the PM's name, broke protocol, and disrespected the sovereignty of another country for his selfish reasons.

It embarrassed the country, which was in the midst of an important role in a multilateral effort.

Could be at it again because it makes no sense for media to report a Ministry being directed to work with a non-government outfit. At least, the deputy has a role to be clown.

The incident few months ago should not become the basis to not acknowledge his past contributions.

But he need to realise that it is contribution to his constituency that matter most to stay in office. Not too mention, there are angry Division leaders throughout the country seeking for his hide.

It is still a friendly advise, and not as bad as an incident involving injured people. 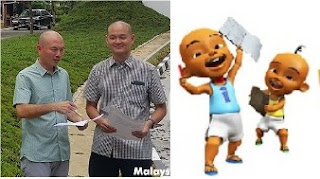 There was an accident in the high seas. Fishermen nearby came to the rescue and took the injured into their boat.

Then suddenly a Minister turned up with the police. He got wind of the incident and requested to be taken there. Suddenly the Minister directed police to take the victims into their boat.

The plan was to transport them to a further port which he already gathered reporters. It is a potential front page story and publicity for himself.

The police officer refused and insisted the victims be taken to a nearby port. The priority is to seek medical treatment.

The Minister relented but he jumped into the fishing boat. Along the way, he still insisted to go for the port with reporters waiting.

Good thing the fishermen had better sense and resisted. The priority was the injured.

Guess what happenned, the Minister got the gathered reporters helicoptered to the destined port. Done at the expense of public money!

It is old school politics and out-dated thinking.

Nevertheless, performing artistes, circus animals, and politicians need publicity and popularity. But do it tastefully and sensibly.

By right, it is their performance that matter. Politicians with malu,&segan, dan bermaruah character understand that rising to the top need merit.

The country should be led by capable hands and not publicity seekers. The situation is still not too bad and acceptable politicians antics. 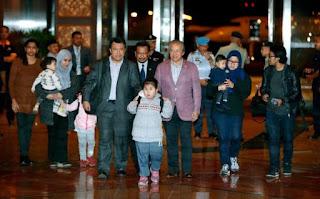 If the early morning arrival of Embassy staff and family from Pyongyang was intentionally delayed to make way for a Minister's photo-op, it would have been the pinnacle of political stupidity and selfishness!

No such thing happened as it is on time and acceptable for Foreign Minister to receive his Ministry's staff.

Early morning arrival is not publicity, but a sense of responsibility.

The intention behind actions and reactions in international diplomacy can be beyond the comprehension of most politicians.

Certain intricacies and sensitivities is best not be made known to others. Several years ago, a politician's desire for publicity became the deal breaker that resulted in the imprisonment of Malaysians.

However, Lim Guan Eng's insistent to politicise and call to close embassy immidiately shows lack of wisdom and inability to run a country.

Solve the flood problem as promised within 8 months first and submit the Penang tunnel consultancy report! 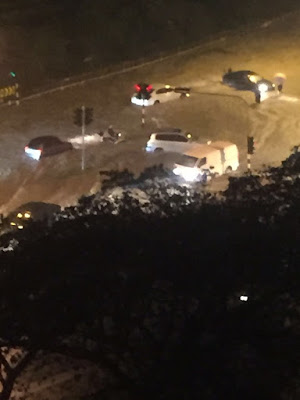 It embarrassed the country, which was in the midst of an important role in a multilateral effort.'

dan yang ini: "But he need to realise that it is contribution to his constituency that matter most to stay in office. Not too mention, there are angry Division leaders throughout the country seeking for his hide."
Ini satu lagi: "
There was an accident in the high seas. Fishermen nearby came to the rescue and took the injured into their boat.

Then suddenly a Minister turned up with the police. He got wind of the incident and requested to be taken there. Suddenly the Minister directed police to take the victims into their boat."
Tak faham. Rujuk kpd orang yg sama ke apa?

Political animals will make an issues as political millage..never sincere to do for rakyat..shame on you all

I can guess which menteri already. Few are in charge on marine matters.

Typical problem of msians. Malas fikir. Given name, they wouldnt want to believe if it involves someone they know.