There was an emotional send-off at the Palace of Justice last Friday.

It was the last day for the out-going Chief of Justice, Tun Ariffin Zakaria after 25 years service in the judiciary. Now that he has retired, he will have more time for golf.

He will not be bounded by judiciary ethics and could play with anyone he wish. It is sad that an anonymous blog attempted to smear his good name to insinuate he was a corrupt and had his golfing paid by contractors.

If it is for certain, it should have been raised when he was in office. It was mean and insensitive to raise it on his last day.

However, it is not the first time for Ariffin.

He had his fair share from the opposition when the Federal Court upheld the Court of Appeal decision to convict Dato Seri Anwar for sodomy in February 2015. 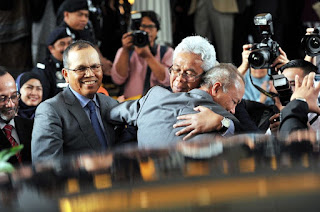 In his farewell speech, he said he had fulfilled the four promises made upon taking office as Chief Justice in 2011.

However, few days before his retirement, former Court of Appeal judge and now a member on the MACC's Operation Review Panel and Special Panel, Tan Sri Mohd Noor Abdullah commented judges are "soft" on corruption and indirectly leading to the interpretation he had not live up to his mark.

Judges should be sensitive to societal needs and problems. Mohd Noor may have felt judges' sentences are not responding to efforts by MACC to combat the crime.

He said judges are handing out too light sentences. The fines does not commensurate with the amount stolen from the public, and the social, economic, and political damage on the country.

He believed those guilty of corruption should be jailed!

Md Noor maybe considered unpopular to certain people in the corridor of power for statement he made in the midst of the 1MDB investigation in January 2016.

However, this is one judge known to have no fear or favour. Simply because it is said he is one judge who former Federal Court judge and now Anwar Ibrahim lawyer, Dato Gopal Sri Ram, could not bully in the days in the Court of Appeal.

Now that Sri Ram is no more a judge, there is no more fear of him applying the Contempt of Court.

The law was partly meant to stop public discussion that could influence or disrupt judges decision. But it became handy for some judges to abuse and place themselves as the perfect man ("insan kamil") above other mortal.

Before Sri Ram became Anwar's lawyer, it was suspected that he is compromisable.

On Mohd Noor's past statement, he did not take too well with Attorney General, Tan Sri Apandi Ali's statement in 2016.

It could be misinterpreted as directing MACC to stop investigation. He said it is not his "exclusive rights" and MACC should continue to investigate.

It is a matter of personal opinion, thus fair comment to come from a former judge. As long as comment is not meant to influence judgement, there should be a small leeway for experts to make fair comments on judges decisions.

Furthermore, there was a general appeal - political or otherwise, in his view then that, to quote, "Any public decision made in bad faith (by public officials) can be challenged in the court of law."

On his latest comment on "soft" judges, it is appealing too. Not all judges, maybe 20%? 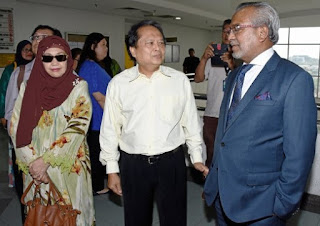 It is unbelievable that the testimony of 34 prosecution witness could not prove the basic charge under Section 11 (a) MACC Act on the existence of corruption.

Shafee did not have badgered the witness, but he certainly is worth the premium legal charges for raising trouble issues with witness testimonies or technical legal issues.

If there were 34 witness, the gut feel of a common person is that there exist corruption.

So it unthinkable to us mortals that the common law judges in High Court and Court of Appeal viewed there is no prima facie thus case dismissed without the need for defense.

It reminded us of the case MACC loss against Dato Norza Zakaria, in which not only the nine witnesses U-turned in court but court also dismissed charges of perjury by MACC against the witnesses.

Apparently, the defense lawyer is related to Shafee. However, lawyers are not at fault.

They are doing their job and carrying out the legal principle that every person, even the most despicable and deplorable, to use Hillary Clinton term, of human deserve the right to defend themselves in a court of law.

Even if lawyers are socialising or in-cohoot to fix or coordinate judgement, the main party at fault is still the judges.

Judge Datuk Abdul Halim Aman could have convicted, claimed a legal practitioner familiar with corruption cases. Not likely is Halim mesmerised by Shafee's legal ability, but he chose to toy on the legal definition of lending as bribe.

Maybe Halim felt that, if he not address technical issues, his decision will get overturned at the Court of Appeal. It does not look good on his resume.

More so, Court of Appeal is infested with anti-government bias judges ready to let off cases by government on mere technicality. The latest must be the decision to overturn High Court judgement to deem Penang's state sponsored vigilante group, PPS as illegal.

The Hishamuddin Yunoses and Ariff Yusoffs is the past but today, there are the Tengku Maimoons, Rohana Yusoffs, David Wong Dak Wahs, Lim Yee Lans, Idrus Haruns, Nalini Patmanathans, and Hamid Sultans on the roster.

It is making the Federal Court a busy place to be.

Every joker with money, including Lim Guan Eng, could afford to appeal up to Federal Court and will want to find technical issue to delay trial of corruption cases. 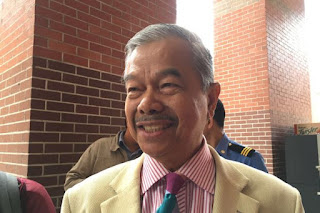 Based on such observation, this common man has basis to agree with Mohd Noor.

Former Chief Justice reply to Mohd Noor is technical, defensive, and somewhat personal to lambast Mohd Noor as "cakap kosong". With respect, it is not about statistics or quoting cases to back comment and get into debate, but fair comment made out of concern for public interest.

Corruption is no more under the table these days but above the table. The age 40 and below have no qualms to ask for bribe and kickback. The amount squandered are no more in the hundreds of thousands but hundreds of millions, accumulating to billion.

The public is screaming.

A member of the MACC advisory panel is duty bound to call on judges to act positively and be conscious of the public concern. Apandi Ali may have defended Ariffin, but it is only fair on him to defend the system.

But it is no more Mahathir era. In Najib era, there is room to agree to disagree.

Court judgements will not be respected by the common people with inconsistencies between the various courts apparent to their simple eyes.

Yours truly had personally witnessed in the past judges playing pool with members of the defense team. Could it be judges are playing golf and socialising with wrong company as happened during Mahathir era? 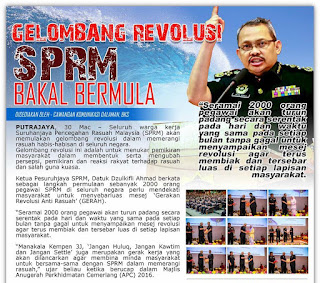 Together with the appointment of Tan Sri Zulkefli Ahmad Makinudin and Tan Sri Ahmad Maarop, as President of the Appeals Court and Chief Judge of Malaya, much hope is placed with the new team to support campaign against corruption.

Zulkifli is a master strategist and his sincerity to the cause is not in question. He could lead the revolution with his 2,000 staff force, but the court must be cooperative.


The public should "Selamatkan Malaysia", but not by supporting Mahathir to bring Najib down first and trust his offer to be judged later.

His words to the Reformasi crowd, "Let us bring down Najib first and then you can do whatever you want to me" is campaign rhetorics that will not come to reality with him back in power.

He is in his elements to fight against 1MDB but will in turn, create 10 more 1MDBs. He need to save his legacies of cronies and families.

But, to save Malaysia, it is to not let up in the fight against corruption now and be diverted by politics.

Otherwise, the lawmakers should just rid of the definition of lending of money as part of corruption in the MACC Act and allow the Shafees to win more cases.