The inevitable came yesterday and it is certainly sad.

After 10 years effort by the NGO Borneo Rhino Alliance to save and breed the Sumatra rhino species - last three Sumatra Rhino in captivity,  at the sanctuary in the Tabin Wildlife Reserve, Puntong the only female rhino left died yesterday.


Puntung the rhino dies, euthanised to end her suffering


KOTA KINABALU: Sabah has lost Puntung, the Sumatran Rhino who touched the hearts of many.

A week ago, Augustine broke the news that Puntung could no longer breathe through her left nostril and was no longer able to vocalise, was in pain and her condition was declining fast due to squamous cell cancer.

Puntung had been suffering since mid-March from an abscess inside her upper jaw that would not heal despite treatment.


Initially captured on Dec 18, 2011, the rhino attracted global attention in April 2017 through dental surgery performed by a multi-national team in the Tabin Wildlife Reserve [read in The Star here.

She was one of the last three Sumatran rhinos in the country; now, they are only two left.

Augustine in a statement issued to the media said that Puntung’s keepers Wilson Kuntil, Hassan Sani and Samad Gubin had been sleeping for the past week with Puntung in her forest paddock, to ensure that she was under 24-hour observation.

They were very attuned to subtle changes in her behaviour and reported periodic bleeding from the nostrils, he said.

“The carcinoma had been growing rapidly in size and there were clear signs that Puntung was experiencing significant breathing difficulties. In consultation with our rhino reproduction advisers at Leibniz Institute for Zoo and Wildlife Research in Berlin, and others, the decision was taken to end her growing discomfort, and bring forward the planned date of the procedure.

“Previously, we planned to euthanise her on June 15. In pursuit of the aim to allow Puntung to contribute to the survival of her species, her ovaries were rushed to the Agro-Biotechnology Institute, Serdang,” added Augustine.

Simultaneously, Indonesian reproductive specialist Professor Arief Boediono was flown in from Jakarta, ready to recover any egg cells that might be present.

“If any oocytes can be retrieved and matured, frozen sperm from the male rhino Tam will be thawed for intracytoplasmic sperm injection by Professor Arief. We will know the outcome within a few days,” Augustine said.

In addition, tissue samples from Puntung are being provided to Malaysian institutions so that her genome can be preserved through cell cultures.


An extract from The Star report summed up the desperate situation in the last ditch attempt to breed Sabah rhino in captivity:


Sumatran rhinos are considered extinct in Malaysia because they have not been seen in the wild for over a decade. 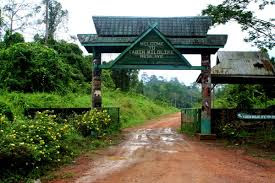 Information on the home of the three rhinos at Tabin Wildlife Reserve near Lahad Datu.

Tabin "was gazetted in 1984 under the Forest Enactment, 1968 and classified as a Class VII Forest Reserve. The reserve has an area of ​​120.521 hectares and is a protected area which is the largest in the state of Sabah. This reserve is a Tropical Rainforest that is rich with biodiversity."

It was "declared a wildlife reserve primarily on account of the large number of animals inhabiting its forests, some of which are highly endangered. The three largest mammals of Sabah – the Borneo elephant, Bornean rhinoceros and tembadau (Bos javanicus), are all found within the reserve. The elephant population has been estimated to 120-300 animals in 1993. Other ungulate species include sambar, muntjac and mouse deer. In addition seven of Sabah´s eight primate species are present, among them orangutan and proboscis monkey. However, these two species occur in relatively low numbers in the reserve. The biggest predator in the reserve is the Sunda clouded leopard. There are also several other smaller carnivores in the reserve. Of bird species, 42 families representing 220 species have been recorded."


It is funded by the Sabah government and corporate bodies like Sime Darby, who was believed to have spent RM13 million over time. BORA received support from World Wildlife Fund and technical assistance from scientific institutions, NGOs and public abroad.

Unfortunately, not much is known of this effort initiative supported by Sabah Chief Minister, Dato Seri Panglima Musa Aman since his appointment in 2003.

Contrary to the slander threw by opposition, Musa has quietly started program for the conservation of Sabah forest and reviving from the devastation of the past. An overview of the changes in policy on forest land use and management in Sabah can be found in this academic paper by here.

According to cleanmalaysia.com here, much progress have been done:


“Totally Protected Areas in Sabah now cover 1.8 million hectares,” said Sam Mannan, the director of the Sabah Forestry Department, in a recent interview with Mongabay. His aim is to increase that number to 2.8 million hectares, or 30% of Sabah’s land area, in the next decade.

It sounds like a big goal, but Sabah is already well on its way. Even now, Sabah is drawing up an ambitious plan to protect another 260,000 hectares of forest. Meanwhile, Sabah’s income from forestry dropped 97 percent from 1973 to 2014. The trend of protection has been present for some time – since 1990, the extent of protected forests in Sabah roughly tripled between 1990 and 2015.

Sabah have done far better than Sarawak, which though is known from its forrest management but  still suffer from widespread illegal logging activities.

Sabah effort received acknowledgement from scientists at the Royal Society of Britain in as far back as 2010 and commendation from WWF in 2014.

Retruning back to the Sabah rhino, let us all pray that the last ditch effort could still make it:


May all of us be protected from wrath of god from the evil and corruption of others:


"Corruption doth appear on land and sea because of (the evil) which men's hands have done, that He may make them taste a part of that which they have done, in order that they may return."