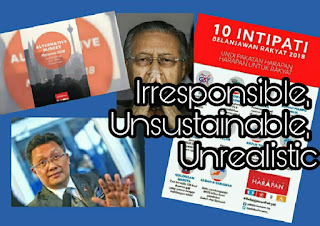 1. The alternative budget unveiled by the opposition today can be summarized by three words – irresponsible, unrealistic and unsustainable.

2. They told us they would spend wisely, they would cut taxes and they want Malaysians to choose hope.

3. They would never tell the Malaysians the fact that the operating expenditures (OPEX) in Penang and Selangor have increased manifold since they took over the state in 2008.

4. In fact if they had spent wisely in their respective states, their operating expenditures would have decreased instead of the opposite.

5. And then there’s this promise of cutting taxes which is to eliminate the GST and to reduce the excise duty for vehicles.

6. On top of that they also promise to abolish toll, provide free education and saving RM20 billion from fighting corruption.

8. Not withstanding the fact that abolishing tolls, providing education and increasing minimum wage will cost hundreds of billions of Ringgit over the long term.

9. These promises would not create jobs, boost income or reduce cost of living instead it would cause businesses to stop hiring, existing workers would lose their jobs, credit rating agencies would downgrade government bond ratings which will lead to higher borrowing costs for the government and many other catastrophic effects not only to the government but also directly to the people.

10. In Penang for instance, the so-called C.A.T practiced by the state government didn’t stop the Chief Minister to abuse his power for personal gains.

11. Year after year, they continue to hoodwink the people, and this only goes to show that the opposition is only as good as their words.

12. The World Bank, the IMF and credit rating agencies have commended the current government for taking the right approach towards a sustainable fiscal policy by implementing GST and rationalizing subsidies. Meanwhile the opposition is promising to implement the exact opposite of those policies.

13. Malaysians should realise that the only budget that matters and will impact them positively is the budget that will be unveiled in the parliament by the Prime Minister Dato’ Sri Najib Abdul Razak on Friday.

14. We should never jeopardize our future by counting on the false promises of the opposition. This is a responsible government that does not just think about the current, but also the future of this country. One thing that we are sure we can count on the opposition, is, they will most definitely stage a walkout just like what they did in 2017 Budget presentation.