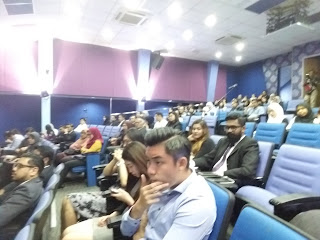 It's December 14th today. Gosh the year is almost over.

Time passed by fast when you keep yourself occupied. So occupied that hardly have time to update as regularly as desired. Only today could finally come around to share an observation subsequent to a December 4th event at UiTM in Shah Alam.

A lawyer extended an invitation to this talk by US Supreme court lawyer, who taught at Harvard and Stanford University, on Criminal Litigation in the US. It was quite the usual campus scene with the presence of students, and professors but the presence of media.

In anticipation that forfeiture law will be discussed and perhaps being asked because you know why, few close bloggers and facebookers was extended the invitation.

True as expected, the civil forfeiture and criminal investigation on 1MDB-linked issues by the US Department of Justice was asked. The notable lawyer in the US legal circle (read Wikipedia here) is an expert who could shed light on the matter.

It was an opportunity for those present to hear an honest answer from an academic perspective and opinion of a practitioner. He spent most of the time stating the facts than giving his personal opinion.

Nevertheless, he gave a point of view that is not crowded and convoluted by the trial-by-media game and propaganda led by Tun Dr Mahathir. 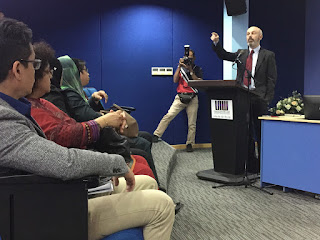 The first to put up a post on the event was Captain Seademon here. The snapshot would be in TV3 news below:


In case, TV3 is seen as UMNO propaganda tool then lets hear snippets of Goldstein's explanation of what forfeiture law is and its academic explanation:


The Star highlighted here the controversial element of the forfeiture act which regularly get questioned in the US Supreme Court.

Then came the 1MDB question from the floor:


Goldstein did explained that civil forfeiture involves property and not a person:


So there is no person or any person including Jho Loh and those with initials, yet being charged for anything. Few media sources highlighted - Bernama here, FMT here and Sabahkini2 here. Malaysia Today here highlighted no action against 1MDB.

Goldstein answered inquiries on the current situation on the case: 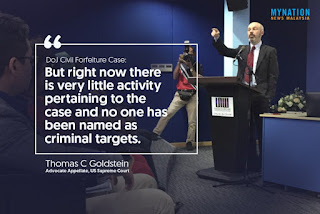 Malaysiakini here took to report it as it helped to counterspin the actual situation seen by a practitioner and academician.

The Mole here see the angle that it is a standstill situation.

And, obviously Mahathir's propaganda through Sarawak Report and international media was lying through his teeth, claimed The Unspinners here.

For a good 24 hours, the opposition was stunned by Tom Goldstein's honest statement.

One lawyer accused him a hired gun but it is known that the lawyer is linked to Perak's Deputy UMNO Youth Malaysia, whose stand on certain thing is known.

The lawyer himself is not as clean as a whistle and The Unspinner here claimed he was removed from running for office in the last general election.

One bird-brained tried the usual trick to deny Goldstein's credibility by claiming he is a fake DOJ unlike Jeff Sessions who is the current AG from DOJ. Well, to put mildly, he has more credibility to talk of law and forfeiture than Mahathir, Clare Brown and all the reporters at international media.

Jeff Session spoke at Global Forum on Asset Recovery and he called 1MDB scandal as ‘kleptocracy at its worst’.

The Malaysia Insight here, Malaysiakini here and The Edge here took the quote as headline. All the regular suspect of international media used the same headline.

It was a saviour to counter Tom Goldstein's talk at UiTM. Jeff's full speech can be better undertood from his Alabama twang in DOJ website here.

Lim Kit Siang jumped in the fry with his own trademark turn-the-table back style of spinning. Read FMT here. Mahathir in his blog. And their pom pom girls here and here.

As The Mole column here seemed amaze was the frantic response over an academic discussion. He claimed Sessions said nothing new from the two DOJ applications to the US court.

It would have been more current should Session elaborate the status of the forfeiture as done by our local Facebooker Leem Nor here voluntraily did. There is 21 of the civil forfeited asset still under stay. While the movies under red Granite reached settlement in principle. Three cases is still undergoing. 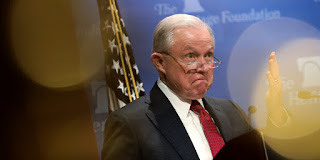 Could Sessions statement be a response to Goldstein here in UiTM?

If so, it shows desperation but no one will believe it. Sessions could have time to tamper his speech to subtly respond to Goldstein. He surely knows who Goldstein is.

So far, Jho Loh is not being questioned and he ignored to leave few art pieces forfeited unchallnged. That would not help DOJ build a criminal case. And by the look of the assets forfeited, he could hardly claim RM3.5 billion was forfeited.

Lets give due respect to DOJ. TMI put it this way here.

To the officers involved, this kleptocrasy case is one that makes a career or movie contract one day. They would be dedicated to pin "these buggers" even if it takes decades!

It will take decades because the case is at a standstill as Goldstein explained to blogger Captain Seademon here that:


Only Tun Faisal, a journalist from The Mole, and I, managed to bring our food and sat at the same table with Tom.  Tun Faisal and I asked the questions on IPIC, SRC and 1MDB where Tom mentioned the complexity of the case and why there is absolutely no progress whatsoever – the complainants who are in no way linked to 1MDB lodged a complaint with the US Department of Justice saying that money had been siphoned from the 1MDB, to which the 1MDB had denied losing any money.  So to whom should the money be returned to if no one has lost any?

And to this I asked Tom if this is the reason it has taken the DoJ so long to actually initiate something, he answered with a simple, “Yes.”

In other words, the probe has come to a standstill. The only reason they have asked a stay on the civil investigation and changed it to a criminal one is to NOT allow any of the money to be spent.  To date, no one has been named as criminal defendants, not one charge has been filed, and not one targetted to be investigated on a criminal charge.

The US AG could be attempting to send a message just like the Russian warships guised as merchant ship coming towards Cuba in Cuban missile crisis was Societ Union Premier Nikita Khruschev communicating with President Kennedy.

What the message is, God knows! As the Mole column described the situation, "DOJ is still on the first batter in the first inning but some Malaysians are already claiming victory for the American law enforcement baseball team."

As one corporate player, who faced a long drawn legal battle in court, told yours truly, "The public know shit about the law. Anyone can talk - be it prosecutor or defense lawyer, but they are all talking cock."

Talking cock is a Malaysian and Singaporean expression to mean "to talk nonsense or engage in idle banter".

More so, their frantic response to crowd another point of view proofs the opponent to Najib are doing a trial by media. Even the US AG and DOJ is talking cock and guilty of trial by media.

Not only Jeff Sessions and Loretta Lynch is judging the accused as guilty through media hype, it an open secret in the US among lawyers there that the Wall Street Journal is a mouthpiece of DOJ. One source claimed the WSJ and DOJ worked hand-in-hand in an attempt to corner a local law enforcement innocently attending a conference abroad.

The lawyers in court could be involved in court talk but the corporate player, whose on-going case could be acquited and the judiciary face a major embarasment, insisted they too are talking cock.

He explained that both sides could only present from their "biased" point of view in court and in the media in favour of government or clients.

At the end of the day, judges have the final and only say. He or she is the cock. Their decision will not be based on what WSJ report, far from what Clare Brown spin and prsecutor or defense lawyer version, but on evidence and rule of law.

If the lower court judge erred, there is the process of appeal till the last decision at the Federal court for those who could afford. That is talking court. It is the nearest and safest route to the truth other than divine truth.

This case could take decades or as Goldstein told the audience, 9 out of 10 criminal cases ended up as plea bargain.  The full story will never be heard.

If the DOJ decide to pursue criminal proceedings, the burden of proof falls on the accuser. They will need to get an indictment in front of a grand jury, bring the case forward, to proof beyond reasonable doubt and the whole shebang!.
at 12/14/2017 03:24:00 PM

When it come down to the heinous 1MDB kleptocracy that shocked
the globe. Eradication and totally erased dumb and dumber najib.
Isn't too far off.
Najib thieving at the expense of pooring his nation wont go away.
If the shocked from the last umno PAU 2017 isnt an indicator najib
cannot be challenge. Which is insane if umno isn't a Zimbabwe.
A humpty dumtpy najib must be sitting on your wall wearing his emperor new cloth.
The falling of najib regime is certain that he, A humpty dumpty cant be put together again
with a fall awaiting.