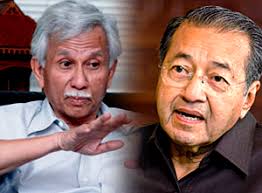 Since he claim #Taktau, Tun Dr Mahathir has limited room to convince the public he is innocent of the now disclosed humongous BNM forex trading loss of RM31.5 billion.

He can't go on to dispute and sue RCI, blame on Dato Najib, Dato Murad and BNM, and claim conspiracy against him It is politically damaging. The person revealing the actual figure is an alleged ally in the 1MDB fix-up. and it has silenced him from using 1MDB as campaign material for 6 months.

So he resort to the generic propaganda strategy Tan Sri Sanusi Junid oftenly employed through his entertaining and sometimes made up revealing story-telling:


If you can't convince, confuse them.

Just like raising dumb issues could only open more Pandora boxes, attempt to confuse the public only raise more questions.

Mahathir made the absurd claim that Dato Najib lost more by selling the equivalent of RM160 billion worth of US dollar from the country's foreign reserve throughout 2013 to 2015 through intervention.

It only reveal more issues on sales of GLC shares and questionable nature in the sale of MAS shares to cover BNM negative capital and depleted country's foreign exchange reserve. 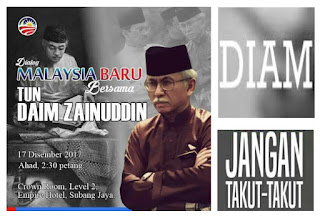 Perhaps the explanation should be best addressed by Tun Daim, who recently came out to speak.

Instead of speaking on ECRL and other matters with a small closed group of people, Daim could explain publicly these unusual observations on the sales of MAS to Tan Sri Tajuddin Ramli:


Was the purchase of MAS shares pre-arranged and facilitated to obtain a bank loan of RM 1.792 billion?

It is the biggest single loan ever given by Malaysian banks to any person.

The loan was secured in a Malaysia book of record time of about three months at a time loans of RM200 million then could take 6 months, the fastest.

It had also exceeded the single customer limit imposed by BNM and a waiver given by BNM.

In addition, the Ministry of Finance had also waived the stamp duty on the loan agreement and the transfer of shares.

Is it true that these waivers were all given without the borrower's asking? Back then, the rumor and subsequent confirmation for such a huge deal (to pun Trump's favourite word) was unusually fast and decisive.

On top of that, was there a buy back agreement because RM8 per share was too high to buy and fair value for controlling interest is at RM5 per share?

Mahathir deny it was a national service and sacrifice called upon on Tajuddin. In his book, he claimed it was merely a typical commercial transaction. 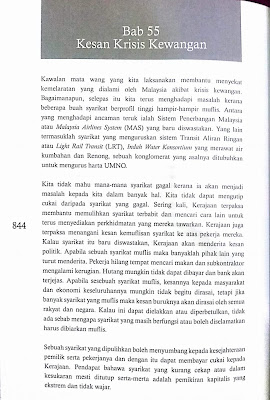 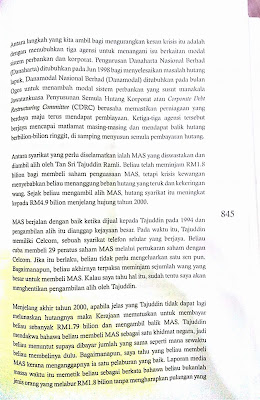 It was understood by the financial industry back then that it was a national service by Tajuddin to avoid the national economic devastation.

Tajuddin was blamed from MAS decline but the buck begins with the deal. Many may not be sympathetic but he has suffered greatly for the sacrifice. 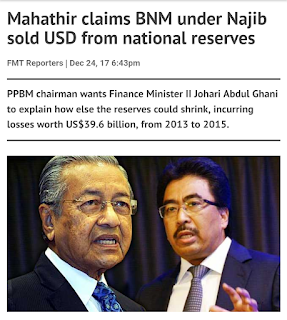 Mahathir's insisted to use his blog here still make an issue out of the non-issue of intervention in the ringgit market is considered a loss.

He forced Jo Gani to reveal more on the sales of those shares. His statememt in full below:


AN OPEN LETTER FROM JOHARI TO TUN MAHATHIR MOHAMED

1. Many of my friends who are readers of Tun’s blog, have contacted me for clarification regarding Tun’s latest writing entitled “Dear Mr Johari” on the issue of speculative foreign exchange transaction. At first I told them that I have already said enough about the subject matter and I do not want to prolong the discussion on this issue especially since there is already an independent team at PDRM investigating this matter. The subject of foreign exchange activities can sometimes be too technical a subject for the ordinary man on the street to understand, particularly in relation to the role of Bank Negara Malaysia (BNM) in the management of the country’s international reserves. However, I felt it best that I try to hopefully close the discussion by putting the matter in simple perspective for ease of understanding.

3. To put the matter in perspective, it was highlighted in an Internal Audit Report prepared by BNM’s Internal Auditors dated 21 January 1994 that the Foreign Exchange Operation Division of the Banking Department in BNM was involved in voluminous foreign exchange trading activities so much so that the monthly maturing buy and sell foreign exchange transactions which amounted to an average of RM140 billion in 1992 had increased to a staggering RM750 billion in 1993! The substantial portion of such transactions was very speculative in nature and did not reflect BNM’s mandate to maintain orderly condition of the foreign exchange market as per Section 4 of the Central Bank of Malaysia  Ordinance 1958.

4. The said Internal Audit Report also highlighted that the magnitude of such foreign exchange speculative transactions was considered very excessive given that the shareholders’ fund of BNM was only RM4.4 billion and the country’s international reserves were merely RM43.98 billion at that material time. These speculative activities had caused BNM to suffer foreign exchange transaction losses amounting to RM31.5 billion during the period under review.

5. The Audit Report also stated that the voluminous speculative foreign exchange trading activities that the central bank had undertaken during that time were carried out by the Foreign Exchange Division of the Banking Department of BNM, headed by its advisor/manager then, a Mr. Nor Mohamed Yakcop, whom later became the Minister of Finance II of the country.

6. Because of the scale of these foreign exchange speculative activities losses, the Government was forced to transfer its shares in Telekom and Tenaga Nasional Berhad to BNM at  the nominal value of RM1 per share and these shares were immediately revalued by BNM at RM22.10 per share and RM19.30 per share for Telekom and TNB respectively. In addition, BNM had to dispose off its Malaysia Airlines shares to a third party at the price of RM8 per share and MISC shares at RM10 per share to Kumpulan Wang Pencen in order to realise the gain. If these speculative foreign exchange losses were not real, the Government would not have taken these drastic actions in order to cover the BNM losses at that material time.

7. BNM and the country have since come a long way, particularly in instituting the necessary reforms and check and balance with regard to its foreign exchange forward transaction activities. As a result of these reforms, despite volatility of capital flows and the ringgit in the recent period, our economy continues to remain resilient and BNM’s ability to safeguard the financial and economic stability remains uncompromised. In fact, our international reserves continues to strengthen ever since and as at end November 2017 the reserves amounted to USD101.9 billion and were able to support 7.5 months of retained imports. I have said enough on this subject and if understanding of the truth is not the objective of the discussion, then there is nothing much I can say on this.

8. I wish Tun and family the very best of health and a very Happy New Year; may the New Year be peaceful and prosperous for all of us Malaysians. 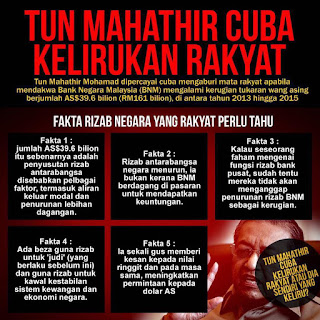 Mahathir is desperate to convince the public that he trully #Taktau. Tan Sri Nor Yakcop may have advised a path to spin.

Accounting wise, it is absurd to claim the sales of US dollar for intervention to stem any sharp decline of ringgit as total loss.

It is an outright sales in exchange of Ringgit thus there is something gained from the sales. Decline in reserve would re-appear as increase in money supply in the money market.

An FB lambasted Mahathir for this attempt to lie and confuse the public:


There is no such thing as lost of USD39.6 billion from intervention.

If the figure is true, bearing in mind this #kelingkeralakutty is a liar and manipulative, it is only money converted to ringgit by selling US dollar reserve against ringgit.

Itu baru betul pure lost from speculating or in other words, blindly gambling.

No water under the bridge

The suspicion is this line of argument is intended to mislead the public into thinking Mahathir did not lose money by downplaying the loss as decline in reserves.

There is the likelihood that the losses were massaged into foreign exchange reserve. In 1993, before the forex losses were revealed in 1994, reserve rose by an unusual rise by RM25 billion.

An interesting attempt by the PPBM cybertrooper to divert the issue is to consider it as water under the bridge and focus to current problem.

The figure of RM31.5 billion is too big to ignore. It would have then put together a network of road throughout Sabah and Sarawak.

Another attempt is to claim reserve management is also speculative.

Sorry, there is a different between realised loss from gambling and managing reserve to match exposures or intervention.