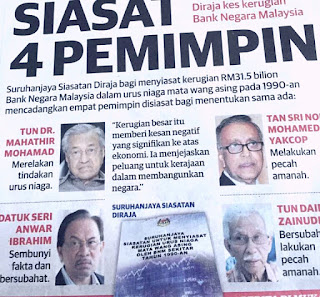 Some claim he has turned senile or suffering from dimentia for repeating the same allegations and name calling. Having followed him for many years, he merely took a page from the manual of Nazi propagandist Joseph Goebell to repeat a lie till the public believe.

True enough, senility may have creeped up on him as his name calling has gone overboard. It backfired on the son of an immigrant Kerala Kutty to call Najib as Bugis lanun and send him back to Bugis land.

It not only angered the Bugis descendents but the royalties and Indonesian politicians.

Mahathir hope it would go away since he stereotyped "Melayu mudah lupa". It did not and recently Sultan Johor described him as racist and a former Indonesian Minister called him an ill mannered old man.

There is a trend in Mahathir's name calling antics.  It is actually reverse psychology at work to cover-up his own and same wrongdoings. It is he who is the "penyangak, pencuri, penyamun & perompak".

By labelling Najib, he hope to divert attention from his own wrongdoings. 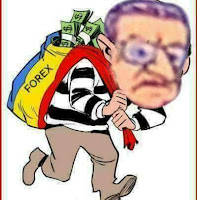 Since the mystery of BNM's forex loss and financial crisis on 1997 unraveled to show Mahathir is personally responsible, there is no more turning back for us.

Now that it is out in the open, we are now talking.

Our estimate of the BNM forex loss is only around RM5 billion. Even that is too much because any forex dealing operations has a cut loss trigger limit.

The traders will then take a rest. If he is not fired, he will be asked to go for vacationn to calm his nerve before returning to trading less aggresively till he revived his confidence.

Why did it went on continously day in day out for many years and got more aggresive?

There is a high possibility that the balance of the RM31.5 billion is squandered.

Police will have to investigate and do forensic auditing Who knows it may wind up in Buenos Aires or Montevideo or some third world banks.

The modus operandi for the squandering would require creating fictitous foreign exchange losses. It need to be investigated which bank were the trading counterparts the led to the losses.

Tan Sri Nor Mohamed Yakcop is right thick in the centre, Though he took responsibility, it does not stop there. Was he in-charge of the forex processing side and accounting.

It is supposed to be separated from dealing operations. Was it so? Did he exert influence on officers to manipulate the transactions and profit and loss?

Most dangerous side of Nor  Yakcop is that he is the godfather to most of the GLCs CEO.  They honoured him when he quit politics and cabinet.

Najib should consider chopping some heads like the CEO of EPF. He has been working hands in glove with opposition supporter, Eco World Development Berhad

As for Tun Mahathir, Dato Seri Anwar Ibrahim and Tun Daim, they will have to face the music.

Lim Kit Siang should be happy since his 25 years struggle finally paid off. It is ironic that he and his son is defensive of Mahathir and the gang now! 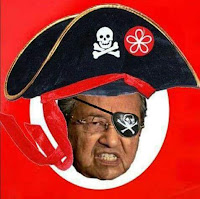 "Penyangak" is Malay for thug. Mahathir intended to label Najib as such for firing a series of law enforcement officers and government officials.

He is merely covering up for his own thuggish behavior.

"Pencuri, Penyamun & Perompak" means different level acts of stealing from petty thief to armed robberies. He labelled Najib for stealing on the unproven allegation he took out RM2.6 billion from 1MDB.

Najib explained it is donation and WSJ reported he had returned the money to the donors. He only used RM60 million for party campaign purpose. But the PPBM numbnuts are still repeating it as Najib squandering RM2.6 billion!

The sum of RM60 million donation is a far cry from the "Pencuri, Penyamun & Perompak" acts of Mahathir to enrich his family, proxies and cronies.

The money from the BNM forex trading could have disappeared through fictitous forex loss transactions in the tune of tens of billions!

There is a lot more not known yet. How much is taken away through Tan Sri Arumugam whose hand is in every power deals in the country?

Many may have forgotten of Dato Abdullah Ang, whose was supposed to start the first Malaysian sogososha, MOIC. He ended up facing prison sentenced but was spotted around town and never actually served his sentence in prison.

Mahathir has a hand in every water deal too.

He is now restless and calling on many of his past supporters who he not realised have left him after being victimised. There is the hunch that Mahathir is hiding and worried of something bigger than what have so far been disclosed.

It is not easy to build a case on a 25 year old crime. Many witness are dead and documents lost, even burned. So they will likely underestimate police and perhaps attempt to bribe the Commercial Crime Investigation Department of the Royal Police.

They could hide from the rakyat, but not from Allah. Sooner or later, it will be their time to meet the maker.

To his victims, whose money and wealth are stolen or denied, the perpatrators can hide it in Switzerland or Montevideo or some third world money centres.

Mahathir and his gang of thieves has lost their dignity. No money or good lawwer can win back lost dignity.

Allah is great and Allah is just. The Quran promised that all wrongdoers will get punished on this earth itself. The punishment in the after life is worse or inconceivably worst!

Just to answer your Questions
Do you dare to publish

Writer dare wrote that Madey have been calling Najib those labels. Can you read?

Very few are innocent. We know the scandals that began before Mahathir's time and then got worse each year. Let's also not forget the BBMB murder, the MCA finance Kooperasis and MIC's Maika. But these were not on the scale of current scandals. It wasn't very polite of Mahathir to label all Bugis as pirates. He was referring to just one - that was long time ago - just after the British acquired Singapore. But it stung - hence the reaction from our southern royal. It hates Mahathir for removing the ruler's sovereign immunity. But of course the elephant in the room is the jail sentence handed down by (then) Justice Raja Azalan Shah to its later ruler, his subsequent involvement at the golf course death, etc. There was also a case of another ruler who was held hostage in a London casino until the Federal Government paid off his (multi) million dollar gambling debt! So what do others do? Monkey see, monkey do. There were and are many damaged men and women who have broken laws and got off scot free.

WSJ didnt report the money returned to the donors of Najib's version but returned to Tanore Finance where the money came in the first place.you purposely mislead readers on this