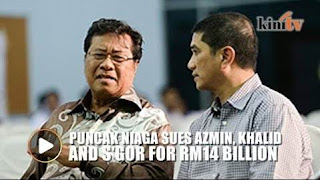 The political intrigue of the Puncak Niaga lawsuit continues.

The lawyer representing Puncak Niaga turns out to be the firm of Sreenevasan Young, in which Gopal Sreenevasan is the brother to Ambiga. The lawsuit have been given a political twist by UMNO propagandist to showcase something negative on Azmin's administration.

It come at a rather odd time when Tan Sri Khalid Ibrahim have came out in the open in support of BN in Selangor. It makes Selangor more fluid as PAS used to oppose the sacking of Khalid.

It gets more interesting because Azmin's lawyer is from the firm of Daim and Gamany in which they were exposed as representing Selangor government in the controversy on the alleged Ijok land scam involving LCBN and the one currently being developed by Eco World and EOF.

Tan Sri Khalid Ibrahim is being represented by Bon and Associate. He is seeking to strike out the suit on the basis that he is not a public officer under the relevent law. His lawyer, New Sin Yue claimed it will fail in any trial. More case on the legal status of public official.

Azmin has also instructed his lawyer to strikeout the suit but The Edge here did not mention the basis of his filing.

So what game is at work if lawyers known to be on same sides politically are at each other in this lawsuit. It could mean Puncak Niaga is not suing on political ground but on business interest.

Off course, there is always the remote possibility that it is all a show and there is collusion when lawyers on the same side are battling each other.

There is also the possibility that Gopal is not politically in sync with her sister or have family dispute. Ambiga could be a real problem to her family.