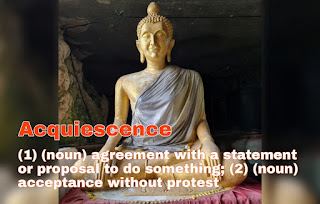 Blogger Depa Kata Lah questioned the claim Sakyamuni Cave Monastery is more than 100 years old with the argument they only first applied for permit in 2014.
Its a simple argument commonly used in political debate. The argument is rather dry, cold, and in your face. Unfortunatey, it has legal relevance.
When Perak state issued the land lease in 1960 and approval for quarry operation in 1964, did the Cave Monastery protested?
On the hand, the Caves Monastery may get legal relief from the acquiescense. 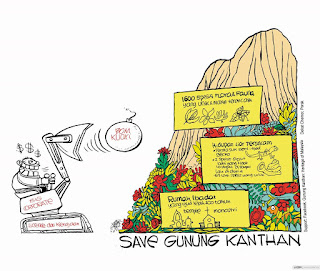 Arjun Mohanakrishnan of TheVibes.com made few reports in support of the Cave Monastery against eviction notice by Associated Pan Malayan Cement (APMC), now a subsidiary of YTL Cement.
His stories covers the eviction, the historical and religious significance of the Caves Monastery, environmental argument, Geopark and Hndu temple, and response from APMC.
The cause gained support of political cartoonist for Malaysiakini, Zunar. Their online petition on Change.org is close to securing 25,000 signatures of support.
On the other hand, their informative Kinta Valley Sakyamuni Cave Monastery Facebook has limited followers and its likes hardly surpassed 500. Their You Tube campaigns are getting few thousand viewers, but the most likes received to date is 110. 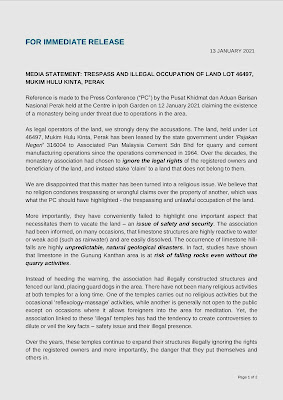 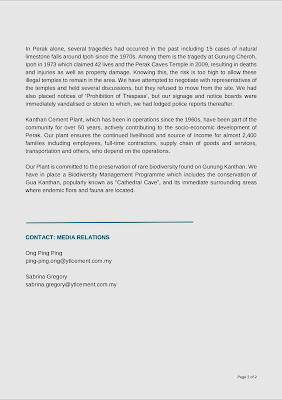 From the APMC response as reported by TheVibe.com and press statement (above), the issue of history, religion, and to a limited extent environment may step aside to the issue of safety and legal.
The safety aspect were covered in the earlier blog posting and it is not just about the impact of quarrying activities, but the safety of the Cave Monastery, monks and devotees.
It is dependent on the respective authority to enforce, and addressed it as diplomatically possible. Most likely, the authority will await a court decision to enforce.
A glimpse of the upcoming legal arguments for the court from APMC side can be seen in their statement.
They claimed the Cave Monastery ignored the legal rights of APMC for decades. They touched on safety issue to contend that the Cave Monastery have been constructing illegal structures that endangered the safety and environment.
And, there is the "we-did-our-part" positive argument of bringing economic activities to the community and contributed to preserving bio-diversity.
According to the Cave Monastery side as resported by TheVibes.com, they have been a custodian of the mountain for decades.
Since 1997, they claimed APMC allowed the monastery to remain and practise Buddhism peacefully at Gunung Kanthan. Further more, they claimed the Lafarge plant operations gave his words to allow the Cave Monastery to exist for at least another 50 years in 2009.  .
Neither monks nor Muslim Lebai would lie, wouldn't they?
Maybe to counter this argument, APMC claimed the Cave Monastery and few affected temples have not been operating.

'There have not been many religious activities at both temples for a long time. One of the temples carries out no religious activities but the occasional ‘reflexology-massage’ activities, while another is generally not open to the public except on occasions where it allows foreigners into the area for meditation. Yet, the association linked to these ‘illegal’ temples has had the tendency to create controversies to dilute or veil the key facts – safety issue and their illegal presence.'

The legal arguments will most likely favour the leaseowner. To quote Geopark officer Ain Maisyara Yazrol as reported by the TheVibes.com, the authority acknowledged below:

“The geopark is under the PSPC’s purview, but we lack enforcement and laws that exist for state parks,” she said.
“So, the geopark is still subject to the (decisions of the) owner (leaseholder) of the land.”

Without a court order in their favour, the Cave Monastery days looks numbered. A court order will justify APMC to take action and local authorities and police will have to abide. 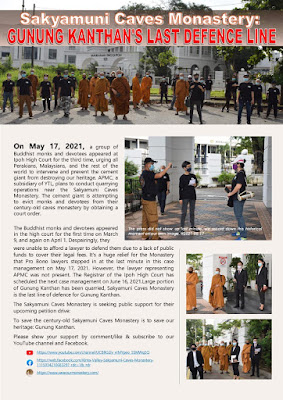 The court is certainly is the last defense for the Cave Monastery, Hindu temples and other affected entities.
The lawyers for the Cave Monastery is left with the optiom to challenge the validity of state decision to issue the lease to APMC. That means searching back documents of more than 61 years.
According to a former land officer in Perak, one way is to proof that the state government then did not take into consideration existing users of the land at the time the lease is issued.
There should be in existent land office survey report which accounts for all activities on the land, including illegal temple and Cave Monastery. If it is mentioned, the Cave Monastery could claim their existent, if not 100 years, at least 61 years.
By right, the lease should not be issued until issue related to the existing land users are resolved and settled. This is legally considered as acquiescence.
It will strengthen their case should there be a formal protest registered back in the 1960s be it on the land lease or quarrying activities.
It is left to the Cave Monastery team to do their research and gather evidence. It requires money and manpower to undertake it.
More likely than not, the legal team at APMC have got their act together. The reason lawyers are reluctant to take up the Cave Monastery case is partly the odds is against them winning against a big corporation.
The Cave Monastery may have genuine spiritual reason to stay put. However, the best they could would be to stay a bit longer to prepare for their eventual move and get a better financial settlement from APMC.
If Tan Sri Vincent Tan could offer RM2 million to the Seafield Sri Maha Mariamman Temple, Tan Sri Francis Yeoh could match it or better. A blessful and peaceful settlement for both parties.
at 6/18/2021 09:52:00 AM

Rm 2 million offer was made after someone up there made a blundder & sent in a group of undesirables to obtain vacant possession.

Rm 2 million was not done in good faith.