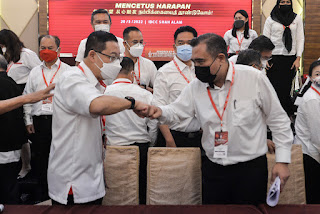 It's going against popular opinion of Anthony Loke as PH last hope to topple BN. The reality is DAP need Lim Guan Eng more than ever.

Dr Boo Cheng Hau has the basis to demand him voluntarily resign as Chairman of DAP. He is probably concerned with DAP from being seen as inconsistent.

On one hand, they are labelling Dato Najib as convict but on the other, CEC appointed a court cluster as Chairman and the face of DAP.

As expected, Dr Boo received criticism for picking on tokong. Why was it not raised earlier when Guan Eng was Secretary General?

The defense seemed shallow and insular, but it is what DAP wants.

CEC appointed Anthony Loke as Secretary General, but Sin Chew editorial puts it plainly, 26 out of the 30 elected members of the CEC are aligned to the Lim faction.

The new CEC members may have young faces and controversial ones like Tony Pua, Ong Kian Meng and Yeoh Bee Yin was left out.
However, the claimed multiracial party maintained its traditional Chinese dominance with only 5 non-Malays on the CEC, in which only one is Malay.

It is only a facade. Nothing really changed. Guan Eng remained relevant, thus why should he not be Chairman.

Even Chow Koon Yeow spoke for him despite rumour he is to be replaced by the sister Senator Lim Hui Ying as next Penang CM.

This is still guessing.

DAP may have interpreted UMNO's change in leadership in 2018 as a mistake to accept Dato Najib's resignation, chose another President and only to bring him back as BN Adviser.

UMNO still rely on Najib's appeal to consecutively win by and state elections.

Naturally, what works in the past could still work again. Loke may have replaced Guan Eng and sounded appealing with his pledges, but the line-up is still predominantly Guan Eng's people.

Loke is said not combative and soft compared to Guan Eng. He potrayed a personality of concern, refined and approachable. These are personal qualities appealing to the Malay voters that is much needed by DAP.

Chinese voters send out clear message at PRN Johor. With the trend of low voters turnout, DAP need to look beyond their traditional Chinese loyalist to stay relevant.

Recently, Loke manifested his worry of holding an early GE15 with his concern for democracy. He was quick to deny rejection of SOSMA is not against the MOU. It worries him that PM has justification to dissolve Parliament immediately. More so, PH has its own problems.

And, DAP have not changed. It will allow UMNO to still go to town on only a single Malay elected to DAP's CEC.

This time around UMNO cannot be bullied on social media like in 2013 and 2018. Sentiment favour them and they are on high spirit. They regained their pole position as the single and dominating Malay voice.

Here lies the dilemma. The need to appeal to the Malay majority vis-a-vis DAP's long standing struggle for equality to the minority is an internal ideological struggle in DAP.

DAP appeals to the Chinese as the rebel voice fighting the establishment and constraints of bureaucrasy.

Guan Eng knows it and gave a subtle reminder to Loke by raising the anti-hopping law was not tabled at the current Parliament session during the DAP Congress.

It got populist PM Dato' Ismail Sabri scurrying to commit to an April special Parliamentary session dedicated to table the bill.

That itself showed DAP need Guan Eng to push issues. Loke was seen still playing nice guy to fiddle with announcement of the April tabling.

Loke is a Chinese of Hakka origin. Unlike Lee Kuan Yew, another well known Hakka, Loke does not exude the rebel Hakka spirit. As SCMP wrote, Loke honed his political skill from working at his father's restaurant.

And, Loke is seen as an ally of Tun Dr Mahathir and heard been talking to Tan Sri Muhyiddin for some form of political collaboration.

Tony Pua, whose loss is to Loke's advantage, could not tolerate Mahathir. Pua will not condone making peace with Muhyiddin for his betrayal of PH. Both personalities are in their sunset and despised by the voters.

Yet nice guy Loke could still shower Pua with compliments. Perhaps, he is still not himself and operating on instruction. Guan Eng still call the shots.