Was Joceline Tan's column today pulled out by "heavenly intervention"? 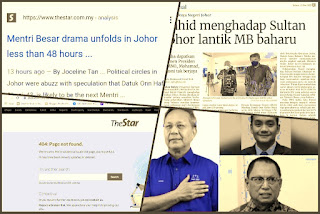 There were few curious questions raised on why there was no swearing in for the Menteri Besar of Johor yesterday Monday. In Melaka, the swearing in was held immediately the evening after the announced victory.
Yesterday evening, there were talks the new Menteri Besar of Johor would not likely be Datuk Seri Hasni Mohammad. The name of Dato Seri Hishamuddin Hussein Onn's nephew, Datuk Onn Hafiz Ghazi cropped up.
Its hardly an issue for the Sultan to exercise his prerogative to choose, but the situation does not warrant so.
Hasni was the name being campaigned as the MB for Johor and even UMNO President, Dato Seri Zahid Hamidi announced it.
Hasni should be the name proposed by the winning party and holds the majority support of the assembly. Thus, there is no need to suggest other names and no names is confirmed yet except for press speculation.
Hasni's press statement to say he is giving way to younger candidate set the lead for the possibility of Onn Hafiz. Dato Dr Puad Zarkashi as the third name does not offer any possibility.
Prior to state election campaign, Onn was talked about as a possible future MB but not so soon. More so, he had to be saved from losing Layang Layang by moving him to the Simpang Renggam's Division Head stronghold in Machap.
He is widely known to be close to the Crown Prince of Johor or TMJ as he is often referred to. However, it is unlikely that a tukar kawasan (switch area) candidate could be selected.
Joceline pulled out column
It is more unlikely and odd that Star Online could pull out Joceline Tan's column on the new MB story immediately upon publication this morning.
Was there a heavenly intervention to instruct the editor?
Joceline Tan's pulled out article below: 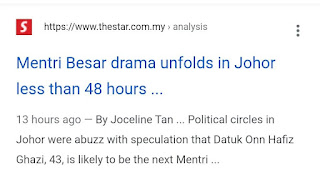 Political circles in Johor were abuzz with speculation that Datuk Onn Hafiz Ghazi, 43, is likely to be the next Mentri Besar of Johor. 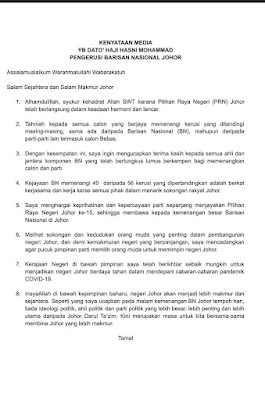 The shocking turn of events is still unfolding and the only confirmation that Hasni is out of the picture came from his press statement issued at about 7pm.

There had been absolute silence from the Barisan leadership which is said to be huddled in the conference at Saujana, the official residence of the Mentri Besar.

It is a political crisis for the coalition which won the Johor election with a supermajority of 40 seats.

Hasni’s moderate and appealing image has gone down so well with the average Johor voter.

The development will be seen by the voters as a betrayal.

Besides, Barisan had run a campaign promising political stability.

All important political events in Johor often lead back to the Johor Palace and it is apparent that the palace has other ideas about who should lead the state government. 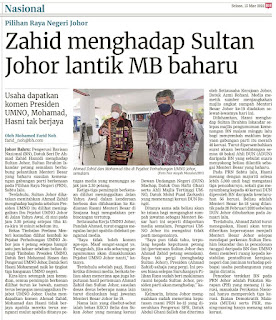 The first sign that something had gone badly wrong was when Barisan chairman Datuk Seri Dr Ahmad Zahid Hamidi and Umno deputy president Datuk Seri Mohamed Hasan returned to the Umno headquarters from their audience at the palace at about 4pm, looking grim-faced.

The pair immediately went up to the second floor and about half an hour later, they came down with Hasni.

“It was evident that something had gone wrong. They walked past all of us, ignoring our questions, and drove off in their cars,” said a Johor Baru-based journalist.

An Umno official told the media “to pray”.

By then, rumours were swirling that the palace wanted someone else as Mentri Besar.

The Johor palace is ultra-powerful and political crises involving the party’s choice of Mentri Besar are not new.

But for this to erupt just a day after a tremendous win was simply mind-boggling. 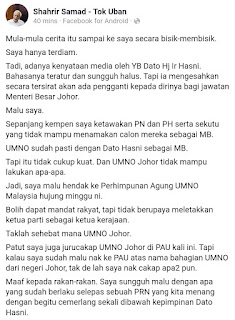 It is understood that key Johor figures like Tan Sri Shahrir Samad and vice-president Datuk Seri Khaled Nordin have been summoned back to Johor to seek a way out of the crisis.

But is it possible to find a way out once the palace has decided?

Sources said Hasni was made aware of the possible change a day earlier after a key Johor leader called on him at his official residence.

A staff member at Saujana saw his family looking downcast and almost in tears after the visitor left. 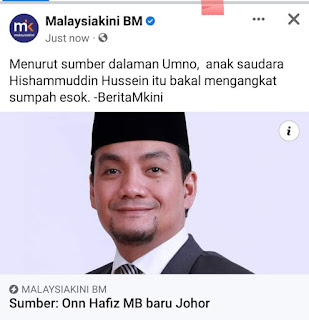 It is terribly awkward for Machap assemblyman Onn Hafiz if it is true that he is slated for the top job.

Onn Hafiz, known as OH to his friends, is the nephew of Datuk Seri Hishammuddin Hussein and grandson of Tun Hussein Onn.

It is widely known that Onn Hafiz is close to the Johor Crown Prince. The pair got along well during Onn Hafiz’s stint as a state exco member for the youth and sports portfolio.

Malay culture, said an aide to a minister, is about being respectful and what happened will not be good for Onn Hafiz.

Regardless of whether he has lobbied for the job or not, he will be seen as the one holding the knife.

Besides, he grew up in Penang where his father was a prominent lawyer, has hardly any administrative experience and it is no fun to be seen as a usurper.

As it is, he was seen as running from his original seat in Layang Layang to Machap so as to avoid facing PKR big-name, Datuk Dr Maszlee Malik. 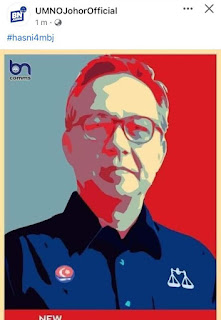 An Umno leader from Johor Baru told a journalist that if this goes through, then “we might as well wrap up all the Johor seats in a box and deliver it to Pakatan Harapan in the next general election.”

The Johor win was supposed to be a cause for celebration at the Umno general assembly starting on Wednesday (March 16).

Umno delegates were all hyped up to hail Hasni as their hero for delivering Johor.

How will the delegates receive the alternative to Hasni?

Can the Barisan leadership sort out the crisis before they convene for the general assembly?

-----------------------
Rise of Hishamuddin
There have been unconfirmed rumour within UMNO circle that Hishamuddin lobbied for Onn Hafiz's name through the backdoor to TMJ.
As a matter of fact, Hishamuddin supporters was visibly advocating for a younger state leadership after the BN win. 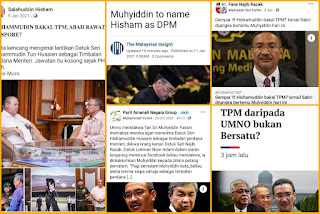 If there is any truth, then it could lead the way for Hishamuddin's backdoor entry to national leadership to by-pass Dato Seri Ismail Sabri to be next Prime Minister.
Before Ismail was appointed Deputy Prime Minister, there was already speculation, which was picked up by media, that after an audience with the Sultan of Johor, Hishamuddin could be appointed instead.
Subsequently, Hishamuddin published in his twitter of his meeting with Dato' Najib at the house of the late Toh Puan Rahah. The public presumed Hishamuddin was seeking Najib's agreement but it turned out differently.
The appointment of Onn Hafiz will set the second precedent in recent times of government appointment by-passing traditional party structure.
As UMNO Vice President, Ismail by-passed the party President and Deputy President. While Onn is hardly an UMNO Division Head to be appointed Menteri Besar.
Without any position in UMNO parent organisation and only appointed as BN Treasurer, the precedent is set for Hishamuddin.
Possibly, it could be done without the need to dissolve Parliament and hold a General Election.
The MOU with PH agreed that Parliament not dissolve before July 31, 2022. This "hijacking" of MBship and low turnout could make it risky to hold another snap election.
Perhaps, it is the ulterior motive of critics towards those casually chanting Bubar! Bubar! Bubar! on the result night and those making unfair accusation against Zahid Hamidi of disrespecting the PM.
While Zaharin Yassin @ Sang Kelembai blamed the political deviation to Zahid.
There were rumours before candidate names were announced that a mysterious list of proposed candidates for youth leaders and include non-politicians for certain constituencies were handed down to Hasni.
Stating a matter of factly, this would not be the first time Hishamuddin pulled a political manouvre without seeking prior consent from the party leadership.
The first was the Sheraton Move which involved Dato Seri Azmin Ali and Tan Sri Muhyiddin Yassin. If Hishamuddin proves successful, will there be a place for Azmin and Muhyiddin in the post-Johor PRN politics?
This reminded of Joceline's private comment shared by the late Zakhir Mohamed @ Bigdog upon a private lunch meeting at an office near pekan Ampang.
Sorry ... its too private and confidential to share.
at 3/15/2022 01:09:00 PM